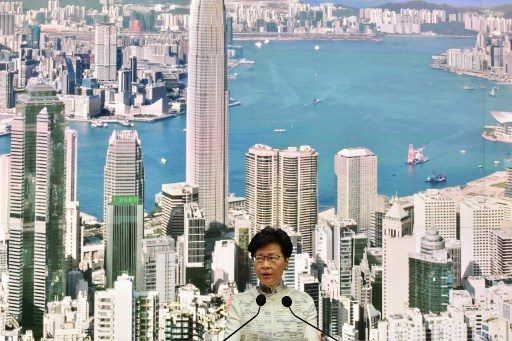 HONG KONG (6th UPDATE) – Hong Kong’s embattled leader on Saturday, June 15, said a divisive bill that would allow extraditions to China would be “suspended,” in a major climbdown from her government after a week of unprecedented protests.

The concession from chief executive Carrie Lam was swiftly rejected by protest leaders, who called on her to resign, permanently shelve the bill and apologize for police tactics.

The international finance hub was rocked by the worst political violence  since its 1997 handover to China on Wednesday as tens of thousands of protesters were dispersed by riot police firing tear gas and rubber bullets. (READ: High points of Hong Kong’s huge protests)

Those clashes came 3 days after chief executive Carrie Lam refused to be budged by a record-breaking rally in which organisers said more than a million people marched through the streets calling for the bill to be scrapped.

Critics fear the law will tangle people up in China’s notoriously opaque and politicized courts as well as hammer the city’s reputation as a safe business hub.

After days of mounting pressure – including from her own allies – Lam relented on Saturday, announcing that work on the bill would be halted with no deadline set for its introduction.

She set no deadline for its reintroduction but stopped short of saying it was permanently scrapped.

Jimmy Sham, from the main protest group the Civil Human Rights Front, likened that offer to a “knife” that had been plunged into the city.

“It’s almost reached our heart. Now the government said they won’t push it, but they also refuse to pull it out,” he told reporters as the front announced they would push ahead with a planned massive rally on Sunday, June 16.

Late Saturday, a man who had been holding an hours-long anti-extradition protest on top of a building died after he fell, the Hospital Authority told Agence France-Presse.

He had unfurled a banner saying: “Entirely withdraw China extradition bill. We were not rioting. Released students and the injured”.

Lam’s about turn was a rare concession from the city’s pro-Beijing leaders who have successfully faced down demands from pro-democracy demonstrators in recent years.

But anger over how police and city leaders treated predominantly young demonstrators is still simmering and opponents hope another huge turnout will pile pressure on Lam.

The chief executive – who is appointed by a committee stacked with Beijing loyalists – said she had no plans to resign. She defended the need to overhaul the city’s extradition laws and said she retained the support of China’s central government.

But she admitted her team had misjudged the public mood.

“I feel deep sorrow and regret that the deficiencies in our work and various other factors have stirred up substantial controversies and disputes in society following the relatively calm periods of the past two years,” she said.

The unprecedented chaos in Hong Kong comes at a sensitive time for China, already on edge over the 30th anniversary of the deadly Tiananmen Square crackdown.

“We support, respect and understand this decision,” foreign ministry spokesman Geng Shuang said in a statement.

“In the next few months there will be at least a truce,” he told AFP. “But the anxiety that this draft bill will be passed in the future, that will remain for quite some time.”

Jason Ng, from the Progressive Lawyers Group, said protesters were incensed by Lam’s refusal “to take responsibility for the excessive police force unleashed on protesters and for tearing society asunder.”

“This is unlikely to mollify civil society and we are expecting another big turnout at the march tomorrow,” he told AFP.

Opposition to the Beijing-backed bill united an unusually wide cross-section of Hong Kong from influential legal and business bodies, to religious leaders, western nations and the huge crowds hitting the streets.

But the furor was also the latest expression of public anger over fears that an increasingly assertive Beijing is stamping down on the city’s freedoms and unique culture.

Under a 1997 deal signed with Britain, China allowed Hong Kong to keep key liberties denied to people on the mainland – like freedom of speech and independent courts – for 50 years.

Critics accuse Beijing of reneging on that deal with the complicity of the city’s unelected leaders.

They point to the huge 2014 pro-democracy “Umbrella Movement” that failed to win any concessions, the imprisonment of protest leaders and the banning of some critics from standing for election, as recent examples.

The writing on the wall began to emerge for Lam on Friday when she found herself facing growing calls from within her own political camp to reverse course and tamp down spiraling public anger – including from hardline pro-Beijing lawmakers.

Beijing had vocally supported the bill and earlier this week threw its full support behind the Lam administration, calling protesters “rioters”.

But it has since sought to distance itself, with China’s envoy to Britain saying the idea for the bill came entirely from the Lam administration. – Rappler.com