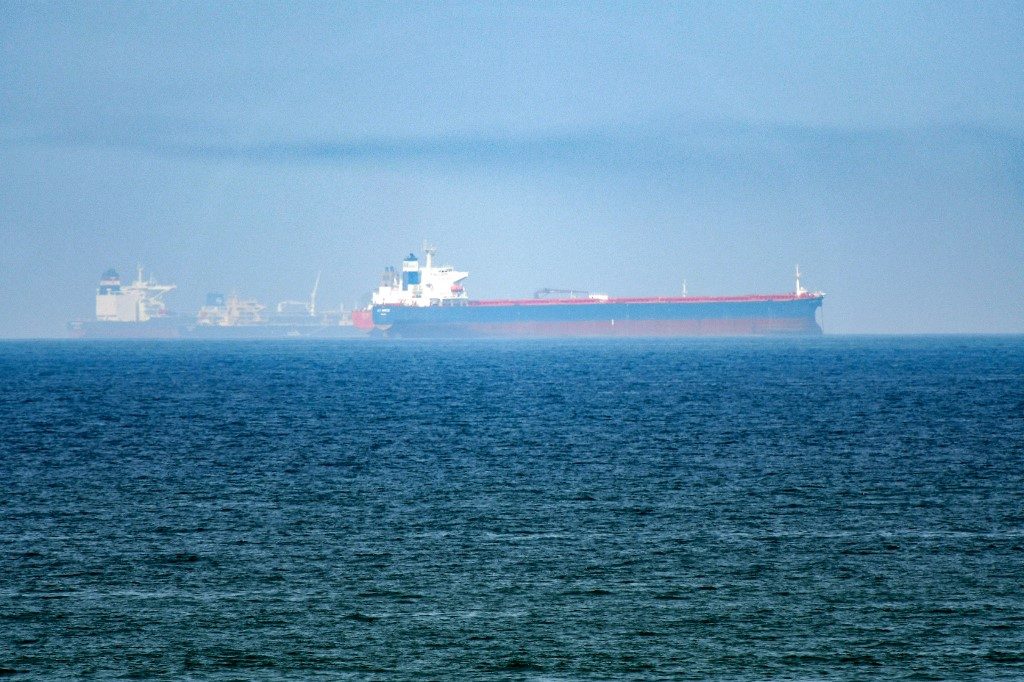 Facebook Twitter Copy URL
Copied
(UPDATED) 'We do not want a war in the region. But we won't hesitate to deal with any threat to our people, our sovereignty, our territorial integrity and our vital interests,' says Saudi Crown Prince Mohammed bin Salman

RIYADH, Saudi Arabia (UPDATED) – Saudi Crown Prince Mohammed bin Salman accused rival Iran of attacks on two oil tankers in a vital Gulf shipping channel, adding he “won’t hesitate” to tackle any threats to the kingdom, according to excerpts of an interview published on Sunday, June 16.

“The Iranian regime did not respect the presence of the Japanese prime minister as a guest in Tehran and responded to his (diplomatic) efforts by attacking two tankers, one of which was Japanese,” Prince Mohammed told pan-Arab daily Asharq al-Awsat, referring to the attacks in the Gulf of Oman on Thursday, June 13.

“We do not want a war in the region… But we won’t hesitate to deal with any threat to our people, our sovereignty, our territorial integrity and our vital interests,” he added.

The twin attacks sent crude prices soaring amid a tense standoff between Iran and the US.

The Japanese-owned Kokuka Courageous was carrying highly flammable methanol through the Gulf of Oman when it was rocked by explosions, causing a blaze that was quickly extinguished.

A tanker owned by Oslo-listed company Frontline was also targeted.

The two vessels were attacked around the time Japanese Prime Minister Shinzo Abe was meeting with Iranian leaders in Tehran.

The prince also accused “Iran and its proxies” over May 12 attacks on 4 tankers anchored in the Gulf of Oman off the United Arab Emirates port of Fujairah.

US President Donald Trump has said the twin attacks had Iran “written all over it”, rejecting Tehran’s vehement denial.

Saudi Arabia, a close US ally, is a bitter regional rival of Iran.

The US military on Friday, June 14, released grainy footage it said showed an Iranian patrol boat removing an “unexploded limpet mine” from one of the tankers.

Iran has repeatedly warned in the past that it could block the strategic Hormuz Strait in a relatively low-tech, high-impact countermeasure to any attack by the United States.

Doing so would disrupt oil tankers traveling out of the Gulf region to the Indian Ocean and global export routes.

The UAE’s Sheikh Abdullah, whose country is bitterly opposed to Iranian influence in the region, called for a de-escalation of tensions.

“We remain hopeful in attaining a broader framework for cooperation with Iran,” he said at a summit in Bulgaria.

The Japanese tanker’s Tokyo-based operator Kokuka confirmed Saturday, June 15, the stricken vessel was heading to port in the UAE.

“We still don’t know if the tanker goes to Khor Fakkan or Fujairah as they are very close,” said a spokesman, referring to two Emirati ports on the Gulf of Oman.

Maritime experts would then seek to transfer the highly flammable cargo to shore, according to an unnamed official quoted by Japanese state media.

“From a viewpoint of global energy security, it is necessary for the international community to jointly deal with the act,” said Japanese trade minister Hiroshige Seko at a G20 energy and environment meeting in Japan on Saturday.

The ship is “heading toward the Fujairah-Khor Fakkan area in the United Arab Emirates”, head of ports for Iran’s southern province of Hormozgan told the semi-official news agency ISNA.

The tanker “has left Iran’s territorial waters,” he said, adding that it was being towed and sprayed with water to cool the hull.

A spokeswoman for Frontline Management, the Norwegian company which owns the ship, said “all 23 crew members of the tanker departed Iran” and flew to Dubai on Saturday.

“All crew members are well and have been well looked after while in Iran,” she said.

Iranian Foreign Minister Mohammad Javad Zarif tweeted that the US had “immediately jumped to make allegations against Iran without a shred of factual or circumstantial evidence.”

The United States has also accused Iran over May 12 sabotage attacks on four tankers anchored in the Gulf of Oman off Fujairah.

“It’s very important to know the truth (and) that responsibilities are clarified,” he told reporters at UN headquarters in New York. – Rappler.com