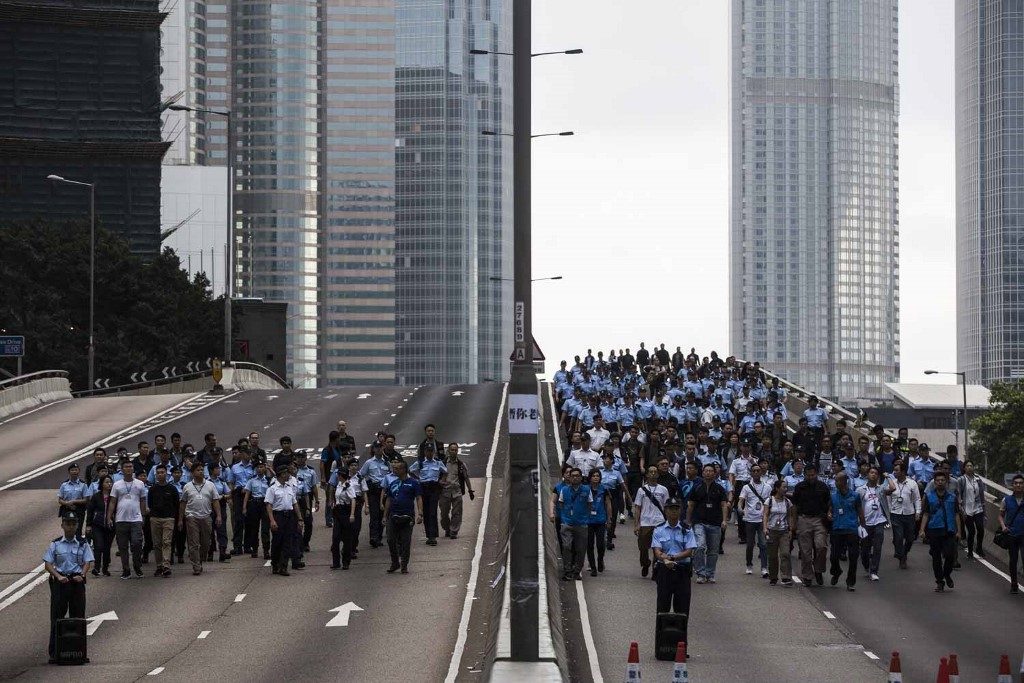 HONG KONG – Holdout anti-government protesters remained in control of a major arterial road in Hong Kong on Monday, June 17, a day after organizers said two million people flooded the streets in a historic rebuke of the city’s pro-Beijing leader.

Vast crowds marched for hours in tropical heat on Sunday, June 16, calling for the resignation of chief executive Carrie Lam, who has been forced to suspend a widely loathed bill that would have allowed extraditions to the Chinese mainland.

Throngs of largely black-clad protesters snaked their way for miles through the streets to the city’s parliament – with the organizers’ estimate for the crowd size doubling an already record-breaking demonstration the previous Sunday in the city of 7.3 million.

The estimate has not been independently verified but if confirmed it would be the largest demonstration in Hong Kong’s history.

Police, who historically give far lower estimates for political protests, said 338,000 people turned out at the demonstration’s “peak” Sunday.

By Monday morning the crowds had dramatically dropped to just a few hundred largely young protesters occupying a major highway outside the city’s parliament and some nearby streets.

Small lines of police, who had virtually disappeared the night before, were pleading with the protesters to go home but made no attempt to force them on.

Opposition to the extradition bill has united an unusually wide cross-section of Hong Kong in recent weeks, from influential legal and business bodies to religious leaders.

And while the spark for the last week of protests has been the extradition bill, the movement has since morphed into the latest expression of public rage against both the city’s leaders and Beijing.

Many Hong Kongers believe China’s leaders are stamping down on the financial hub’s unique freedoms and culture.

They point to the huge 2014 pro-democracy “Umbrella Movement” that failed to win any concessions, the imprisonment of protest leaders, the disqualification of popular lawmakers and the disappearance of Beijing-critical booksellers, as recent examples.

In recent years, the city’s pro-Beijing leaders have successfully resisted bowing to pressure from large street protests led by the city’s pro-democracy activists.

But the sheer size of the last week’s crowds, and unprecedented violent clashes on Wednesday, has forced Lam into a major climbdown.

On Saturday she indefinitely suspended the unpopular extradition bill and apologized a day later for the attempt causing “conflict and disputes”.

But the U-turn has done little to mollify protesters.

The Civil Human Rights Front, which is organising the rallies, has called on Lam to resign, shelve the bill permanently and apologise for police using tear gas and rubber bullets on Wednesday. They have also demanded all charges be dropped against anyone arrested.

The violent crowd control measures on Wednesday, used by police as protesters tried to storm the city’s parliament to stop the bill being debated, have proved enormously costly for Lam’s government.

Political allies – and even Beijing – distanced themselves from her as public anger mounted.

“I think she has lost any remaining credibility or legitimacy to rule in Hong Kong because of her own mishandling of this whole affair,” Charles Mok, a lawmaker, told RTHK Radio.

The massive rallies – which come 30 years after the Tiananmen crackdown – also create a huge headache for president Xi Jinping, the most authoritarian Chinese leader since Mao Zedong.

Under the 1997 handover deal signed with Britain, China agreed to allow Hong Kong to keep unique liberties such as freedom of speech and its hugely successful independent common law courts for 50 years.

But the huge crowds this week illustrate how many Hong Kong’s 7.3 million inhabitants believe China is already reneging on that deal and fear further sliding freedoms as the city hurtles towards that 2047 deadline.

Protest leaders have called for a strike on Monday and renewed demonstrations.

One of the city’s most prominent protest leaders is due to be released from prison later on Monday morning.

Wong, 22, was jailed in May for two months on a contempt charge after pleading guilty to obstructing the clearance of a major protest camp back in 2014.

It was not clear whether his early release was a gesture from the authorities or procedure.

A release on Monday would mean he will have served exactly half his sentence, a common policy in Hong Kong for prisoners who exhibit good behaviour.