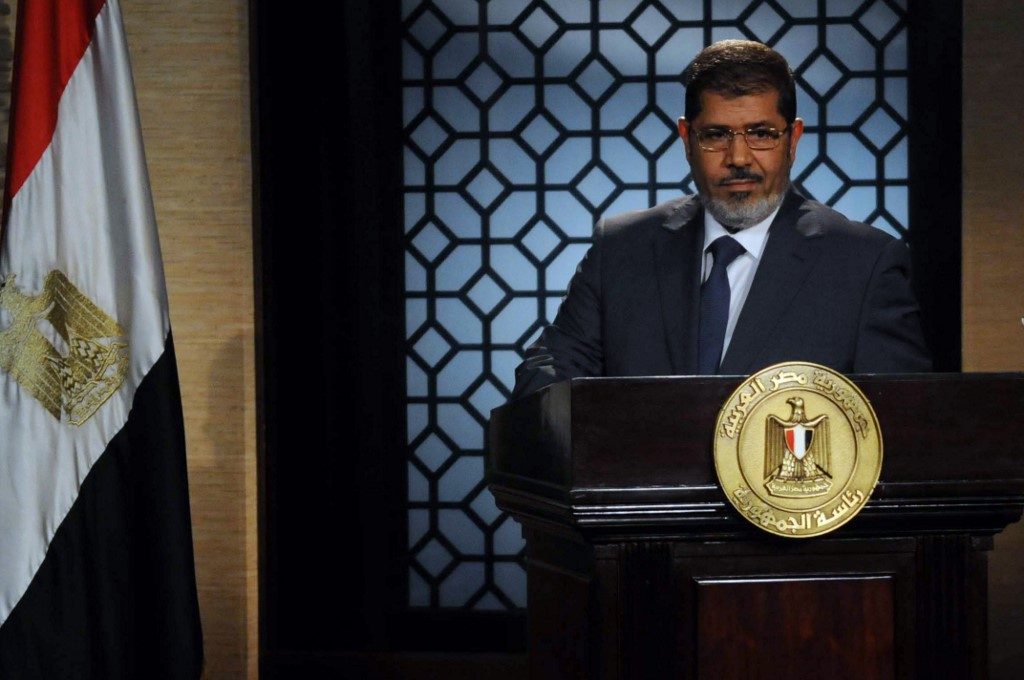 CAIRO, Egypt (UPDATED) – Egypt’s first democratically elected president Mohamed Morsi, an Islamist who was ousted after one year of divisive rule, died after falling ill during a court hearing on Monday, June 17, the attorney general said. He was 67.

Morsi, also the country’s first civilian president, had been “animated” during a hearing in the retrial of an espionage case in which he was accused of collaborating with adverse foreign powers and militant groups, judicial and security sources said.

“The court granted him his request to speak for 5 minutes… He fell to the ground in the cage…and was transported immediately to the hospital. A medical report found…no pulse or breathing,” said the attorney general’s office.

“He arrived at the hospital dead at 4:50 pm exactly and there were no new, visible injuries found on the body.”

One of Morsi’s legal defense team described the moment he received news of his death.

“We heard the banging on the glass cage from the rest of the other inmates and them screaming loudly that Morsi had died,” the lawyer, Osama El Helw, told AFP.

A judicial source said Morsi had fainted during a break in the trial hearing.

The court officials “had just finished the session for the espionage case and they informed the judge that he had fainted and needed to be transported to a hospital where he later died,” he told Agence France-Presse (AFP).

Abdelmoneim Abdelmaksoud, another of Morsi’s lawyers, was unable to say where his body was and when his funeral would be held.

“He (Morsi) wanted to be buried where he hailed from originally. However, this isn’t really up to the family but for the powers that be,” he told AFP.

Morsi last saw his family in September 2018 and a month later one of his sons, Abdallah, was arrested.

Abdelmaksoud was the last member of his defense team to see the former Islamist president, back in November 2017.

They “put him in solitary confinement…they withheld medication and gave him disgusting food… they did not grant him the most basic human rights,” it said in a statement.

In a strongly worded statement, Amnesty International on Monday called on Egyptian authorities to open a probe into Morsi’s death.

“The Egyptian authorities must immediately order an impartial, thorough and transparent investigation into the circumstances of his death, as well as his detention conditions and his ability to access medical care,” the rights group said.

Turkish President Recep Tayyip Erdogan, a strong ally of Morsi during his brief tenure as Egypt’s leader, paid tribute to the “martyr.”

Internationally he may have received some support but in his homeland Morsi’s chequered legacy is still condemned.

Following the news of his death, Egyptian television channels went into feverish overdrive labelling the Brotherhood a “terrorist group” and playing a looping tagline of “The Brothers are liars.”

Morsi spent just one turbulent year in office after the 2011 uprising. He was toppled in a military overthrow after millions took to the streets demanding his resignation.

The Islamist leader has been in prison since his ouster on trial for several cases including for spying for Iran, Qatar and militant groups such as Hamas in the Gaza Strip.

He was sentenced to death in May 2015 for his role in jailbreaks during the uprising that ousted his predecessor, longtime autocrat Hosni Mubarak.

A group of British parliamentarians in March 2018 warned in a report that his detention conditions had not met international standards and could lead to his “premature death.” Other Brotherhood leaders have also died in custody.

The years following Morsi’s overthrow have seen a surge in bombings and shootings targeting security forces, particularly in the restive northern Sinai Peninsula, a stronghold of the Islamic State group.

His death comes only days before Egypt is set to host the Africa Cup of Nations football tournament from Friday, June 21.

Authorities have been on high alert for any security breaches noting in an interior ministry Facebook post published Wednesday, June 12, that thousands of forces would be deployed to secure venues. – Rappler.com