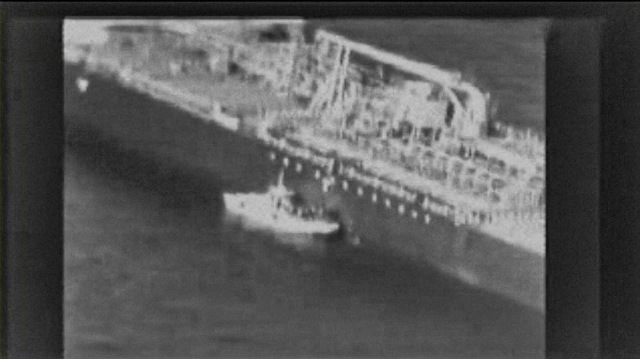 Washington has blamed Iran for last week’s attacks, releasing images and a grainy video it alleges shows Iranians on a patrol boat removing an unexploded limpet mine attached to one of the tankers.

“Accusations levelled against Iran’s armed forces and the published film with regards to the incident (that) happened to the vessels…are unsubstantiated and we categorically reject these accusations,” IRNA quoted Defense Minister Brigadier-General Amir Hatami as saying.

“The armed forces and the port organization were among the first to approach the tankers after the incident for relief operations and they rescued 23 people in the first tanker,” he added.

Hatami did not explicitly specify which of the two ships he was referring to, but Iran’s English-language Press TV at the time broadcast footage of 23 sailors rescued from the Front Altair, a tanker owned by a Norwegian listed company.

Hatami added that the Iranian forces then headed to the second tanker, but the crew said another vessel had already rescued them.

“This means Americans had arrived sooner to the scene where they claim the video was recorded,” Hatami said, with apparent reference to the Japanese-owned Kokuka Courageous.

According to a US navy spokesman, the 21 sailors from the Kokuka Courageous abandoned ship after “discovering a probable unexploded limpet mine on their hull following an initial explosion,” before they were picked up by a Dutch tugboat.

The sailors were transferred to the USS Bainbridge and US Central Command later released a video it said showed an Iranian patrol boat removing the mine from the hull of the Kokuka Courageous, but it has not provided an explanation as to why the patrol boat allegedly did so while the US military was observing.

Iran’s Foreign Ministry had already dismissed the US allegations that it was behind the attacks as “baseless” and slammed Saudi Arabia and Britain – where Foreign Secretary Jeremy Hunt has alleged Iran was “almost certainly” responsible for the attacks – for following the US line.

Iranian officials have hinted that Washington could be behind the “suspicious” attacks that coincided with a visit by Japan’s Prime Minister Shinzo Abe to Tehran, which he undertook in a bid to defuse Iran-US and Middle East tensions.

“Our close ties with Asia, Japan and China have brought some to attack the two tankers on the same day as Japan’s Prime Minister is our guest in Tehran,” Iranian President Hassan Rouhani said in a cabinet meeting on Wednesday.

Tensions between Tehran and Washington have grown since the US last year unilaterally quit the multilateral 2015 nuclear deal and reimposed sanctions on Iran.

The US has bolstered its military presence in the Middle East and blacklisted Iran’s Revolutionary Guards as a terrorist organization.

But Tehran’s top security official believes there is no reason to worry about a conflict breaking out.

“There will be no war (between Iran and the US) since there is no reason for a war,” said rear admiral Ali Shamkhani, secretary of Iran’s Supreme National Security Council, quoted by IRNA on Wednesday. – Rappler.com