Jun 23, 2019 1:37 PM PHT
Agence France-Presse
Facebook Twitter Copy URL
Copied
(UPDATED) 'At around 4am there was a loud 'bang'... my floor trembled, suddenly the building went down. I was crushed by debris from my waist down,' says survivor Phat Sophal 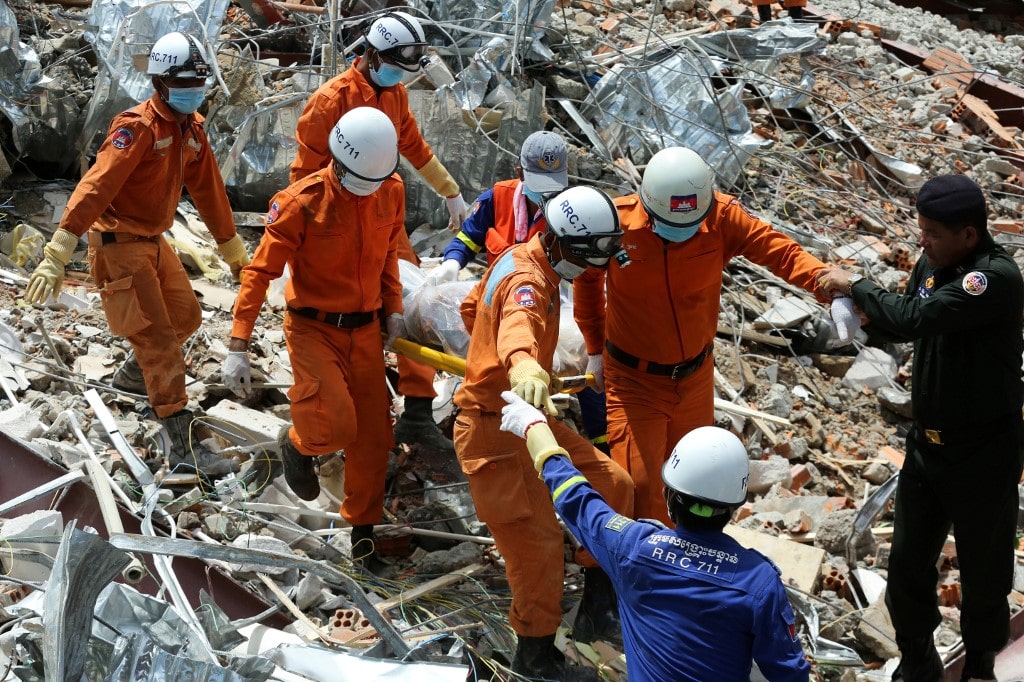 PHNOM PENH, Cambodia (UPDATED) – Victims of the Cambodia building collapse were buried alive as they slept, a survivor told Agence France-Presse on Sunday, June 23, as the death toll at the Chinese-owned site rose to 18 and increasingly desperate rescuers picked through the compacted rubble for any further signs of life.

There are fears many more workers may be buried as rescuers had scoured barely half of the debris of twisted metal, glass and large concrete slabs after the 7-storey building collapsed on Saturday, June 22, in the beach resort of Sihanoukville.

“I’m so lucky to be alive,” survivor Phat Sophal, 37, told AFP over the telephone.

In an ordeal that began before dawn while workers slept, Phat Sophal said he spent around 6 hours trapped in the debris, before being pulled out by rescuers on Saturday morning.

“At around 4am there was a loud ‘bang’… my floor trembled, suddenly the building went down. I was crushed by debris from my waist down,” he said.

“My nephew and brother-in-law were also sleeping near me. Everyone was screaming and crying for help. A bit later I stopped hearing them.

“I don’t think they have survived.”

Around 70 workers were sleeping on the second, 3rd and 4th floors of the 7-storey building, he said, adding Chinese electricians were resting on the upper floors.

The former fishing village of Sihanoukville has seen a Chinese construction boom buoyed by tourists to its dozens of casinos in recent years, with questions raised on the speed of development in a nation notorious for lax safety standards.

Three Chinese nationals and a Cambodian landowner have been held for questioning over the building collapse, which Cambodian Prime Minister Hun Sen blamed on “carelessness” by the construction company.

Local authorities on Sunday raised the death toll to 18 – including at least 3 women – with 24 injured.

At least 1,000 rescue workers, soldiers, police, medics and Chinese construction experts have been deployed to the site.

Some wore hard hats and oxygen tanks and used pneumatic drills to chip through concrete blocks, while the relatives of the injured waited at nearby hospitals for news.

One person was pulled alive from the rubble late Saturday – the last survivor to be extracted as of Sunday afternoon.

A provincial official said “teams have searched about 40 percent of the debris”, prompting concerns the toll will rise.

“We fear more bodies are trapped in the debris because the search has not reached the bottom of the building yet,” the official told AFP, requesting anonymity.

It is not clear how many people were at the site at the time of the collapse.

There are an estimated 200,000 construction workers in Cambodia – about 11 percent of the informal work sector – most who are unskilled, paid day wages and are not protected by union rules, according to the International Labor Organization (ILO).

Cambodia has not kept pace with the construction boom “to ensure safety and health of the sector’s workforce,” the ILO has said.

The southwestern town of Sihanoukville is awash with Chinese cash that has sparked a building frenzy to cater to mainland tourists flooding the town’s city’s casinos, beaches and glitzy hotels.

Beijing is pouring investment into Cambodia as part of its behemoth Belt and Road initiative, a sweeping trillion-dollar infrastructure program across Asia, Africa and Europe.

Around $1 billion was invested in the Preah Sihanouk province between 2016 and 2018 alone, and there are around 50 Chinese-owned casinos and dozens of hotel complexes under construction in Sihanoukville.

The owner of the building, the head of the construction firm and the contractor – all Chinese nationals – have been detained by Cambodian police. – Rappler.com