Jun 23, 2019 2:34 PM PHT
Agence France-Presse
Facebook Twitter Copy URL
Copied
'We are putting major additional Sanctions on Iran on Monday, (June 24). I look forward to the day that sanctions come off Iran, and they become a productive and prosperous nation again,' tweets US President Donald Trump 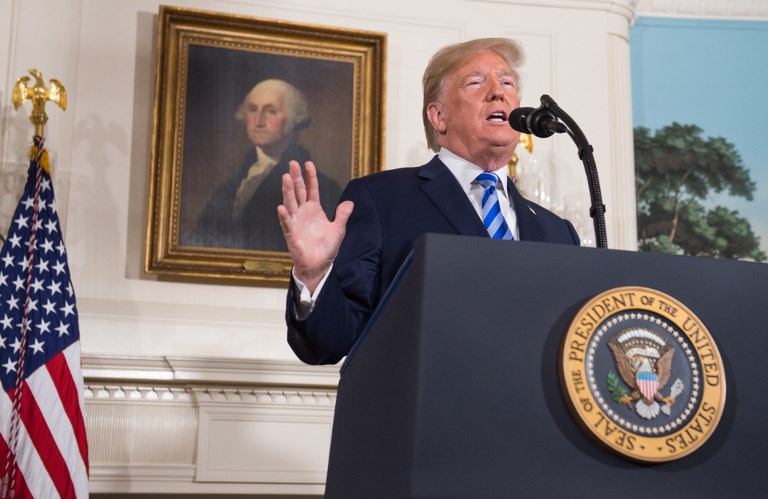 WASHINGTON DC, USA – US President Donald Trump on Saturday, June 22, pledged to hit Iran with “major” new sanctions as Tehran warned Washington that any attack would see its interests across the Middle East go up in flames.

The war of words heated up after Trump had pulled back from military action against Iran in response to its downing of a US reconnaissance drone.

That incident, which came after a series of attacks on tankers in the congested shipping lanes out of the Gulf that the US has blamed on Iran, exacerbated already tense relations between the two countries.

Iran has denied responsibility for those attacks.

Trump, who spent Saturday huddling with his advisors at Camp David, initially told reporters that he was keen to be Iran’s “best friend” – if the country agreed to renounce nuclear weapons.

Iran has denied seeking a nuclear weapon and says its program is for civilian purposes.

A multinational accord reached by Tehran and world powers in 2015 sought to curb Iran’s nuclear ambitions in exchange for sanctions relief.

But Trump left that agreement more than a year ago and has imposed a robust slate of punitive economic sanctions designed to choke off Iranian oil sales and cripple its economy – one he now plans to expand.

“We are putting major additional Sanctions on Iran on Monday (June 24),” tweeted Trump, who has also deployed additional troops to the Middle East.

“I look forward to the day that Sanctions come off Iran, and they become a productive and prosperous nation again – The sooner the better!”

Added Secretary of State Mike Pompeo: “When the Iranian regime decides to forgo violence and meet our diplomacy with diplomacy, it knows how to reach us. Until then, our diplomatic isolation and economic pressure campaign against the regime will intensify.”

But lest anyone think he was entirely ruling out military action, Trump tweeted Saturday evening that “I never called the strike against Iran ‘BACK,’ as people are incorrectly reporting, I just stopped it from going forward at this time!”

A top Iranian military official warned Washington against any strikes.

“If the enemy – especially America and its allies in the region – make the military mistake of shooting the powder keg on which America’s interests lie, the region will be set on fire,” Shekarchi warned.

Following his comments, Iran said it had executed a man, a contractor for the defense ministry’s aerospace organization, who had been convicted of spying for the United States.

After the downing Thursday, June 18, of the Global Hawk surveillance aircraft, Trump said the United States had been “cocked & loaded” to strike Iran.

But at the last minute, he said he pulled back as the response would not have been “proportionate.”

The US president subsequently said he did not want war with Iran, but if it came to pass, there would be “obliteration like you’ve never seen before,” according to excerpts of an interview with NBC conducted on Friday.

Tehran insists that the drone violated its airspace – something Washington denies – but a commander of the elite Revolutionary Guards, Brigadier General Amir Ali Hajizadeh, told state news agency IRNA that the violation could have been an accident.

“Nonetheless, this was an act of trampling international aviation laws by a spy aircraft,” Hajizadeh added.

“There can be no doubt about where the vessel was when it was brought down,” he wrote on Twitter.

After the drone was downed, Trump secretly authorized US Cyber Command to carry out a retaliatory cyber attack on Iran, The Washington Post reported Saturday.

It crippled computers used to control rocket and missile launches, according to the Post, while Yahoo News said a spying group responsible for tracking ships in the Gulf was targeted.

Iran’s foreign ministry said it had summoned the charge d’affaires of the United Arab Emirates, from where the US drone launched, to protest its decision to “put its installations at the disposal of foreign forces for aggression.”

The US Federal Aviation Administration has barred American civilian aircraft from the area “until further notice,” and several major non-US airlines were altering flight paths to avoid the sensitive Strait of Hormuz. – Rappler.com