Jun 24, 2019 9:36 AM PHT
Agence France-Presse
Facebook Twitter Copy URL
Copied
This year, many Sao Paulo LGBT pride parade participants say they are turning out because they feel their liberties are increasingly under threat 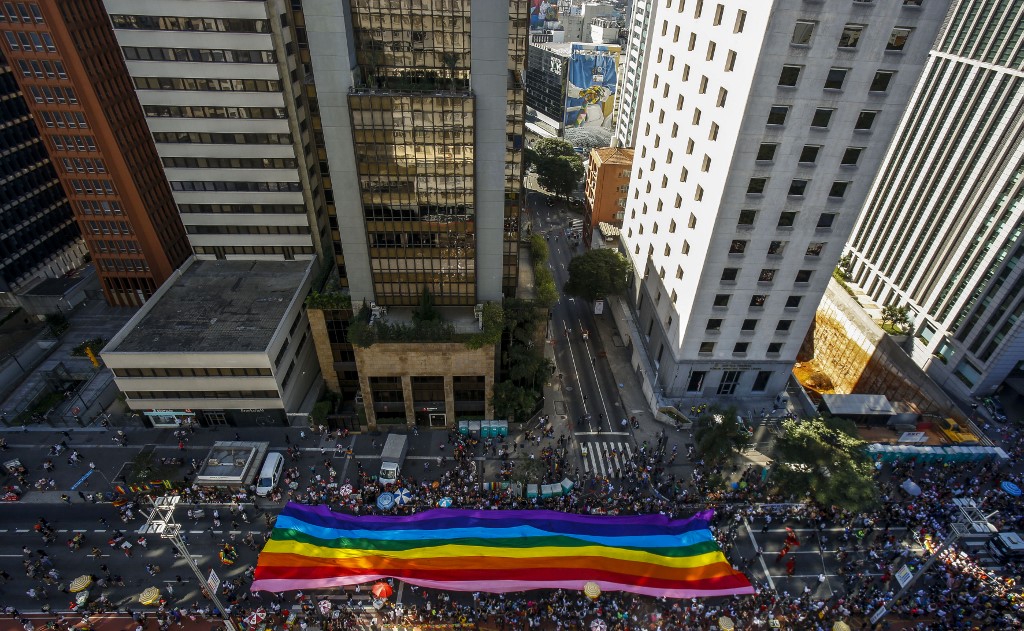 Tens of thousands of people took part in the annual march through the heart of Brazil’s economic capital, traditionally an exuberant celebration of camp, color and fantasy.

But this year, many participants said they were turning out because they feel their liberties are increasingly under threat.

“I came to fight against homophobia and disrespect,” said 31-year-old Monique Barber, who said she faced verbal attacks at the start of the march.

“We have a homophobic politician and we are seeing things go backwards. Just imagine being attacked at the LGBT march itself,” she said.

Bolsonaro, a right-wing ex-army officer who was elected president last year, has a long history of homophobic, racist and chauvinist remarks.

Since taking office January 1, he has doubled down on that anti-gay posture, calling a recent Supreme Court decision criminalizing homophobia “an error.”

Bolsonaro, who is Catholic, has strong support from Brazil’s growing Evangelical community.

This week he became the first Brazilian president to join the annual “March for Jesus,” also held in Sao Paulo, an event that attracts Evangelical faithful from around the country.

Marina Fernandes, 19, said she was taking part in the march for the first time in support of LGBT rights, although she identifies as heterosexual.

“I came because I feel empathy and because I believe in respect for others. You don’t have to be homosexual for that,” she said.

Nineteen sound vehicles ran the length of the parade route, laden with music acts that include Spice Girl Mel C, as well as the Brazilian performers Karol Conka, Iza and Luisa Sonza.

This year’s theme is “50 Years Since Stonewall,” in tribute to the protests at a New York gay bar in 1969 that helped launch the modern LGBT rights movement.

Pedestrian crossing lights on Paulista Avenue were retouched for the event; instead of the traditional red and green, they flash same-sex couples.

A medical station displayed enormous rainbow decorations, and some businesses joined in, draping storefronts with the movement’s symbolic colors.

“Prejudice has a cure, through education,” read a sign borne alongside the parade’s lead sound truck.

“I define myself as powerful,” said a smiling Jonathan Alves, 27, ducking discussion of his sexual preference.

Wearing black pants and bra, his lips daubed with pink lipstick, Alves said he had overcome his fears to take part in the march for the first time.

“You have to come because it helps you accept yourself. Some people hide their entire lives and it’s important to accept yourself, and even more so to show that we are no different,” he said.

“We have a homophobic government that promotes and facilitates the carrying of weapons. A president that does not believe that homophobia is a crime, and who empowers intolerant people,” he said.

Ferreira, who lives in the Sao Paulo area, said that the LGBT community outside of the big cities is extremely vulnerable.

“Just holding hands with your partner could cost you your life,” said Ferreira, who was shirtless and had a rainbow flag tied around his neck. – Rappler.com