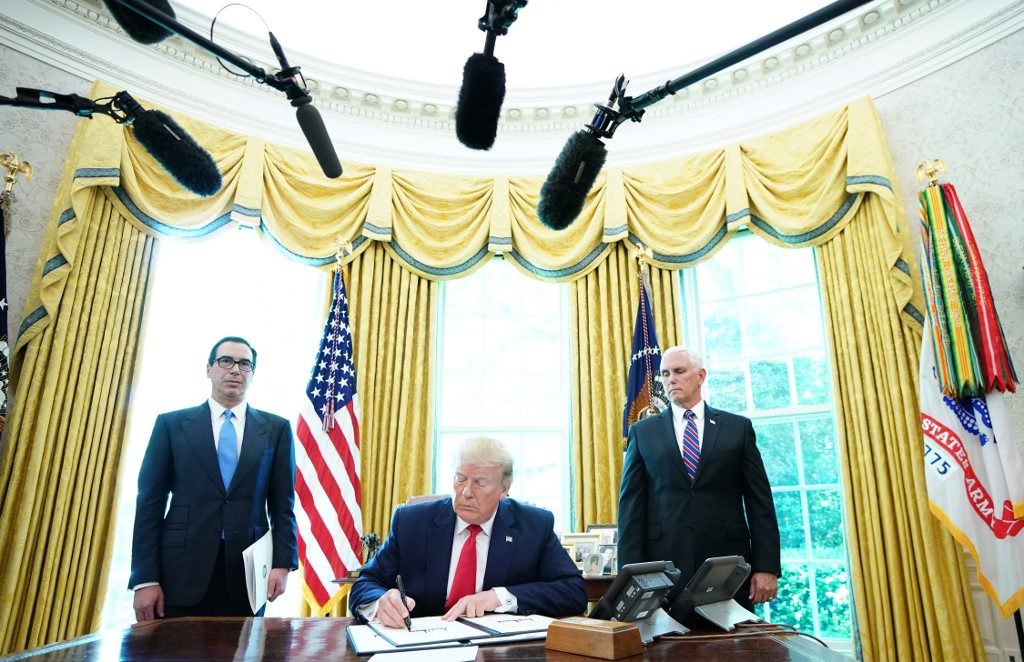 TEHRAN, Iran (UPDATED) – Iran vehemently responded Tuesday, June 25, to new US sanctions against its leaders, saying they showed Washington was “lying” about an offer of talks and marked the end of diplomacy with the Trump administration, amid an escalating regional standoff.

“At the same time as you call for negotiations you seek to sanction the foreign minister? It’s obvious that you’re lying,” Rouhani said in a meeting with ministers, broadcast live on TV.

His comments came as US National Security Advisor John Bolton, on a visit to Iran’s archenemy Israel, said Washington had “held the door open to real negotiations” but that “in response, Iran’s silence has been deafening.”

Iran and the US broke off diplomatic relations in 1980 over the hostage crisis at the US embassy in Tehran following Iran’s Islamic revolution.

Tensions between them have been escalating since US President Donald Trump unilaterally withdrew last year from a landmark 2015 nuclear deal with Iran and reimposed sanctions on the Islamic republic.

Trump has since moved to choke Iran’s economy, blacklisted Iran’s Revolutionary Guards as a “terrorist organization” and nearly launched a military strike in retaliation to Iran downing a US spy drone.

Zarif said the drone had violated Iranian airspace, a claim the US denies. But Russia, a key ally of Tehran, on Tuesday backed Zarif’s version of events.

Trump has said he is ready to negotiate with Iran “with no preconditions” and that Iran could have a “phenomenal future.”

“We do not ask for conflict,” he said, adding that depending on Iran’s response, sanctions could end tomorrow or “years from now.”

Rouhani also mocked the logic of blacklisting the supreme leader, who has few assets and no plans to visit the US.

“To sanction (the supreme leader) for what? Not to travel to America? That’s cute,” he said.

Rouhani noted that there had been chances for talks between the two sides.

Zarif met former US secretary of state Rex Tillerson several times before Washington unilaterally withdrew from the nuclear deal in May 2018 and reimposed sanctions on Iran.

“You do not seek to negotiate. If you did, we could have,” Rouhani said.

Zarif, a political moderate, was a key architect of the deal under which Iran agreed to curb its nuclear program in exchange for sanctions relief.

But both he and Rouhani have accused Washington of waging an “economic war” on Iran since pulling out of the accord.

Tehran has threatened to scale down some of its commitments under the deal unless the remaining international parties – the Britain, China, France, Russia and Germany – help it circumvent US sanctions, particularly through vital oil exports.

But US Secretary of State Mike Pompeo said Monday he was working to build what he called a “global coalition” against the Islamic republic.

Amid a flurry of diplomatic activity, the UN Security Council issued a unanimous call for dialogue to address the standoff between the United States and Iran.

China on Tuesday urged “calm and restraint” as tensions grew.

“We believe that blindly applying maximum pressure will not help solve the problem,” said Chinese foreign ministry spokesman Geng Shuang at a press briefing in Beijing.

“Facts have proved that these measures have had the opposite effect and aggravated regional unrest,” he added.

French President Emmanuel Macron said he would use a meeting with Trump at the G20 summit in Japan to urge “a constructive solution with the aim of ensuring collective regional security.” – Rappler.com