Jun 26, 2019 8:03 PM PHT
Agence France-Presse
Facebook Twitter Copy URL
Copied
'Iran has no interest to increase tension in the region and it never seeks war with any country, including [the] US,' state news agency IRNA quotes President Hassan Rouhani as saying 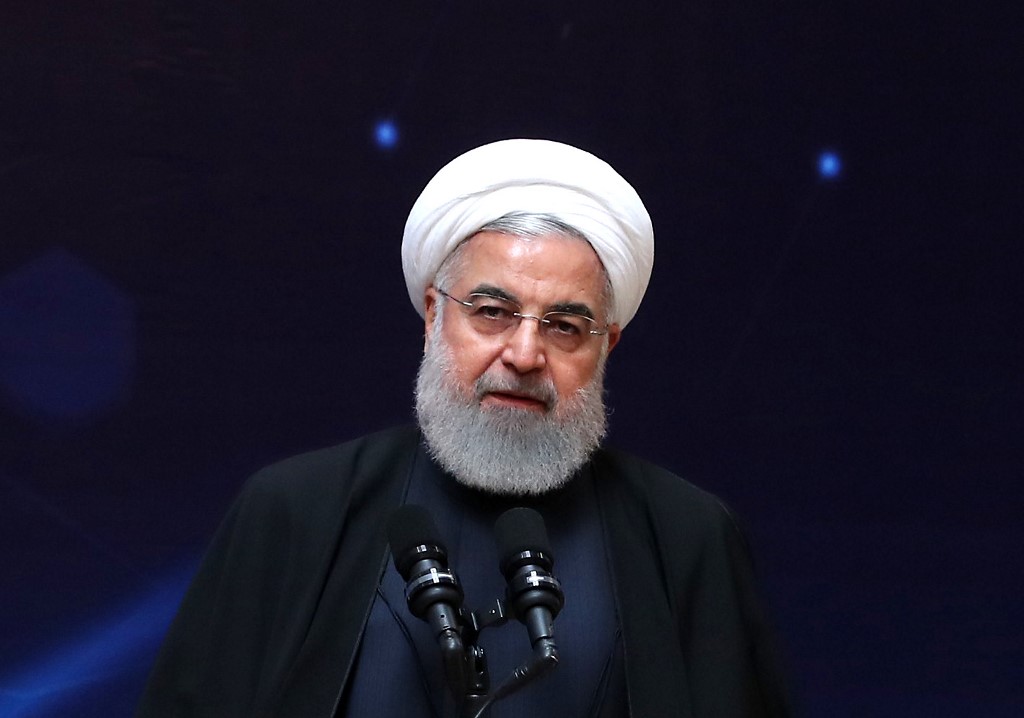 TEHRAN, Iran – Iran “never seeks war” with the United States, President Hassan Rouhani said as he sought to rein in soaring tensions between the two archfoes.

“Iran has no interest to increase tension in the region and it never seeks war with any country, including [the] US,” the president said, quoted by state news agency IRNA on Wednesday, June 26.

Rouhani was speaking by phone to his French counterpart Emmanuel Macron, as Tehran and Washington engaged in an escalating war of words following Iran’s shooting down of a US drone last week.

“We have always been committed to regional peace and stability and will make efforts in this respect,” the Iranian president told Macron.

US President Donald Trump said he pulled back from retaliatory strikes on Iran at the last minute, rejecting Tehran’s claim that the aircraft was in its airspace.

General Hossein Salami, commander of Iran’s Revolutionary Guards, mocked the latest sanctions as an “irrational” reaction to the loss of the sophisticated drone.

The new measures are the latest against Tehran since Trump pulled out of a landmark nuclear accord between Iran and world powers.

Khamenei said Wednesday that the Islamic republic remains unbowed by pressure exerted by the United States and its “insults.”

“The Iranian nation seeks dignity, independence and progress; that’s why pressures by cruel enemies do not affect Iranians,” Khamenei said in a speech to a crowd in Tehran.

“The graceful Iranian nation has been accused and insulted by the world’s most vicious regime, the US,” he said, quoted by his office.

“The Iranian nation won’t give up over such insults,” said Khamenei.

Rouhani blamed the United States for regional tensions and said if Washington had stuck to the deal “we would have witnessed positive developments in the region.”

Iran announced in May it would suspend two of its pledges under the 2015 deal, giving the agreement’s remaining supporters two months to help it circumvent US sanctions.

Tehran’s compliance had been based on European promises to support Iran’s economy – which have failed to bear fruit – Rouhani told Macron.

Iran previously announced it would stop observing restrictions on its stocks of enriched uranium and heavy water agreed under the deal.

The Trump administration says it is open to talks with Tehran, an offer flatly rejected by Rouhani after the US said it would also sanction his top diplomat.

“At the same time as you call for negotiations you seek to sanction the foreign minister? It’s obvious that you’re lying,” Rouhani said Tuesday, raising fears of conflict despite both sides saying they are not looking for war.

Washington’s national security advisor, John Bolton, on Tuesday accused Iran of being behind “a long series of unprovoked and unjustifiable attacks.”

The US has blamed Tehran for attacks earlier this month on tankers close to the strategic Strait of Hormuz, through which most Gulf oil exports pass.

Iran has vehemently denied involvement, despite it previously threatening to close the vital waterway.

Trump said Tuesday he is not seeking conflict, while warning Iran against hitting US interests.

“Any attack by Iran on anything American will be met with great and overwhelming force. In some areas, overwhelming will mean obliteration,” he tweeted.

Iran and the US broke off diplomatic relations in 1980 over the hostage crisis at the US embassy in Tehran following Iran’s Islamic revolution.

Trump’s comments came after a flurry of diplomatic activity, which saw the UN Security Council issue a unanimous call Monday for dialogue to address the bilateral standoff.

With no sign of calm on Tuesday, China urged “calm and restraint.” – Rappler.com