Jun 27, 2019 8:50 PM PHT
Agence France-Presse
Facebook Twitter Copy URL
Copied
(UPDATED) The violence revives fears for the stability of the North African state, which is seen as a rare democratic success story of the Arab Spring uprisings but has been hit by repeated Islamist attacks 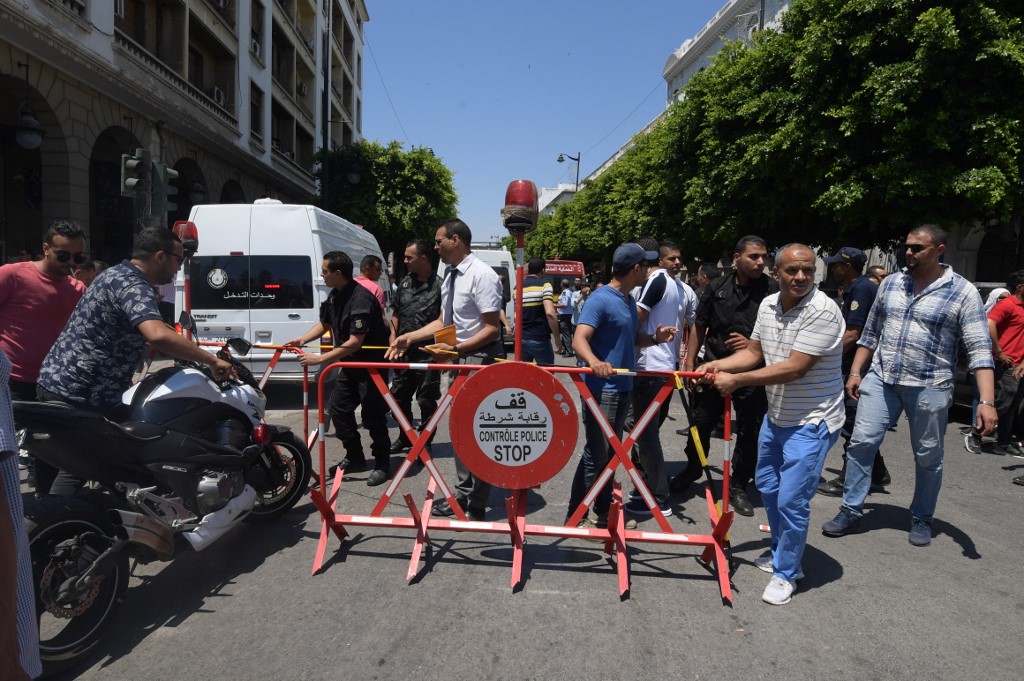 TUNIS, Tunisia (UPDATED) – Double suicide attacks shook Tunisia’s capital Thursday, June 27, even as the country was plunged into uncertainty with the hospitalization of President Beji Caid Essebsi who was said to be in “critical condition.”

The violence revived fears for the stability of the North African state, which is seen as a rare democratic success story of the Arab Spring uprisings but has been hit by repeated Islamist attacks.

Thursday’s blasts – one on a central avenue and another against a security base – killed a police officer and wounded at least 8 people including several civilians, the interior ministry said.

An Agence France-Presse (AFP) correspondent saw body parts strewn in the road around a police car after the first attack, which took place on Habib Bourguiba, a central avenue near the old city.

The interior ministry said one policeman died from his wounds after that blast, while another policeman and 3 civilians were wounded.

Half an hour later, the second attack targeted a base of the national guard, judicial police and the anti-terror branch in the capital.

“An individual blew himself up outside the back door” of the base, wounding 4 security personnel, Zaag said, adding that both bombers were men.

Just hours after news of the attacks broke, the presidency announced that Essebsi “was taken seriously ill and transferred to the military hospital in Tunis.”

Key adviser Firas Guefrech described the 92-year-old leader as in “critical condition” and in a later tweet said that Essebsi was “stable,” urging supporters to pray for his recovery.

There was no immediate claim of responsibility for the attacks.

Some passersby fainted while others fled in panic as shops and offices were closed by the police.

Some people crowded around the scene of the attack, expressing anger at the authorities.

“It is a cowardly terrorist operation…[to] destabilize Tunisians, the economy and democratic transition,” Prime Minister Youssef Chahed told reporters, noting that it happened as the tourist season was in full swing.

“These (terrorist) groups don’t belong in Tunisia and our war against them is…a question of life or death,” Chahed added.

The twin attacks also came ahead of presidential and legislative elections, scheduled for October and November.

In April Essebsi said he did not plan to stand for re-election in order to make way for someone younger.

The veteran politician served as an adviser to Habib Bourguiba, the father of Tunisia’s independence from France, holding a number of key jobs under him and later under Ben Ali.

Tunisia, the cradle of the Arab Spring uprisings, has been hit by repeated Islamist attacks since the 2011 overthrow of Ben Ali.

On October 29, 2018 an unemployed graduate blew herself up near police cars on Habib Bourguiba avenue, killing herself and wounding 26 people, mostly police officers, according to the interior ministry.

The Tunisian authorities said she had sworn allegiance to ISIS.

That attack was the first to rock the Tunisian capital for over 3 and a half years.

In March 2015, jihadist gunmen killed 21 tourists and a policeman at the National Bardo Museum in Tunis.

In June that year, 30 Britons were among 38 foreign holidaymakers killed in a gun and grenade attack on a beach resort near the Tunisian city of Sousse.

And in November 2015, a suicide bombing against a bus carrying presidential guards killed 12, in an attack claimed by ISIS. – Rappler.com