Jun 28, 2019 8:09 AM PHT
Agence France-Presse
Facebook Twitter Copy URL
Copied
Held only once every 10 years, the US census is instrumental in apportioning some $675 billion in federal funding to states and cities 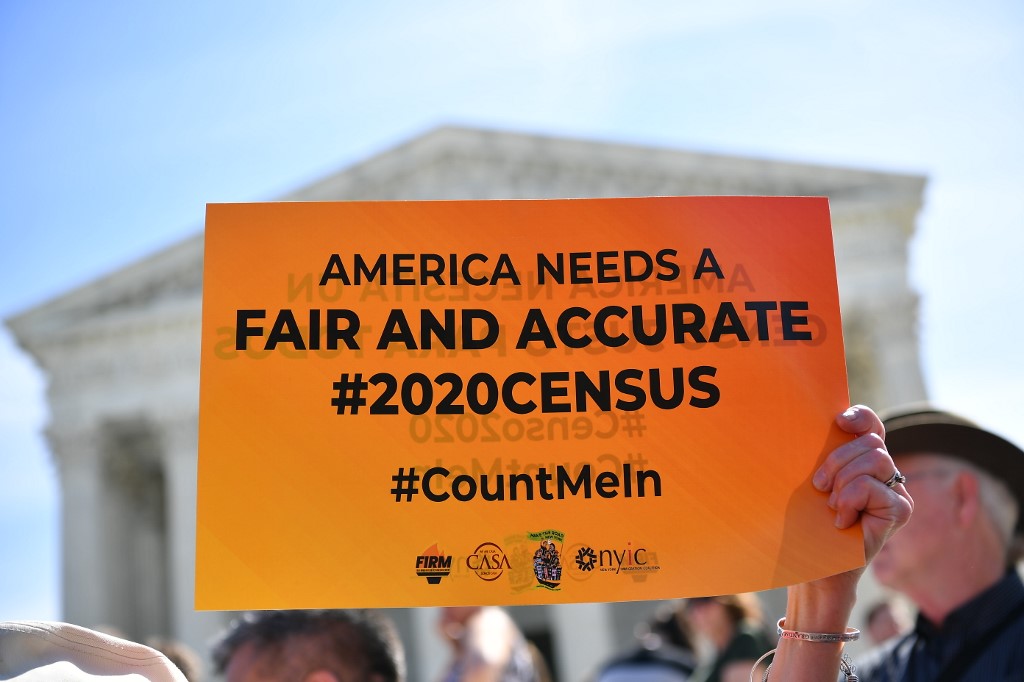 WASHINGTON, USA – President Donald Trump on Thursday, June 27, called for delaying the once-in-a-decade US census after the Supreme Court blocked his bid to add a question on citizenship – a measure critics say would result in undercounting immigrants.

Chief Justice John Roberts tipped the balance in a 5-4 vote by siding with the court’s liberal minority, boosting those trying to stop the Trump administration from adding the question to the 2020 census.

The decision said that the government’s arguments were “contrived.” However, the court potentially left the door open for a new appeal – and Trump said he’d try.

Not having the citizenship question is “totally ridiculous,” argued Trump, who is in Japan for the G20 summit.

He tweeted that government lawyers would now push to have the 2020 census delayed – “no matter how long” – in order to give the Supreme Court “additional information” and get a different decision.

In a separate, but related decision, the top court’s conservative majority refused to rule against electoral redistricting practices, known as gerrymandering, that tend to entrench the party in power.

Held only once every 10 years, the census is instrumental in apportioning some $675 billion in federal funding to states and cities, and also determines the number of seats allocated to each state in the House of Representatives.

Despite Trump’s frequent claim that the census is “meaningless” without asking if respondents are US citizens, that question has not appeared on the survey since 1950.

Critics, backed by the Census Bureau’s experts, said a citizenship question would drive many immigrants to avoid answering out of fear of being caught up in Trump’s hardline crackdown on illegal immigration – rendering them invisible.

This was the intention all along, said Joe Biden, the frontrunner in the contest to become the Democratic opponent to Trump in 2020 presidential elections.

“Make no mistake, the Trump Administration added a citizenship question to the Census to deliberately cut out the voices of immigrants and communities of color. It’s wrong and goes against our core values as a nation,” Biden tweeted.

Another candidate, Cory Booker, said that adding a citizenship question to the 2020 census “was a racist attempt to silence immigrant communities.”

The Census Bureau’s experts said that 1.6 to 6.5 million immigrants, notably Hispanics, would avoid the census or lie to census takers if faced with the citizenship question.

Opposition to the measure was led by some 20 states including Democratic-led California and New York, as well as major cities like Chicago and San Francisco, which filed legal actions against inclusion of the question.

The American Civil Liberties Union hailed the Supreme Court’s decision as “a victory for immigrants and communities of color across America.”

In the second case decided Thursday, the court’s conservative majority turned down challenges to electoral maps drawn up by two states.

A North Carolina map had been criticized as too favorable to Republicans and a Maryland map as benefiting Democrats.

In another 5-4 decision, the justices ruled that the courts had no role to play under the constitution in what the framers understood to be a political matter.

“We conclude that partisan gerrymandering claims present political questions beyond the reach of the federal courts,” Roberts wrote in the majority opinion.

In the United States, electoral maps are redrawn in each state every 10 years when a new census is taken. The party in power often profits by concentrating opposition voters in certain districts in order to diminish their influence elsewhere.

The practice is known as “gerrymandering,” a word that compounds the name of an 18th century governor, Elbridge Gerry, with salamander. Gerry had devised a district in his state so torturously that it took the shape of the lizard-like amphibian.

Former California governor Arnold Schwarzenegger called on the court to “terminate gerrymandering,” telling the protesters that the villain was not parties but politicians who “keep drawing the district lines to keep their jobs rather than representing the people.” – Rappler.com