Trans indigenous women eke out a tough living in Colombia 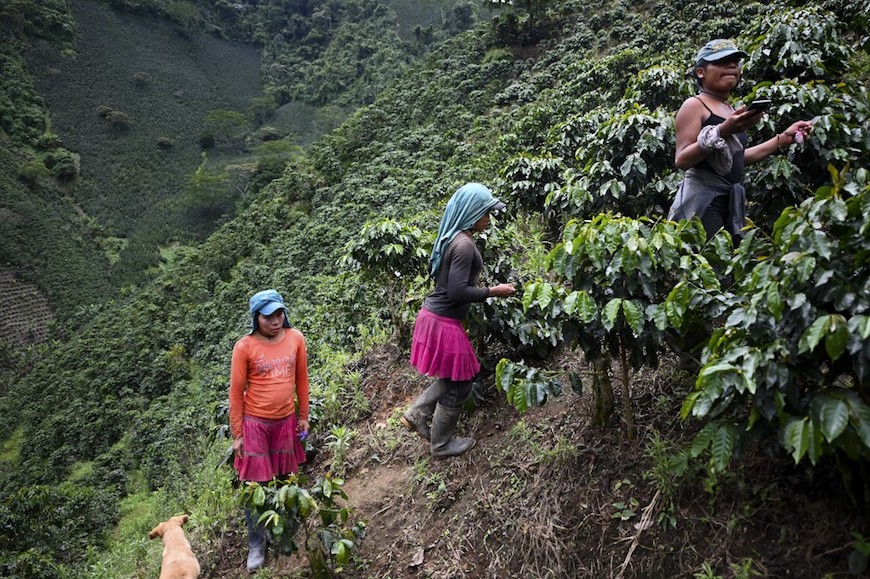 SANTUARIO, Colombia – When Erika Aisama decided to live as a transgender woman in an indigenous community in Colombia, the punishment was brutal: her father shaved her head and she was locked up in the stocks, medieval-style.

At age 13, she decided to flee the reservation of her Embera Chami tribe in western Colombia and go pick coffee beans for a living.

“I was dying. That is what I thought. But I do not want to die. So I am going to fly,” said Aisama, now 18 and one of about 50 indigenous trans women living and working in the coffee-growing town of Santuario.

When there are beans to harvest, Aisama can just about make ends meet – earning just a few dollars a day, toiling from Monday to Saturday.

It is only during her rather short weekend that Aisama and her colleagues get to really feel like women, leaving the coffee plantations and strolling through the streets of Santuario, a conservative town of some 15,000 people.

Colombia’s constitution recognizes the rights of LGBTQ people, but indigenous communities have been slower to accept them.

Within the Embera Chami group, people who are assigned male at birth and later identify as women are seen as indulging a whim, said community leader Ruben Dario Guipa.

Indigenous people view themselves as never changing, he added, so living as a transgender man or woman “is really serious,” he added.

Dario Guipa said he does not understand why tribe members would seek to “change the way they look.”

For indigenous people in Colombia – who make up 3.4% of the population – living life as a transgender man or woman can be painful and violent.

Just ask Aisama about being locked up – both wrists trapped in a wooden frame reminiscent of something from the 17th century – for public humiliation.

Veronica Tascon, a colleague of Aisama who is also a transgender woman, said they can suffer rejection from their relatives, and sometimes even be banished by community leaders – if they don’t run first.

This is not limited to indigenous transgender women, however.

Violence against transgender people in general is under-reported in Colombia, because of reluctance to call the police or confusion in identifying a victim’s gender, says an NGO called Colombia Diversa.

At least 29 transgender women were murdered in Colombia last year, the group says.

“I advise the trans girls here not to go home, and they do not go home,” Tascon said after a day of picking coffee beans in steady rain.

Transgender women started arriving in Santuario from the reservation about 6 years ago and now there are around 50 of them living in town, says researcher and anthropologist Jairo Tabares. There is no official count.

On weekends, the women gather in large groups in Santuario’s town square – to chat and shop, mostly.

Sunday is the day for sweethearts.

John Palacios, 23, strolls past a church with his trans girlfriend Jessica Bucama, 19. They both work on the coffee plantations. And on this day, they are both dressed to kill.

“I am in love,” said Palacios, who expresses sadness however that Bucama cannot have children with him.

While the locals accept the transgender women on the surface, they remain on the margins of society, admitted Mayor Everardo Ochoa.

At night, the women go back to their barracks-style dormitories on the plantations.

At one plantation called El Paraiso, a dozen women are at work.

The pay is meager.

Tascon makes $27 a week, more than most, getting paid by the weight of what she picks. But from that, her expenses at company stores are deducted along with room and board.

At harvest time, plantation owners complain of a labor shortage. They say non-indigenous people do not want this kind of grueling work.

“If it were not for the Emberas, I don’t know what we would do,” said Jorge Martinez, the plantation’s manager.

The mayor says both sides come out winning.

But Tabares, the anthropologist, insisted that for all the bragging Santuario does about being open-minded, these women provide a much-needed cheap source of labor.

Tascon says she dreams of leaving coffee beans behind some day and going far away to another country to have sex reassignment surgery and, eventually, children.