Jun 29, 2019 9:21 PM PHT
Agence France-Presse
Facebook Twitter Copy URL
Copied
The plan to use traditional methods is implemented this year in a bid to preserve the original look of China's famous landmark 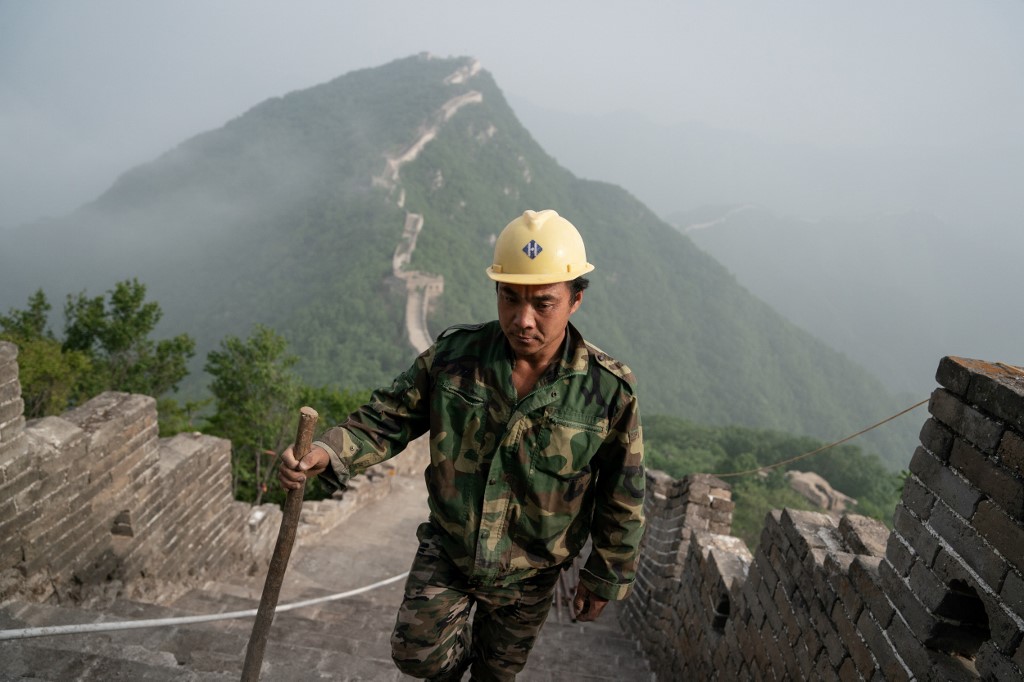 BEIJING, China – Nature, time, neglect and millions of footsteps have taken their toll on the Great Wall of China leaving much of it crumbling, but repairing it can be painstaking – and controversial – work.

After public outcry when a 700-year-old section of the monument was ‘fixed’ by covering it with cement – authorities insisted on more authentic restoration using traditional methods: so now laborers, aided by mules, use reclaimed stones and mortar.

“They are all the bricks that collapsed from the original wall. The bricks are used to mend these places,” said Li Jingdong, one of the workers restoring the Jiankou section.

Around him, laborers use an electric hoist to put a large stone that had fallen from the wall back in place, while mules traverse the steep mountainside bringing water and lime mortar for workers to mix and bind the stones with.

It is physically demanding work – placing one rock can take around 45 minutes and for their efforts, they are paid 150 yuan ($22) per day.

The plan to use traditional methods was implemented earlier this year in a bid to preserve the original look of China’s famous landmark, which is split into sections that altogether stretch for thousands of kilometres from China’s east coast to the edge of the Gobi desert.

Engineer Cheng Yongmao, who has led operations in Jiankou for 15 years, said the latest restoration plan is meant to make “people feel that it has not been repaired”.

Construction of the Great Wall first began in the third century BC and continued for centuries. Nearly 6,300 kilometers, including the Jiankou section, were built in the Ming Dynasty of 1368-1644.

Today it attracts around 10 million tourists per year – but the swell of visitors, combined with age and weathering, has left swathes of it in ruins.

In places it is so dilapidated that estimates of its total length vary from 9,000 to 21,000 kilometers, depending on whether missing sections are included.

To protect the relic, authorities in the heavily-visited Badaling section of the wall decided to cap visits to 65,000 people per day from June 1.

In 2016, a section of the Great Wall in northeast Liaoning province was covered in cement, turning the uneven path – originally built in 1381 – into a flat surface which some compared to an ordinary pavement.

In response to that and other less high-profile cases, the Ministry of Culture and Tourism released a new conservation plan earlier this year based on the principle of minimum intervention to restore the wall.

Song Xinchao, deputy director of the National Cultural Heritage Administration said some of those tasked with preserving the wall have “stereotyped ideas” that every portion should look like Beijing’s Badaling section, a heavily visited site that includes cable cars.

“They confuse restoration of the wall with the development of a tourist attraction,” Xinchiao was quoted as saying the state-run China Daily earlier this year.

But on the ground, some workers view the new method with skepticism.

“In the past, we repaired the entire ground. Now the idea is to repair less and keep more of the original things intact,” said Li Jingdong.

While the new regulation will accomplish the goal of keeping the aesthetic of the old wall, Li fears that such repairs will not last and the structure will keep falling apart.

He explained: “The idea is right, but I personally think that it still looks tattered after being repaired. Especially in the slopes, it will break in less a year under the feet (of tourists).” – Rappler.com