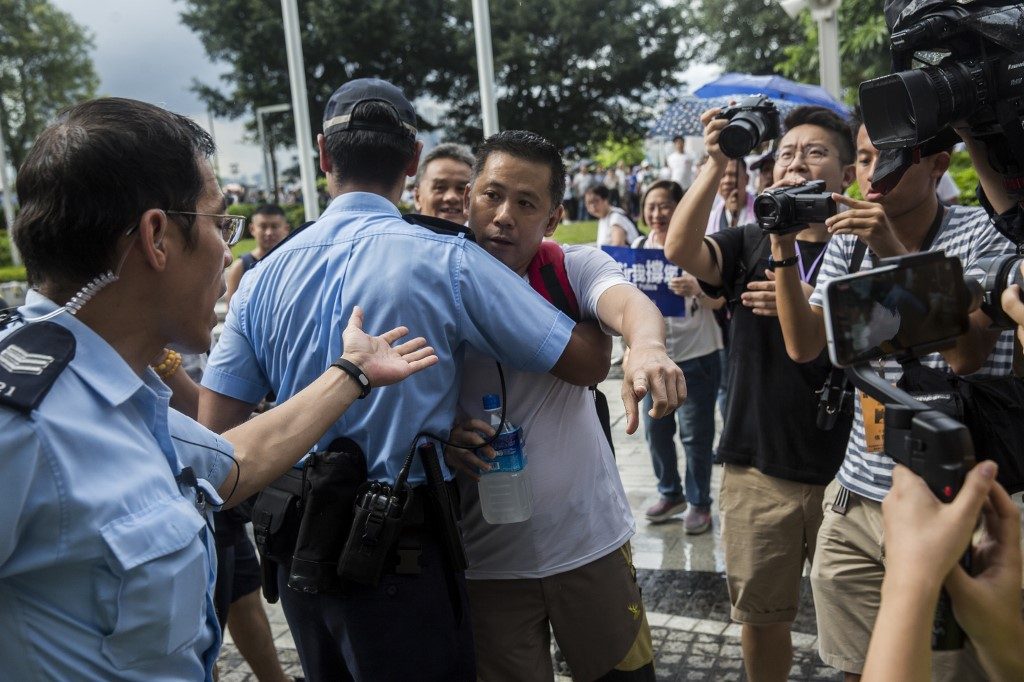 Facebook Twitter Copy URL
Copied
As the pro-government supporters head home, many turn on small groups of anti-government opponents who keep a small camp outside the parliament

HONG KONG – Angry confrontations broke out around Hong Kong’s parliament Sunday, June 30, as protesters supporting the city’s police taunted anti-government demonstrators on the eve of the anniversary of the semi-autonomous territory’s 1997 handover from Britain to China.

Crowds of police supporters chanted “Chinese traitors!” and profanities at their largely young opponents – highlighting the ideological fissures running through the finance hub as it experiences its worst political unrest in a generation.

But it has also been rocked by unprecedented clashes.

The police classified the demonstration as a riot and defended their tactics, but opponents have accused officers of using excessive force and called for an independent inquiry.

Twice in the last two weeks the city’s police headquarters has been blockaded by angry crowds.

On Sunday, it was the turn of pro-government supporters, who rallied in their tens of thousands, many waving Chinese flags.

A 54-year-old office worker, who gave his surname as Wong, said officers were trying to “maintain order” and that anti-extradition demonstrators had gone too far.

“It’s like they went crazy, those who charged, lambasted police… I find it so senseless,” he told Agence France-Presse.

The rally, which heard speeches from pro-Beijing lawmakers and former police brass, passed off without incident.

But as the pro-government supporters headed for home, many turned on small groups of anti-government opponents who have kept a small camp outside the parliament for the last 3 weeks.

Police had to repeatedly intervene to help largely young anti-government protesters escape after they were surrounded by larger crowds of pro-establishment supporters, many jabbing fingers in their opponents’ chests, scuffling with them and hurling insults.

“Traitors!” and “Rioters!” were the two most common chants from police supporters as well as a plethora of Cantonese swear words.

Much of the protest artwork and posters pinned to the city’s parliament walls were also torn down by police supporters as they passed by.

The pro-democracy camp will hold another rally on Monday, with organizers expecting a huge turnout.

The extradition protests were the latest manifestation of growing fears, especially among young Hong Kongers, that China is trampling on the city’s unique freedoms and culture – aided by the pro-Beijing government.

Years of protests calling for Hong Kongers to be able to elect their leaders have won no concessions from Beijing.

But there is also a staunchly nationalist, pro-establishment strain that runs through the city, especially among older generations, who regard pro-democracy protesters with disdain and welcome Beijing’s increased control.

Organizers of the pro-police rally told local media some 165,000 people attended while police gave a lower figure of 53,000 at its peak.

On Sunday, Zhou Fengsuo, a survivor of Beijing’s deadly Tiananmen crackdown, said he was denied entry into Hong Kong on arrival at the airport, posting a picture online of the refusal form he was given by immigration once he landed in Taiwan. – Rappler.com