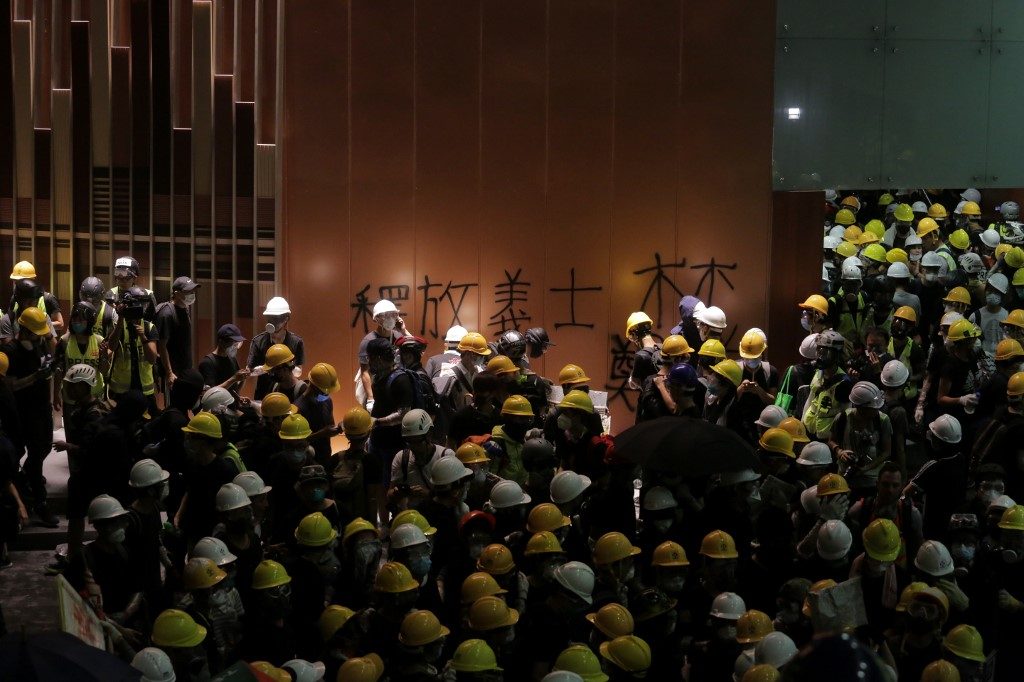 Facebook Twitter Copy URL
Copied
(5th UPDATE) Anti-government demonstrators breach the complex after hours of attempting to smash into the building, using a metal cart as a battering ram and wielding steel poles to prize open gaps in the reinforced windows

HONG KONG (5th UPDATE) – Hundreds of protesters stormed Hong Kong’s parliament late Monday, July 1, as the territory marked its China handover anniversary, ransacking the building and daubing its walls with graffiti as police warned they were poised to use “appropriate force” to clear the building.

The financial hub has been plunged into unprecedented political chaos after 3 weeks of record-breaking demonstrations against a hugely unpopular bill that would allow extraditions to the Chinese mainland.

Tens of thousands of democracy activists staged another peaceful march on Monday afternoon, calling for the city’s pro-Beijing leader to step down and reverse what they see as years of sliding freedoms.

Once inside they tore down portraits of the city’s leaders, hoisted a British colonial era flag in the main chamber and sprayed the city crest with black paint.

“There are no violent protesters, just tyranny,” one banner that was hoisted above the podium read.

“Hong Kong is not China,” read another.

Riot police appeared to have abandoned the building, which had been on lockdown.

Anti-government demonstrators breached the complex after hours of attempting to smash into the building, using a metal cart as a battering ram and wielding steel poles to prize open gaps in the reinforced windows.

Their brazen action was met with a warning from Hong Kong police who said they were poised to expel the protesters and would use “appropriate force” if they encountered “obstruction or resistance.”

Many protesters said they felt compelled to take the action because the city’s pro-Beijing leaders had ignored public sentiment following marches against the loathed extradition law.

“We have marched, staged sit-ins…but the government has remained unmoved,” Joey, a 26-year-old protester, told Agence France-Presse as he walked over shattered glass inside the building.

“We have to show the government that we won’t just sit here and do nothing.”

A protester surnamed Cheung, 24, added: “We know that this is breaking the law, but we have no choice.” The past 3 weeks of rallies are the sharpest expression of fears over Chinese influence on the territory in decades.

Protesters accuse Beijing of stamping down on the city’s freedoms and culture with the help of the finance hub’s unelected leaders.

But the increasingly hardline tactics from some protesters have alienated some, with a large counter-rally in support of the police taking place on Sunday, June 30.

Although Hong Kong returned from British to Chinese rule on July 1, 1997, it is still administered separately under an arrangement known as “one country, two systems.”

Activists have organized a march every handover anniversary, calling for greater democratic freedoms – such as the right to elect the city’s leader.

They have mustered large crowds in recent years – including a two-month occupation of parts of the city center in 2014 – but have failed to win any concessions from Beijing.

This year’s rally is framed by unprecedented anti-government protests that have drawn millions, with the public angry over police use of tear gas and rubber bullets.

The spark for the current wave of protests was an attempt by chief executive Carrie Lam to pass the Beijing-backed extradition law, which she has now postponed following the public backlash.

But she has resisted calls to permanently shelve the law or step down.

As a result the demonstrations have morphed into a wider movement against her administration and Beijing.

Lam – who has kept out of the public eye since her climbdown and has record low approval ratings – attended a flag-raising ceremony early Monday, marking the moment the city returned to Chinese ownership 22 years ago.

Her speech stuck to the conciliatory tone she has used in recent weeks saying she recognized conflict had broken out.

“It has made me fully understand that as a politician, I need to be aware and accurately grasp the feelings of the people.”

Police said 13 officers were sent to hospital early on Monday after being doused by an “unknown liquid” from protesters while the government released a statement condemning protesters for using “extreme violence.”

But activists have vowed to keep up their civil disobedience campaign.

“Whatever happens we won’t lose heart,” Jason Chan, a 22-year-old accountant added. “Resistance is not a matter of a day or a week, it is long term.” – Rappler.com