Jul 1, 2019 2:57 PM PHT
Agence France-Presse
Facebook Twitter Copy URL
Copied
(UPDATED) 'Among the wounded, many children who were going to school,' according to a hospital statement 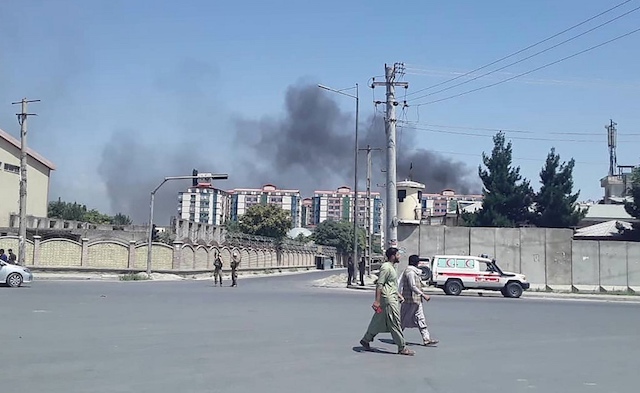 KABUL, Afghanistan (UPDATED) – At least one person was killed and dozens wounded in a Taliban-claimed attack which saw a powerful car bomb rock Kabul early Monday, July 1, followed by gunmen who battled special forces in an area housing military and government buildings.

Many children were among the wounded, according to a hospital statement, after the rush-hour explosion sent a plume of smoke into the air above the Puli Mahmood Khan neighborhood of the Afghan capital and shook buildings up to two kilometers (1.2 miles) away.

Agence France-Presse (AFP) reporters could hear gunshots and multiple smaller explosions as fighting between the gunmen and special forces continued more than 4 hours after the attack began.

“At first, a car bomb took place and then several attackers took over a building. The area is cordoned off by the police special forces and (they) are bringing down the attackers,” interior ministry spokesman Nasrat Rahimi said.

He later said that at least one attacker had been killed.

Health ministry spokesman Wahidullah Mayar said that at least one person had been killed and 65 wounded – including 9 children – and warned that casualties could rise.

“Among the wounded, many children who were going to school,” said the Twitter account of the Emergency Hospital in Kabul, where many victims were taken.

The Taliban claimed the attack, which came just two days after the insurgents began a seventh round of talks with the US in Qatar as Washington eyes a breakthrough before Afghanistan’s September presidential election.

Militant spokesman Zabiullah Mujahid released a statement saying the insurgents had targeted a defense ministry building in the area, which was quickly blocked off by Afghan forces and ambulances, with helicopter gunships seen overhead as firing continued.

Authorities have not confirmed the target.

“We were sitting inside the office when the world turned upside down on us,” Zaher Usman, an employee at a branch of the culture ministry, which he said stands just 150 meters (yards) from the blast.

“When I opened my eyes, the office was filled with smoke and dust and everything was broken, my colleagues were screaming,” Usman told AFP by telephone.

Shams Amini, a spokesman for the Afghan Football Federation, told AFP that the blast occurred near their HQ gates, and said some colleagues had been injured.

Nearby Shamshad TV station, which was attacked in 2017, aired images of broken glass and damage to its offices. “I was terrified,” Shamshad anchor Hashmat Stanikzai told AFP.

The explosion came as the US was set to begin a third day of negotiations with the militants in Doha. There was no immediate confirmation if they would go ahead after the blast.

With the attack still ongoing, the Taliban spokesman in Doha again insisted that the insurgents will not negotiate with Kabul.

“Once the timeline for the withdrawal of foreign forces is set in the presence of international observers, then we will begin the talks to the Afghan sides, but we will not talk to the Kabul administration as a government,” Suhail Shaheen tweeted.

The insurgents have long refused to negotiate with the Western-backed government, whom they deem puppets.

The talks have so far centered on 4 issues – counter-terrorism, the foreign troop presence, an intra-Afghan dialogue and a permanent ceasefire.

A potential deal would see the US agree to withdraw its troops after more than 17 years in Afghanistan, igniting deep concerns among Afghans who fear Washington will rush for the exits and allow the militants to return to some semblance of power.

In return, the Taliban would guarantee the country would never again become a safe haven for violent extremism, as happened with Al-Qaeda before the September 11, 2001 attacks.

However, US officials have insisted that “nothing is agreed until everything is agreed,” including intra-Afghan talks. – Rappler.com