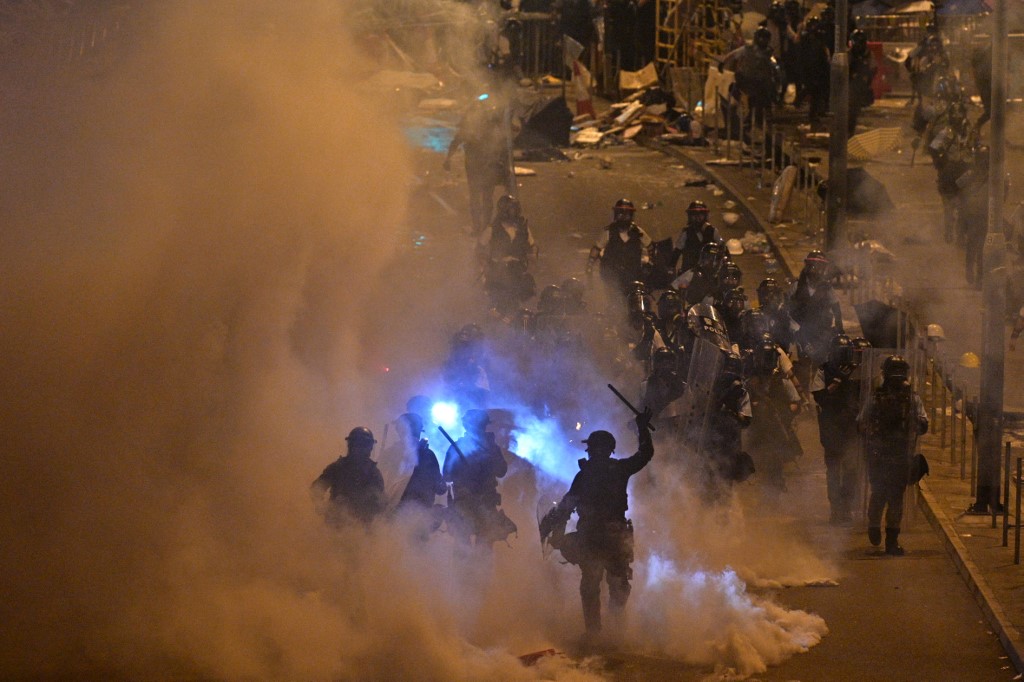 HONG KONG, China – Hong Kong police fired tear gas early Tuesday, July 2, to regain control of the city’s parliament after thousands of protesters occupied and ransacked the assembly in an unprecedented display of defiance on the anniversary of the territory’s handover to China.

US President Donald Trump said the demonstrators were “looking for democracy”, adding that “unfortunately, some governments don’t want democracy” – tough words for Beijing.

The semi-autonomous financial hub has been rocked by 3 weeks of huge demonstrations sparked by an unpopular bill that would allow extraditions to the Chinese mainland.

But on Monday, July 1, that anger reached levels unseen for years.

Masked protesters – mostly young and many wearing yellow hard hats – broke into the legislature after hours of clashes with police.

They ransacked the building, daubing its walls with anti-government graffiti, in an unparalleled challenge to city authorities and Beijing.

Police had warned of an impending crackdown, and just after midnight, officers moved in from several directions, firing tear gas and wielding batons as they charged – and sending plumes of smoke drifting across the city.

At a press conference in the early hours Tuesday, Hong Kong leader Carrie Lam condemned the “extremely violent” storming of the legislature, which she described as “heartbreaking and shocking”.

Huge crowds of democracy activists earlier staged a march calling for Lam, the city’s Beijing-appointed chief executive, to step down and for a reverse of what they see as years of sliding freedoms.

But the atmosphere deteriorated as the day wore on, and a hardcore group of protesters breached parliament after hours of siege.

Once inside, they tore down portraits of the city’s leaders, hoisted a British colonial-era flag in the main chamber and sprayed the city crest with black paint.

“There are no violent protesters, just tyranny,” read one banner, hoisted above the podium.

“Hong Kong is not China,” read another.

‘We have no choice’

Many protesters said they felt compelled to take action because the city’s leaders had ignored public sentiment.

“We have marched, staged sit-ins… but the government has remained unmoved,” Joey, a 26-year-old protester, told AFP as she walked over shattered glass inside the building.

“We have to show the government that we won’t just sit here and do nothing.”

The legislature will be closed on Tuesday.

The past 3 weeks of rallies are the sharpest expression of fears over Chinese influence on the territory in decades.

Protesters accuse Beijing of stifling the city’s freedoms and culture with the help of unelected leaders.

But the increasingly hardline tactics from some protesters have alienated some, with a large counter-rally in support of the police taking place on Sunday.

Although Hong Kong returned from British to Chinese rule on July 1, 1997, it is still administered separately under an arrangement known as “one country, two systems”.

Activists have organized a march every handover anniversary, calling for greater democratic freedoms – such as the right to elect the city’s leader.

They have mustered large crowds in recent years – including a two-month occupation of parts of the city center in 2014 – but have failed to win any concessions from Beijing.

The spark for the current wave of protests was an attempt by Lam to pass the Beijing-backed extradition law, which she has now postponed following the public backlash.

But she has resisted calls to permanently shelve the law or step down.

Her speech stuck to the conciliatory tone she has used in recent weeks, saying she recognized conflict had broken out.

“It has made me fully understand that as a politician, I need to be aware and accurately grasp the feelings of the people,” she said.

Britain’s Foreign Secretary Jeremy Hunt said his country’s support for Hong Kong and “its freedoms is unwavering” and urged restraint from protesters in comments echoed by the European Union.

A spokeswoman from the US State Department earlier urged “all sides to refrain from violence.”

But activists have vowed to keep up their civil disobedience campaign.

“Resistance is not a matter of a day or a week, it is long term.” – Rappler.com