Jul 3, 2019 12:08 AM PHT
Agence France-Presse
Facebook Twitter Copy URL
Copied
The tragedy in the far north has echoes of the sinking of the Kursk submarine in 2000 that claimed the lives of 118 personnel and shook the first year of Vladimir Putin's presidency 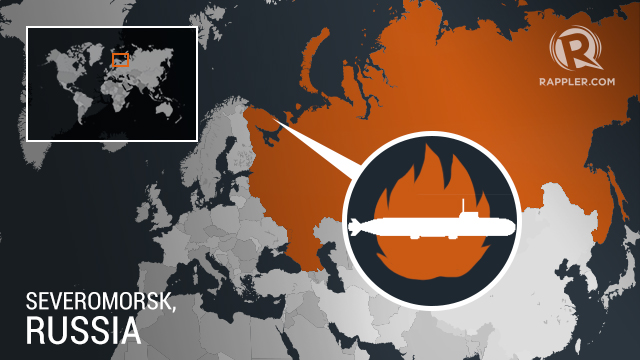 MOSCOW, Russia – Fourteen seamen have died in a fire on a deep submersible, Russia’s defense ministry said Tuesday, July 2, the latest in a string of disasters and accidents to hit the country’s navy.

The tragedy in the far north has echoes of the sinking of the Kursk submarine in 2000 that claimed the lives of 118 personnel and shook the first year of Vladimir Putin’s presidency.

“On July 1, a fire broke out during biometric measurements on a scientific research deep-sea submersible,” the defense ministry said.

Fourteen crew died as a result of poisoning from the fumes of the fire in Russia’s territorial waters, a ministry spokeswoman confirmed to Agence France-Presse (AFP).

The fire has been put out, the ministry said, adding an investigation was under way.

“The investigation is being conducted by the commander-in-chief of the navy.”

The research was conducted to study areas near the seabed and the seabed itself of the ocean in the interests of the Russian naval fleet, according to the ministry.

The vessel is now situated at a military base in the closed northern city of Severomorsk which is located on the Kola Peninsula above the Arctic Circle.

The defense ministry provided no other details.

Putin has yet to respond publicly to the disaster.

A military expert, speaking to AFP on condition of anonymity, rubbished claims that the fire happened during scientific research.

“Usually it’s a cover for different type of work conducted on the seabed” like laying cables, the expert said.

The RBC newspaper, citing a source in law enforcement agencies, said the accident took place in the submersible deployed from the AC-12 nuclear submarine known as Losharik.

Russia has seen a number of such accidents in the post-Soviet period.

In August 2000, the Kursk submarine sunk in the Barents Sea with the loss of all 118 aboard.

An inquiry found that a torpedo had exploded, detonating all the others.

Putin, who stayed on holiday for several days after the disaster, was severely criticized for his response.

Moscow also controversially turned down foreign offers of assistance for the rescue effort.

In another accident in 2008, twenty people – 3 naval officers and 17 civilians – were killed by poison gas after a vessel’s fire-extinguishing system was accidentally activated during trials in the Sea of Japan.

In 2011, one of Russia’s biggest nuclear submarines caught fire while undergoing repairs in dock in the northern Murmansk region.

Later it was reported the sub was armed with long-range nuclear missiles when it caught fire. – Rappler.com