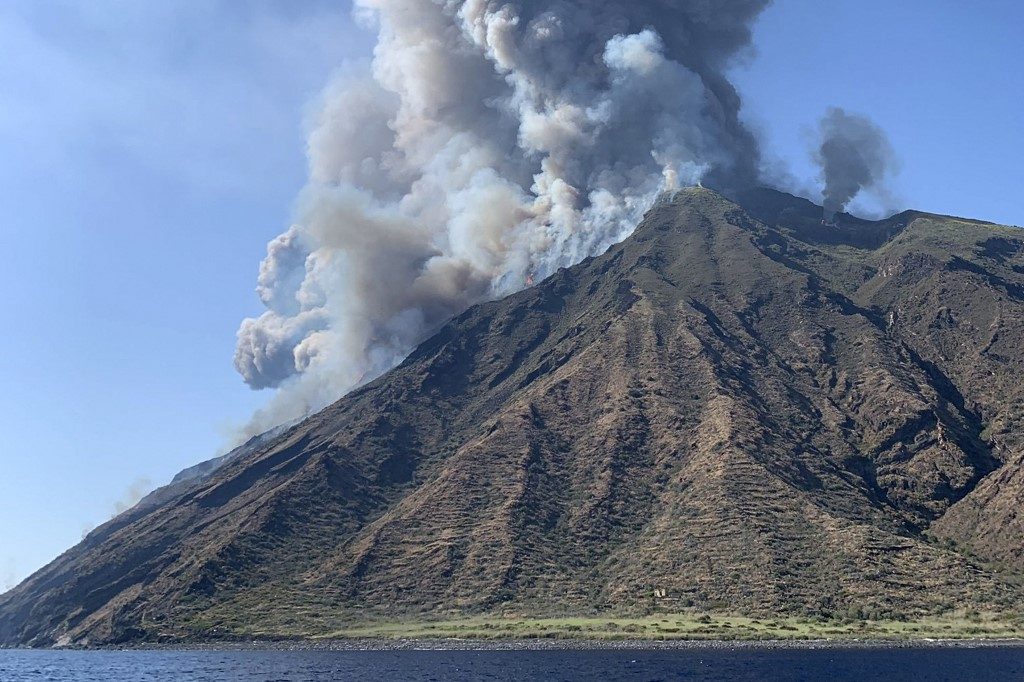 Facebook Twitter Copy URL
Copied
A veil of ash lay atop restaurant terrace tables, boats and parts of the coastline of the tiny island. The dramatic volcanic eruption killer a hiker.

STROMBOLI, Italy – The village of Ginostra on Stromboli began sweeping away layers of ash on Thursday, July 5, the day after a dramatic volcanic eruption on the tiny Italian island killed a hiker.

Emergency workers brushed and scooped volcanic cinders from streets and the tiny harbor in the village at the foot of the still smoking volcano.

A veil of ash lay atop restaurant terrace tables, boats and parts of the coastline.

Canadair water-bombing planes battled to put out fires started by two massive explosions which on Wednesday, July 3, sent plumes of smoke two kilometers (over a mile) into the sky.

Firefighters were inspecting buildings in Ginostra for damage, as people began returning to their often ash-covered homes.

Some people started bathing in the sea again on Thursday, the day after warnings of the risk of mini-tsunamis similar to those that previous eruptions have caused.

Volcanologists and locals told Italian media that the volcano was unlikely to erupt again in the near future.

Around 1,000 tourists on Wednesday fled the island aboard ferries to the nearby Calabrian coast. 70 people were evacuated from Ginostra on the volcano’s southwest flank.

Many left without their identity papers and luggage.

Sicilian hiker Massimo Imbesi, 35, was killed Wednesday when he was caught in the eruption’s flow of hot rocks and fumes, while his Brazilian walking companion suffered from shock, emergency services said.

They were walking below the 400 meter altitude limit above which a guide is required.

Several people suffered injuries, though none serious, they said.

Italy’s National Institute of Geophysics and Volcanology (INGV) said there were two huge explosions on the central-southern side of the volcano’s crater at around 1446 GMT Wednesday, one of the biggest ever recorded on the island.

Experts said that unusually the volcano, which volcanologists monitor constantly, had given no warning signs before erupting.

“Such phenomena are called paroxysmal eruptions and are rare. It happened in 1919, 1930, 2003 and 2007,” INGV vulcanologist Giuseppe Salerno told journalists.

A previous massive eruption over New Year 2002-2003 prompted a tidal wave after magma from a particularly violent eruption cascaded into the sea. Six people were injured.

Piers, boats and some buildings were swept away.

Access to the island was forbidden to outsiders for over a month amid the risk of further landslides and scientists set up electronic observation stations to monitor volcanic activity.

Stromboli was made famous in the 1950 film of the same name by Roberto Rossellini, starring Ingrid Bergman and is a major tourist attraction with thousands of people visiting its lava-spitting crater each year.

It is part of the seven-island Eolian Archipelago just off Sicily in southern Italy. – Rappler.com