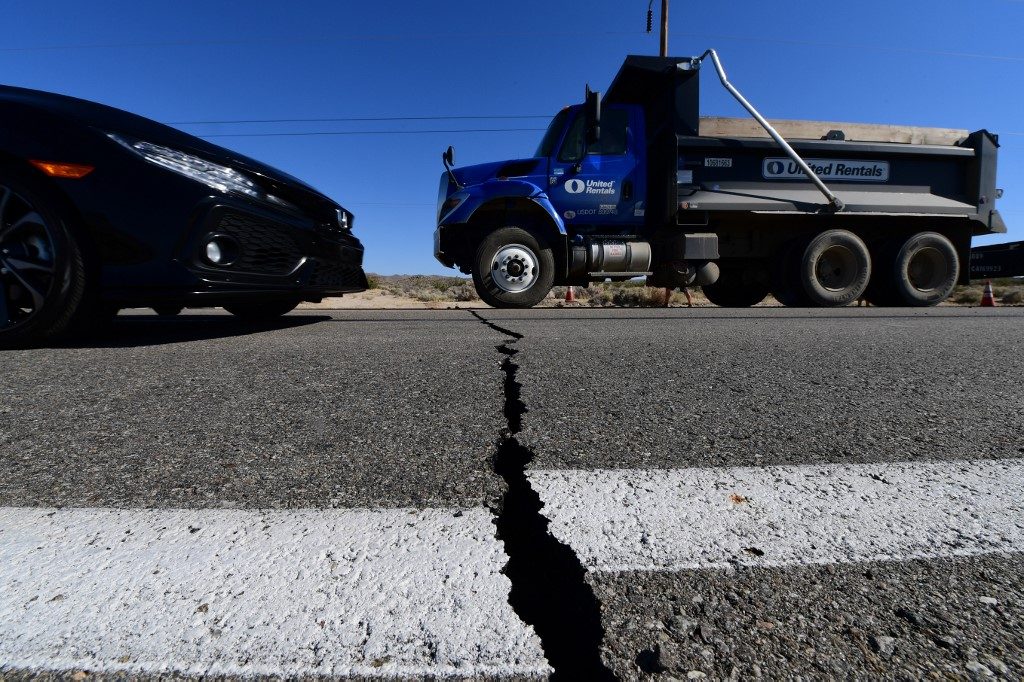 Facebook Twitter Copy URL
Copied
The magnitude 6.4 shallow quake, followed by dozens of aftershocks, struck in the Mojave Desert from the small city of Ridgecrest

LOS ANGELES, USA – Southern California was rocked by its largest earthquake in two decades on Thursday, July 4, a magnitude 6.4 magnitude temblor that caused “substantial damage” at a military facility but otherwise only minor injuries in the sparsely populated area.

The shallow quake, followed by dozens of aftershocks, struck in the Mojave Desert 6 miles (10 kilometers) from the small city of Ridgecrest at 10:33 am (1733 GMT).

It was felt 160 miles away in Los Angeles and even as far afield as Las Vegas in the neighboring state of Nevada, as the United States celebrated its July 4 Independence Day holiday.

Although the quake in the most populous US state of California revived fears of the “Big One” – a powerful tremor along the San Andreas Fault that could devastate major cities in Southern California – President Trump was quick to reassure that this wasn’t it.

“All seems to be very much under control!” he tweeted two hours after the quake in the Searles Valley of San Bernardino County.

The area “will continue having a lot of aftershocks,” some maybe as strong as magnitude 5, California Institute of Technology seismologist Lucy Jones told a press conference.

The earthquake was the largest in Southern California since 1999 when a 7.1-magnitude quake struck the Twentynine Palms Marine Corps base, according to The Los Angeles Times.

Thursday’s epicenter was in or on the edge of the US Navy’s sprawling desert bomb testing range known as China Lake.

The Naval Air Weapons Station covers 1.1 million acres (445,000 hectares) and strictly controls the airspace above it. Inside, the Navy develops and tests missiles, bombs, artillery shells and other war ordnance, and the aircraft used to deliver it.

An official at China Lake told AFP there was “substantial damage” to their facilities, including fires, water leaks and spills of hazardous materials.

Paul Dale, the station’s commanding officer, said later at a news conference that officials were making “damage assessments,” and declined to elaborate.

He was not able to provide an exact number of casualties.

Peggy Breeden, mayor of Ridgecrest which has a population of 28,000, said the local hospital had been evacuated as a precaution, and she had received reports of a handful of house fires.

Some areas of the city had lost power, while gas had been cut due to ruptured lines, she said.

The quake struck at a depth of 6.6 miles (10.7 kilometers) in the vast desert region.

Residents told local TV that the shaking set off panic, while sending televisions plunging to the ground and causing drawers to fall open.

AFP reporters in Los Angeles clearly felt the earthquake for about 10 seconds.

Los Angeles Mayor Eric Garcetti said there was no significant damage in the second-largest US city.

Jones said there is a small possibility this quake is the prelude to a larger one.

“There is about a one-in-20 chance that this location will be having an even bigger earthquake within the next few days, that we have not yet seen the biggest earthquake of the sequence,” she said.

“There have been hundreds of earthquakes today,” she said, including more than 100 that the United States Geological Survey measured at greater than magnitude 2.5.

But Jones noted that the quake was not along the San Andreas fault.

“It is an area with a lot of little faults but no long fault,” she tweeted.

For filmmaker Ava DuVernay, a lifelong resident of Los Angles, “that was the longest earthquake I’ve ever experienced. Not jerky. Smooth and rolling. But it was loooong.” – Rappler.com