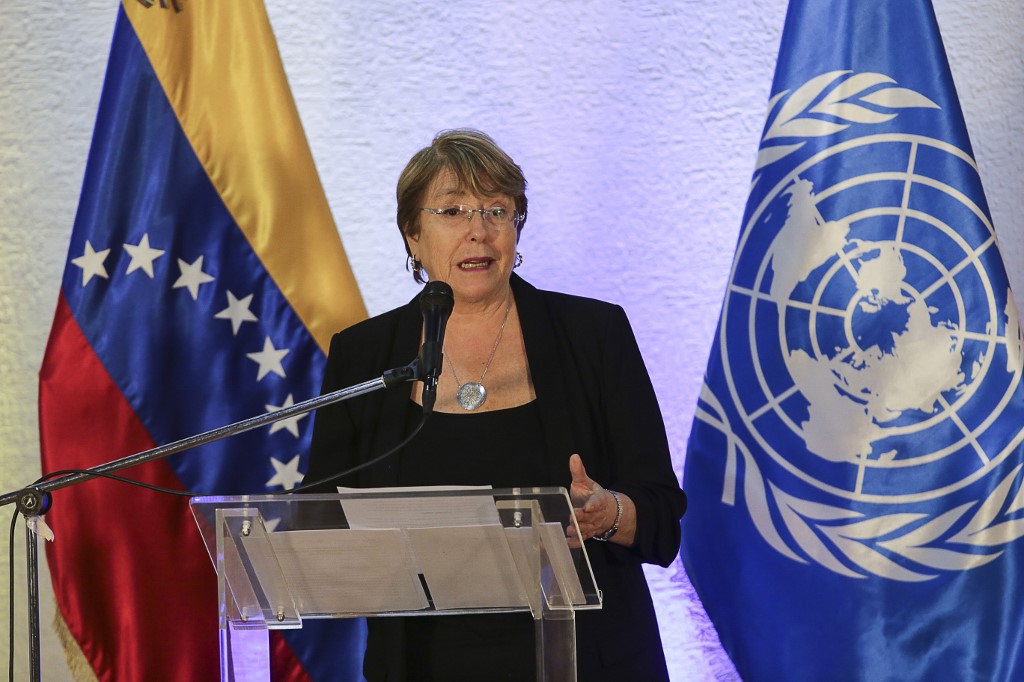 GENEVA, Switzerland (UPDATED) – The rule of law has eroded in Venezuela, the UN rights chief warned Friday, July 5, pointing to attacks on political opponents and activists, including torture and thousands of killings by security forces.

Presenting a damning report to the UN Human Rights Council, Michelle Bachelet said that attempting to exercise the most basic rights like freedom of opinion, expression, association and assembly “entails a risk of reprisals and repression.”

“Essential institutions and the rule of law in Venezuela have been eroded,” she said.

Venezuela immediately slammed the report, which was published late Thursday, July 4, and followed a visit by the UN High Commissioner for Human Rights to the troubled South American country last month.

The report “is dominated by a selective and partial vision,” William Castillo, Venezuela’s deputy foreign minister, told the council, demanding a “correction.”

The report indicated that nearly 7,000 people have been killed during security operations in Venezuela in the past year and a half, according to a count by Caracas, and warned that many of the killings likely constituted “executions.”

The UN rights office described the incidence of alleged extrajudicial killings by security forces in the country as “shockingly high.”

Bachelet stressed to the council Friday that the possible “extrajudicial killings…should be fully investigated with accountability of perpetrators, and guarantees of non-recurrence.”

In her report, she especially pointed a finger at Venezuela’s police special forces (FAES), and urged the authorities to “dissolve” the unit.

Castillo meanwhile said that Caracas “categorically rejects the criminalization of the security forces and the armed forces.”

He also lamented that Bachelet had ignored the “serious risks” facing Venezuela, pointing to “coup plans” and the threat of “foreign intervention” from US President Donald Trump.

Venezuela is caught in an economic crisis and a political standoff between President Nicolas Maduro’s government and National Assembly leader Juan Guaido.

The opposition leader, Guaido, declared himself interim president earlier this year, and has been recognized by the United States and more than 50 other countries.

The oil-rich nation is also suffering from hyperinflation and shortages of basic goods from food to medicine, a crisis that has forced millions to flee.

The UN estimates that more than 7 million Venezuelans are in need of urgent humanitarian aid.

Bachelet said “there are reasonable grounds to believe that grave violations of economic and social rights, including the rights to food and health, have been committed in Venezuela.”

She added that social programs had been used “as an instrument of social control.”

The UN rights chief also said the US oil embargo and other sanctions imposed on Venezuela were taking a harsh toll, further exacerbating “the effects of the economic crisis, and thus the humanitarian situation.”

She warned that the punitive measures appeared to be “affecting the state’s ability to provide basic health service to the populations.”

Despite her criticism of Caracas, Bachelet refrained from calling for an international investigation into the violations in the country, and said she wanted to give the government the opportunity to carry out reforms without setting a “deadline.”

She hailed increased cooperation from Venezuelan authorities, who granted her broad access during her recent visit and has agreed to a permanent presence by UN rights officers in the country.

She especially welcomed the release of 62 detainees around the time of her visit, and 22 more this Thursday, including the journalist Braulio Jatar and the judge Lourdes Afiuni.

The UN, she said, “encourages the authorities to release all others detained for the exercise of their human rights.” – Rappler.com