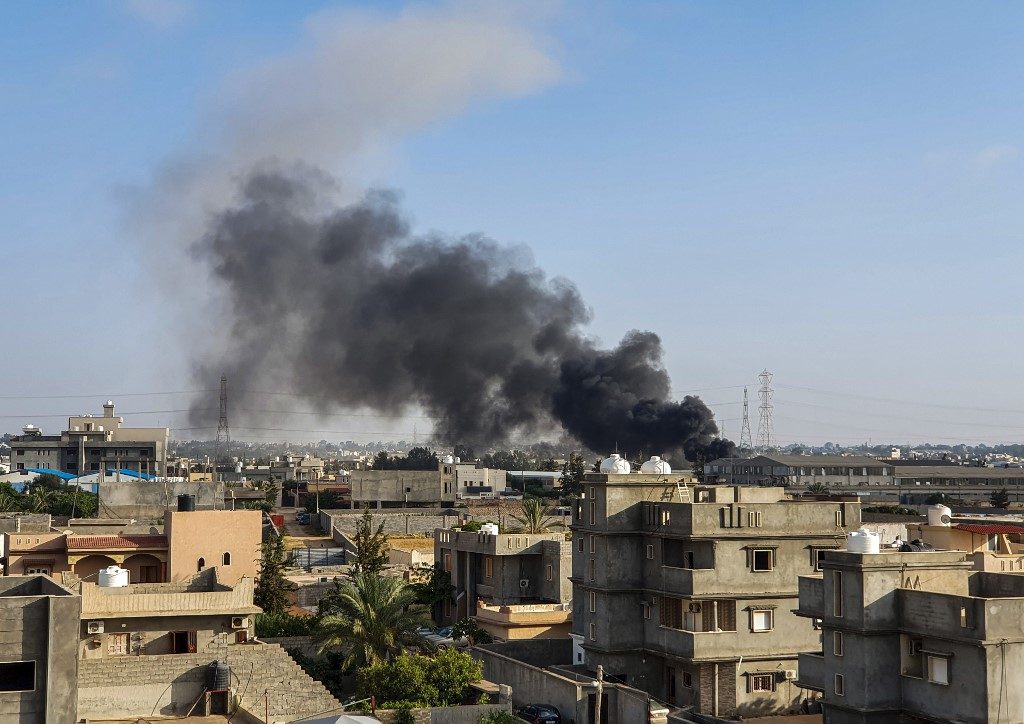 TRIPOLI, Libya – Some 1,000 people have been killed since Libyan strongman Khalifa Haftar launched a push 3 months ago to capture Tripoli, the UN said Friday, July 5, including 53 detained migrants who died in a devastating air strike.

Haftar’s self-styled Libyan National Army, which holds eastern Libya and much of the country’s south, launched an offensive in early April to wrestle the capital from forces loyal to the UN-recognized Government of National Accord (GNA).

Air strikes and ground fighting have since left nearly 1,000 people dead and some 5,000 wounded, the UN’s World Health Organization said, without specifying the breakdown between civilians and fighters.

The fighting has forced more than 100,000 people to flee their homes in a country mired by a bloody power struggle between militias since a NATO-backed uprising that toppled and killed dictator Moamer Kadhafi in 2011.

Among the dead are 53 migrants killed Tuesday night, July 2, in an air raid on a detention center in the Tripoli suburb of Tajoura, held by the GNA, which accused Haftar’s forces of carrying out the strike.

A Geneva-based spokesman for the International Organization for Migration said 6 children were among the migrants killed.

Joel Millman said that “350 migrants, including 20 women and 4 children” were still detained at the center, one of 5 air hangers hit in the raid.

Video surveillance footage from the detention center, circulated Friday on social media, showed people walking outside the hangar as a strong explosion erupted, triggering panic, and leaving behind clouds of smoke and dust.

UN agencies and humanitarian groups have repeatedly voiced concern over the plight of thousands and migrants and refugees held in detention centers near combat zones in the capital.

“The contact details of these detention centers in Tripoli are well known to both sides of the conflict,” spokesman for the UN’s refugee agency Charlie Yaxley said.

The carnage in Tajoura was “a tragedy that should have never happened,” he added.

Libya has become a major conduit for migrants seeking to reach Europe and remains prey to numerous militias vying for control of the country’s oil wealth.

Rights groups say migrants face horrifying abuses in Libya, and their plight has worsened since Haftar launched the offensive against Tripoli.

According to the UN, some 5,700 refugees and migrants are being held in detention centers in Libya, 3,300 of which are vulnerable to fighting in and around Tripoli.

An initial lightning assault in early April saw the LNA steam towards the capital. But they have since been bogged down on its southern outskirts, where frontlines have been frozen for months.

The GNA forces launched a surprise counter-attack late last month, seizing the strategic town of Gharyan, the main supply base for Haftar’s offensive.

After the setback, Haftar’s forces threatened to intensify strikes against their rivals.

Both sides have launched daily air raids throughout the fighting and each lost several planes.

Troops loyal to Haftar said late Thursday, July 4, they had downed a GNA jet near the town of Tarhuna, used by the LNA as a rear base some 80 kilometers (50 miles) southeast of Tripoli

A GNA spokesman said they had lost contact with the L39 Albatros, which had been on a combat mission south of the capital, without providing further details.

Taking advantage of international divisions over the fighting in Libya, the two rival camps have both remained convinced that with the help of their backers they can win the battle.

The GNA receives support from Turkey and Qatar, and Haftar is backed by the United Arab Emirates, Egypt, and according to experts, to some degree by the United States. – Rappler.com