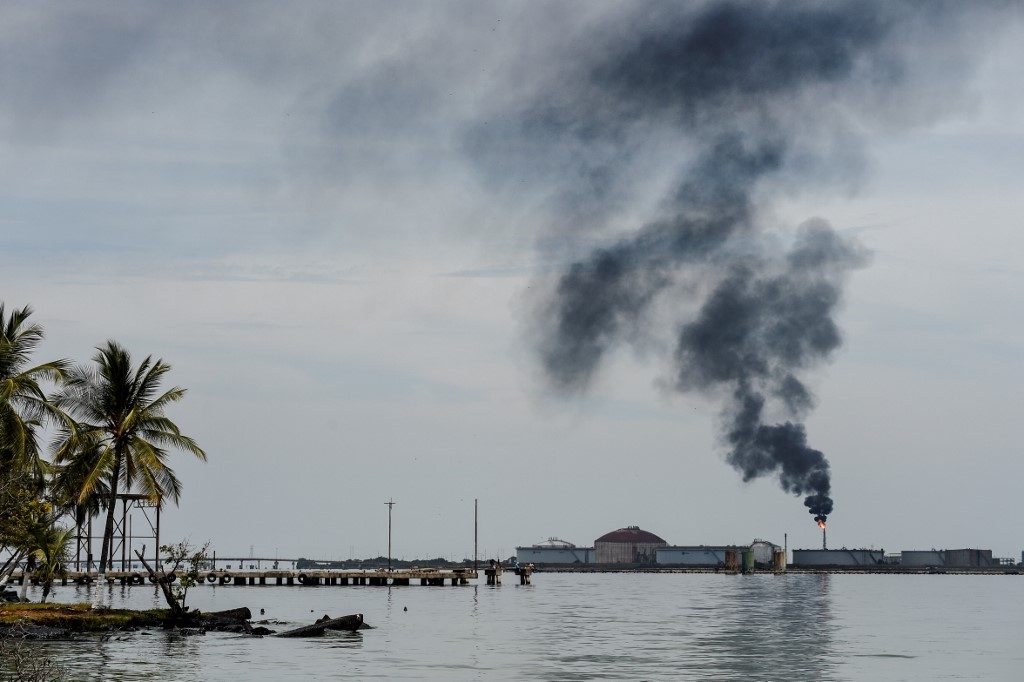 Facebook Twitter Copy URL
Copied
'Access to both refineries has been closed and they have been taken over by the National Guard and officials of the SEBIN intelligence service,' Luis Stefanelli, a National Assembly deputy, says

CARACAS, Venezuela – Venezuela’s largest refinery complex has been hit by a power outage, at a time of acute fuel shortages in parts of the crisis-torn oil producer, an opposition lawmaker said Sunday, July 7.

Luis Stefanelli, a deputy in the National Assembly, told the Agence France-Presse (AFP) there was a “general blackout” at the Amuay and Cardon refinery complex Saturday night, July 6.

“Access to both refineries has been closed and they have been taken over by the National Guard and officials of the SEBIN intelligence service,” he said.

“Some workers have been detained,” Stefanelli added.

Despite having the world’s largest oil reserves, Venezuela has experienced growing fuel shortages as corruption, mismanagement and, more recently, US sanctions take their toll on the oil industry.

Power failures are common in Venezuela and have grown in frequency since March especially in the interior of the country, which has also seen long lines at gasoline stations.

State oil company PDVSA has made no comment on the situation, which Stefanelli said had left most of the Paraguana peninsula where the refineries are located without power.

A Paraguana resident told AFP that telephone lines were down and surrounding areas “continue to be without light.”

Stefanelli said it was the third such incident at the refinery complex since 2015.

According to Stefanelli, production at the Paraguana refineries has fallen to about 80,000 barrels of gasoline a day.

The refinery complex has been the scene of other incidents, including an explosion in August 2012 at the Amuay complex that killed 42 people, left five missing and injured nearly 80 others.

Oil production, source of 96% of Venezuela’s income, has crumbled to its lowest levels in 30 years, from 3.2 million barrels a day a decade ago to less than one million today.

US sanctions targeting PDVSA, including an embargo in effect since April, have had an impact.

The measures are aimed at forcing the ouster of President Nicolas Maduro, who Washington says is a “dictator” and has presided over the worst crisis in the country’s recent history. – Rappler.com