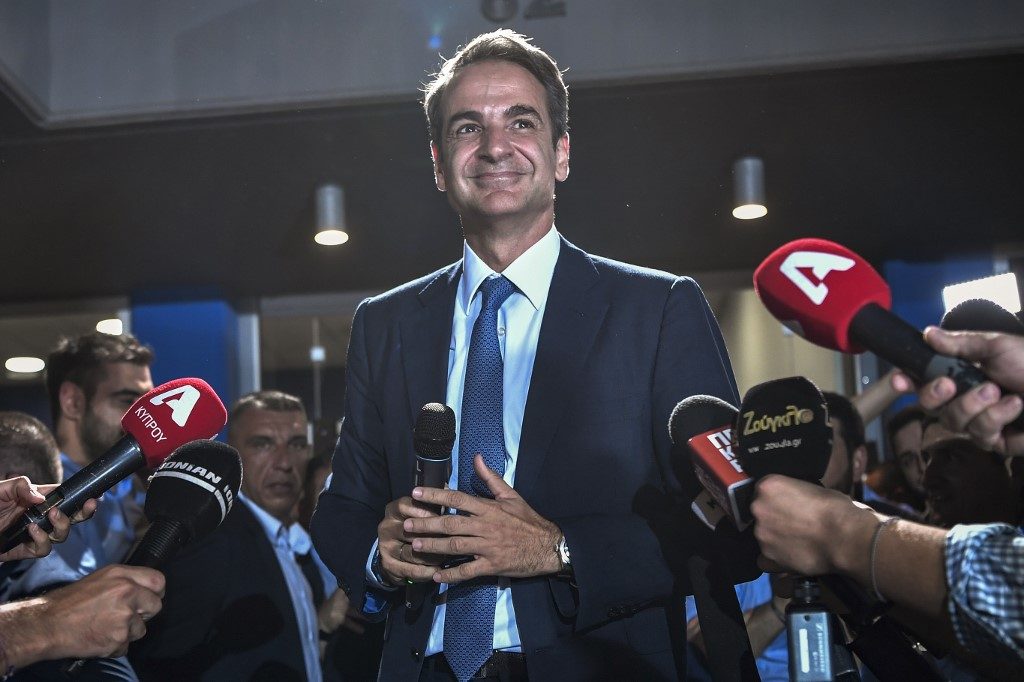 ATHENS, Greece – Greece’s conservative prime minister-elect Kyriakos Mitsotakis vowed that the country would “proudly” enter a post-bailout period of “jobs, security and growth” after winning a landslide victory in the country’s general election on Sunday, July 7.

“A painful cycle has closed,” Mitsotakis said in a televised address, adding that Greece would “proudly raise its head again” on his watch.

“I will not fail to honor your hopes,” he said as early congratulation calls came from outgoing European Commission chief Jean-Claude Juncker and Turkish President Recep Tayyip Erdogan.

With official results from 94% of polling stations, New Democracy scored a crushing victory by nearly 40% – its best score in over a decade – to 31.5 percent for Tsipras’s leftist Syriza party.

Mitsotakis will be sworn in as Greece’s new prime minister on Monday, July 8.

Tsipras had earlier admitted defeat after over 4 years in power that saw Greece emerge from its third bailout.

The 44-year-old warned that his Syriza party would “dynamically” resist efforts to scale back the party’s pro-labour reforms.

If the results are confirmed, the 51-year-old Harvard graduate and former McKinsey consultant Mitsotakis will have a majority of 158 lawmakers in the 300-seat parliament. Tsipras’s party will have 86 seats.

The final number will depend on how smaller parties fare. They need at least 3.0 percent of the vote to enter parliament.

New Democracy was last in power in 2014, in coalition with the Greek socialists.

Mitsotakis is a scion of one of Greece’s top political families.

He is the son of former prime minister Constantine Mitsotakis, one of the country’s longest-serving parliamentarians.

His sister is former minister Dora Bakoyannis, Athens’s first female mayor. And new Athens mayor Costas Bakoyannis, elected in May, is his nephew.

Sunday’s election was Greece’s third in as many months, and the first held in midsummer since 1928.

In May, New Democracy beat Syriza by nearly 9.5 points in European parliament elections. A week later, it completed a near-sweep of Greek regions in local elections.

After that, Tsipras was forced to call an early general election. His term was scheduled to end in the autumn.

Greece’s youngest premier in more than a century, Tsipras had trailed in the polls for months amid widespread dissatisfaction over high taxes.

“Greece is exiting 10 years of crisis and the new government will have the heavy task to give a chance to the country to recover completely or to sink”, 36-year-old Aphrodite told AFP, as she cast her vote in the bohemian downtown Athens neighborhood of Exarcheia.

“I hope that from tomorrow we will be able to breathe with relief. To take a deep breath, if Mitsotakis does what he promises,” added Athinodoros, a 48-year-old self-employed worker.

Tsipras has accused Mitsotakis — who was part of a 2012-2014 crisis government — of “disastrous” mismanagement that brought hundreds of thousands of job losses and business failures.

Mitsotakis has now pledged to create “better” jobs through growth, foreign investment and tax cuts and to “steamroll” obstacles to business.

Tsipras – who reduced unemployment and raised the minimum wage for the first time since 2012 – was criticised for campaigning as an anti-austerity crusader before eventually accepting a third EU bailout and the economic cutbacks that entailed.

In parts of the country, there was also a backlash against a controversial agreement with North Macedonia that ended a bitter 27-year dispute over the country’s name.

According to the exit polls, Varoufakis’s party could elect nine lawmakers.

Greek Solution could end up with 10 deputies, while neo-Nazi party Golden Dawn looks likely to be shut out of parliament for the first time since 2012.

Golden Dawn, until recently Greece’s third-ranking party, is in steep decline amid an ongoing trial for the 2013 murder of an anti-fascist rapper, allegedly carried out with the knowledge of senior Golden Dawn members.

Mitsotakis has promised to hit the ground running. A Eurogroup finance meeting on Monday will convene to discuss the state of Greece’s economy after tax cuts rolled out by Tsipras in May. – Rappler.com