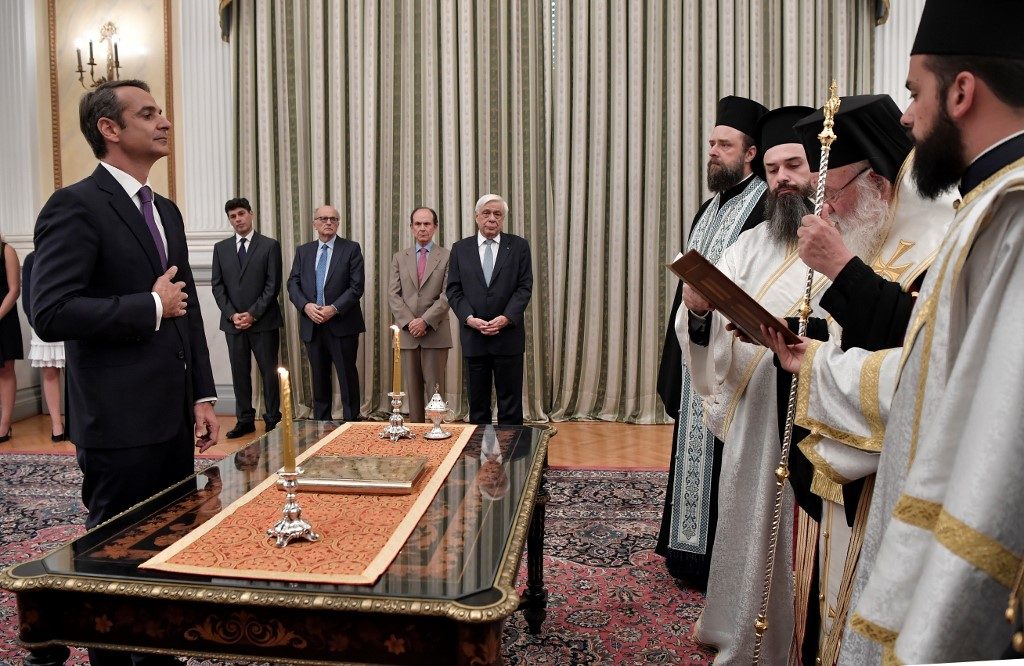 ATHENS, Greece – Greece’s new prime minister, Kyriakos Mitsotakis, formally takes up the reins Monday, July 8, a day after an election victory that puts him in charge of the EU’s most indebted member with promises to end a decade of economic crisis.

The challenge facing the US-educated conservative is a hefty one as he takes over from defeated leftwing leader Alexis Tsipras, who imposed austerity measures required under a bailout to keep Greece in the eurozone.

The debt load is forecast to fall to 168% of GDP this year, but only under belt-tightening brought in under Tsipras’s Syriza party – something that Mitsotakis’s New Democracy party says is stifling growth.

The tricky job of keeping Greece’s international creditors onside while easing the hardship on Greeks – by lowering taxes and renegotiating fiscal targets – could result in a short honeymoon phase for Mitsotakis.

The 51-year-old Harvard graduate and former McKinsey consultant has pledged to create jobs and get rid of obstacles to business.

Those pledges wooed Greek voters, who handed him 40% of the votes in the election on Sunday, July 7, well ahead of the 31.5% given to Tsipras.

“It’s a strong message for change in Greece,” Mitsotakis told the channel CNBC.

Last week he told Agence France-Presse that he saw it as his mission “to make sure we restart the economy” with “ambitious growth driven by private investments, exports and innovation.”

He predicted that he could persuade Greece’s creditors to accept the easing of tight fiscal targets if “a comprehensive reforms package” was presented.

Tsipras, for his part, warned that Mitsotakis would do away with the social spending he brought in to help Greece’s vulnerable groups.

He portrayed the Mitsotakis family – one of Greece’s leading political dynasties – as part of a failed system that bankrupted the country in 2010, which he blamed for the humiliating bailout.

Son of a PM

Mitsotakis is the son of former prime minister Constantine Mitsotakis, one of the country’s longest-serving parliamentarians. His sister Dora Bakoyannis is a former minister and Athens’s first female mayor.

He took charge of the New Democrats 3 years ago. Following the election, his party will have a majority of 158 seats in the 300-member parliament.

New Democracy was last in power in 2014, in coalition with the Greek socialists.

Syriza’s parliamentary presence will shrink from 144 seats to 86. Tsipras has promised to remain an “active” voice in opposition.

Sunday’s election was Greece’s third in as many months.

In May, New Democracy beat Syriza by nearly 9.5 points in European parliament elections. A week later, it completed a near-sweep of Greek regions in local elections. After that, Tsipras was forced to call an early general election.

“A painful cycle has closed,” Mitsotakis said in a televised address immediately following his electoral victory, adding that Greece would “proudly raise its head again” on his watch. – Rappler.com