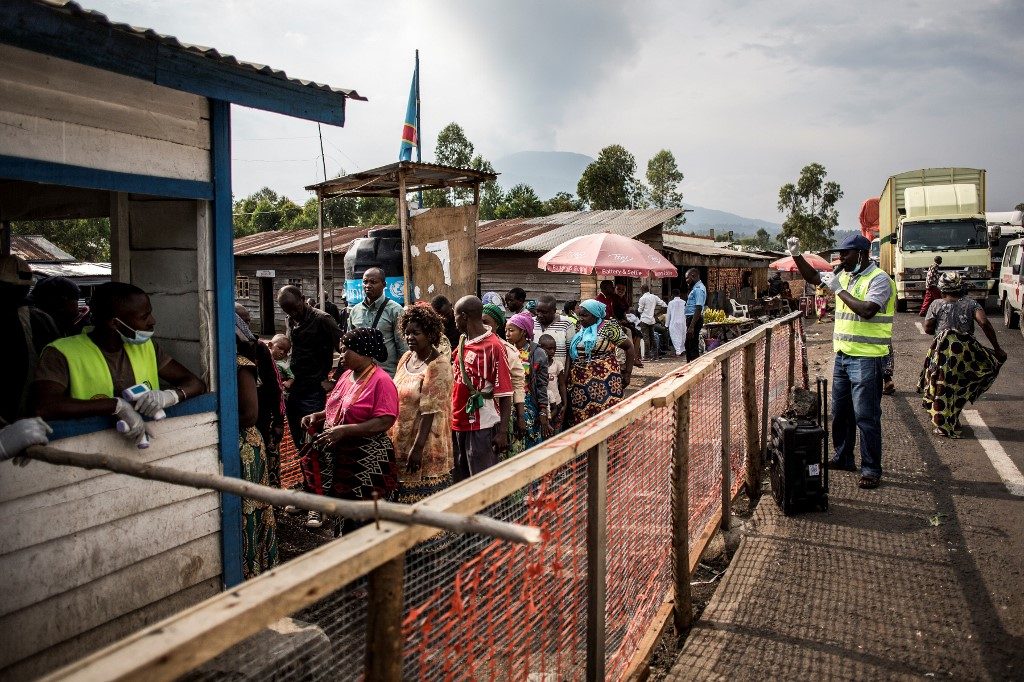 GOMA, DR Congo – The first patient to be diagnosed with Ebola in the eastern DR Congo city of Goma has died, the governor of North Kivu province said on Tuesday, July 16.

The case – the first in a major urban hub in the region’s nearly year-old epidemic of the disease – has sparked deep concern in neighboring Rwanda and at the UN.

France meanwhile appointed a top immunologist, Yves Levy, to spearhead its response to the outbreak.

“Unfortunately, I can confirm that the patient died,” the governor of North Kivu, Carly Nzanzu, told reporters.

The patient has been described as an evangelical preacher who had travelled from Goma to Butembo, one of the towns hardest hit by the outbreak.

While there, he preached at 7 churches and regularly touched worshippers, including the sick, before taking the bus back to Goma last Friday, the health ministry said.

On his return on Sunday, he went to a clinic with a fever, was diagnosed with Ebola and sent back to Butembo, which is better geared than Goma for treating the disease, it said.

“He died during transfer by road,” Nzanzu said.

More than 1,600 people have died from Ebola since August 1, when the haemorrhagic virus erupted in North Kivu and spread to neighbouring Ituri.

In cities, density of population, high mobility and anonymity make it far harder to isolate patients and trace contacts compared to the countryside.

Goma is a border city of about one million people located on the northern shore of Lake Kivu, adjacent to Rwanda.

It has a port that links to Bukavu and South Kivu province and an airport with flights to Kinshasa, the Ugandan capital Entebbe and Addis Ababa, the capital of Ethiopia.

The city abuts the Rwandan city of Gisenyi, and there is a high number of daily border crossings, involving workers and people who have jobs or homes on the other side of the frontier.

The UN’s World Health Organization (WHO) on Monday warned the Goma case was a “potential game-changer” in the fight to roll back the outbreak in the Democratic Republic of Congo.

It said it would reconvene a key panel to see whether the outbreak required a heightened global response.

Separately, Rwanda said Monday it would step up border monitoring and urged its citizens to avoid “unnecessary” travel to the eastern DRC.

Levy, as a former head of France’s prestigious National Institution of Health and Medical Research (INSERM), is well qualified for his new role coordinating the French response.

His appointment was announced a day after a top UN health official voiced criticism of France’s financial contribution to the Ebola campaign.

“We rely on the government of France for a lot of technical cooperation,” Mike Ryan, WHO’s emergencies chief, told reporters in Geneva on Monday.

“But as of this moment, WHO has not received any financial contribution from the government of France.”

“We need French-speaking expertise and above all we’re going to need a lot of money — into the hundreds of millions of dollars — to really get the depth of response we need.”

People infected with Ebola do not become contagious until symptoms appear, which is after an incubation period of between two and 21 days.

High fever, weakness, intense muscle and joint pain, headaches and a sore throat are often followed by vomiting and diarrhoea, skin eruptions, kidney and liver failure, internal and external bleeding. In the current epidemic, the mortality rate is running at 66%. – Rappler.com