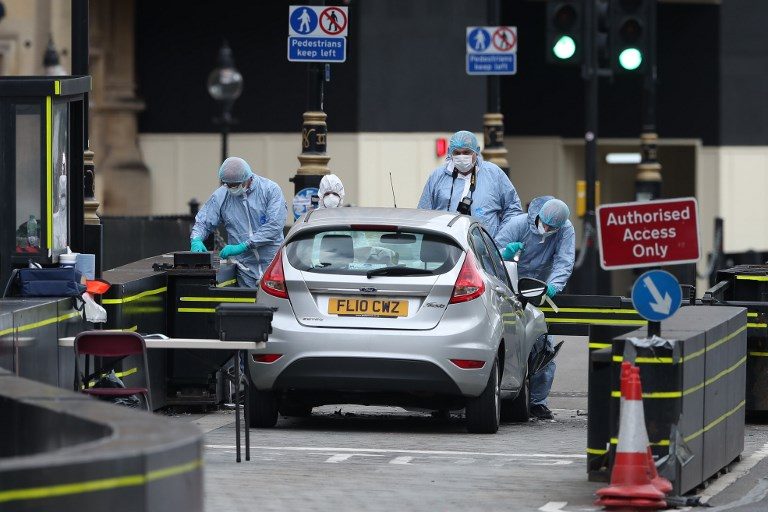 Facebook Twitter Copy URL
Copied
Although Salih Khater did not kill anyone, and ended up crashing the car into security barriers, the August 2018 attack sent several people to hospital for treatment

LONDON, United Kingdom – A London jury on Wednesday, July 17, convicted a man of attempted murder after he tried to mow down cyclists, pedestrians and police with his car outside the British parliament last year, in an attack prosecutors said had a terrorist motive.

Jurors at the Old Bailey, England’s central criminal court, agreed with the prosecution that Salih Khater, 30, had made “a deliberate attempt to kill and maim as many people as possible” when he steered the vehicle at his targets outside the Houses of Parliament last August.

Although the Sudanese-born British national did not kill anyone, and ended up crashing the car into security barriers, the August 14 attack sent several people to hospital for treatment.

The counter-terrorism division at England’s Crown Prosecution Service (CPS) said it was reasonable to assume he had a terrorist motive.

It noted that he chose “an iconic site of national importance which had been subjected to terrorist attacks in the recent past”.

Jenny Hopkins, from the CPS, said: “Whatever his motives, this was not an accident. It was a deliberate attempt to kill and maim as many people as possible.”

The court heard that Khater – who was born in Sudan and granted asylum in Britain in 2010 – drove around Parliament Square several times before veering off at speed to strike a jogger.

He then plowed through a group of 14 cyclists before accelerating towards two uniformed police officers standing by a security barrier outside parliament, who leapt away to avoid being hit by the vehicle.

The jogger was left lying on the ground with abrasions and heavy bruising, while 6 of the cyclists received injuries including a broken collar bone and bruising.

Khater claimed during the trial that the incident was an accident.

But an accident investigator who analysed security camera footage of the incident concluded that Khater had deliberately maneuvered his car in the moments leading up to the attack “with a high level of concentration”, according to the CPS.

“His driving was so precise and determined that it was difficult for skilled accident investigators to repeat the manoeuvre he carried out,” Hopkins said.

She added it was “only quick reactions and good luck that stopped Salih Khater killing anyone”.

It emerged that the resident of Birmingham in central England had unsuccessfully applied for a fast-track British passport the previous day, before driving straight to London.

“Khater remained silent throughout our investigation and only at his trial offered the implausible explanation that it was an accident,” he added. “However, the evidence showed otherwise.”

Khater will be sentenced in October, when the judge will also consider whether the offenses were committed with a terrorist connection.

He could face life in prison for the two counts of attempted murder. – Rappler.com