Putin says he will work to restore Ukraine ties 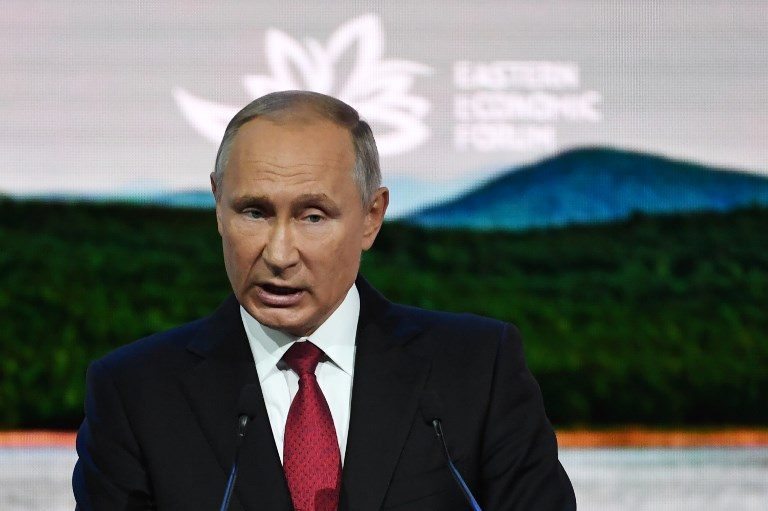 Facebook Twitter Copy URL
Copied
The Russian leader holds talks in Saint Petersburg with Viktor Medvedchuk, a pro-Moscow Ukrainian politician and businessman who has claimed Putin is his daughter's godfather

MOSCOW, Russia – President Vladimir Putin on Thursday, July 18, said Russia was ready to work with any political party to restore ties with Kiev as he met with a pro-Kremlin politician ahead of Ukraine’s parliamentary polls.

The Russian leader held talks in Saint Petersburg with Viktor Medvedchuk, a pro-Moscow Ukrainian politician and businessman who has claimed Putin is his daughter’s godfather.

“The issue of full-blown resumption of Russian-Ukrainian relations is extremely important for us, and we will cooperate with any political party, including your political party, to resume full-fledged relations,” Putin told Medvedchuk in televised remarks.

Ukrainians are going to polls on Sunday to elect a new parliament.

Medvedchuk’s pro-Moscow party called Opposition Platform – For Life is the second most popular in opinion polls, with up to 14% of voter support.

Ties between Ukraine and Russia were shredded after a bloody uprising ousted a Kremlin-backed regime in Kiev in 2014, prompting Moscow to annex Crimea and support insurgents in eastern Ukraine in a conflict that has claimed around 13,000 lives.

Kiev and the West have accused the Kremlin of funnelling arms and troops across the border to support the insurgents.

Russia has been chafing under several rounds of Western sanctions but has always denied providing military backing to the insurgents despite evidence to the contrary.

During the meeting with Medvedchuk, Putin once again called on Kiev to hold direct talks with the separatists who have carved out two breakaway regions, the Lugansk People’s Republic and Donetsk People’s Republic, in eastern Ukraine.

“Not a single conflict in the world in recent history was solved without direct talks between conflicting parties,” Putin said.

Medvedchuk told Putin that “many people in Ukraine” welcomed the phone talks.

Zelensky, a 41-year-old comedian, shocked Ukraine by becoming the country’s youngest ever post-Soviet leader in April.

He called early elections to consolidate his success and opinion polls predict that his party, Servant of the People, will win most seats.  – Rappler.com