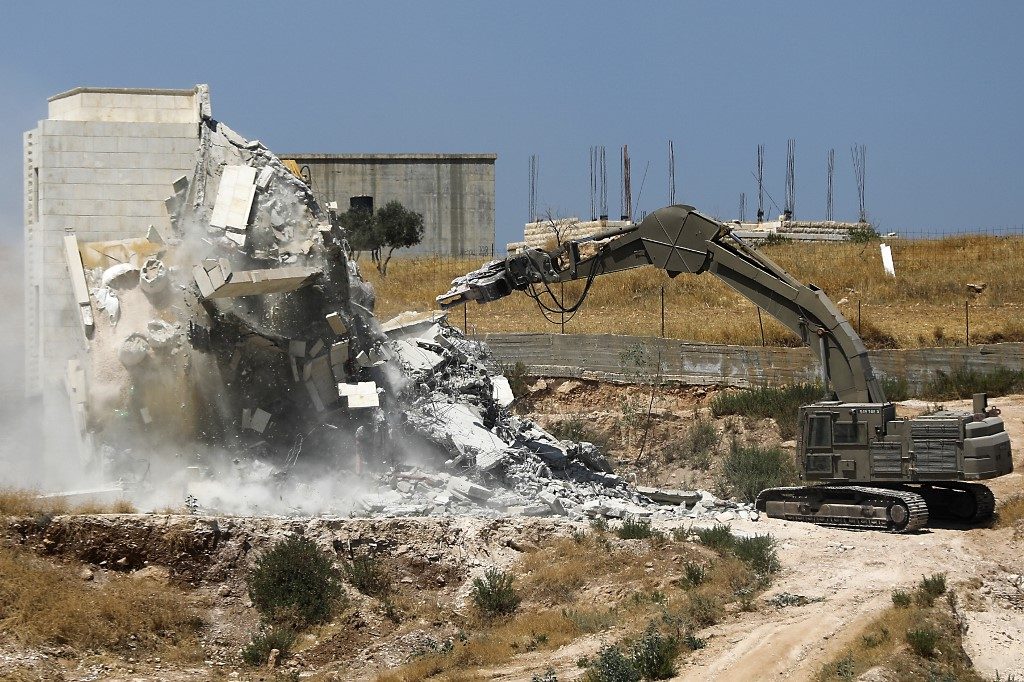 Facebook Twitter Copy URL
Copied
Residents and activists are dragged out of the homes, many of which are still under construction

The Palestinians immediately slammed the demolitions in the Sur Baher area which straddles the West Bank and Jerusalem, but Israel defended the move as essential to its security.

Before dawn, hundreds of Israeli police and soldiers sealed off buildings in the area close to the Israeli security barrier which cuts off the occupied West Bank, an Agence France-Presse (AFP) journalist said.

Residents and activists were dragged out of the homes, many of which were still under construction.

Earthmovers then demolished at least 3 multi-story buildings, the journalist said. They appeared to be preparing to destroy an eight-story building under construction at Monday lunchtime.

One man yelled “I want to die here,” after being forced out.

Ismail Abadiyeh, who lived in one of the buildings destroyed, said he and his family would be left homeless.

“We will be on the street,” he told AFP.

Israel says the buildings were built too close to the separation barrier that it built to stop attacks from the West Bank.

Palestinians accuse Israel of using security as a pretext to force them out of the area as part of long-term efforts to expand settlements and roads linking them.

They also point out that most of the buildings are located in areas meant to be under Palestinian Authority civilian control under the agreements between the Palestinian and Israeli governments.

“What is painfully happening here is the biggest and most dangerous demolition operation outside of war operations,” Walid Asaf, the Palestinian minister in charge of monitoring Israeli settlements, said in a video from the site.

In a statement Palestinian president Mahmud Abbas called on the “international community to intervene immediately to stop this aggression against our people.”

Israeli Public Security Minister Gilad Erdan accused the Palestinians of “lies,” stressing the demolition was validated by the state’s top court after a lengthy process.

“The structures were built illegally next to the security fence and constitute a risk to the lives of the civilians and security forces,” Erdan cited the supreme court ruling in a tweet, noting the demolitions were due to be completed within the day.

Prime Minister Benjamin Netanyahu’s spokesman Ofir Gendelman linked the demolitions to Palestinian attempts to sneak past the wall into Israel.

“During the last year there were hundreds of security incidents and thousands of attempts by Palestinians to infiltrate our territory, some of them to carry out terrorist operations,” he tweeted.

The Jewish state began construction of the barrier during the bloody second Palestinian intifada, or uprising, in the early 2000s and says it is necessary to protect against attacks.

Palestinians see it as an “apartheid wall.”

On June 18, residents in Sur Baher received a 30-day notice from Israeli authorities informing them of their intent to demolish the homes.

The UN humanitarian affairs agency OCHA, says the ruling affects 10 buildings already built or under construction, including around 70 apartments.

The demolitions would see 17 people displaced and another 350 affected, the United Nations says.

The UN has warned ahead of the demolitions that “displacement, particularly for the most vulnerable, is traumatic and has lasting consequences.”

Diplomats, most of them from the European Union, recently toured the area.

Residents fear another 100 buildings in the area in a similar situation could be at risk in the near future.

It is extremely difficult for Palestinians to receive construction permits from Israeli authorities in areas under their control, and Palestinians and rights activists say a housing shortage has resulted. – Rappler.com