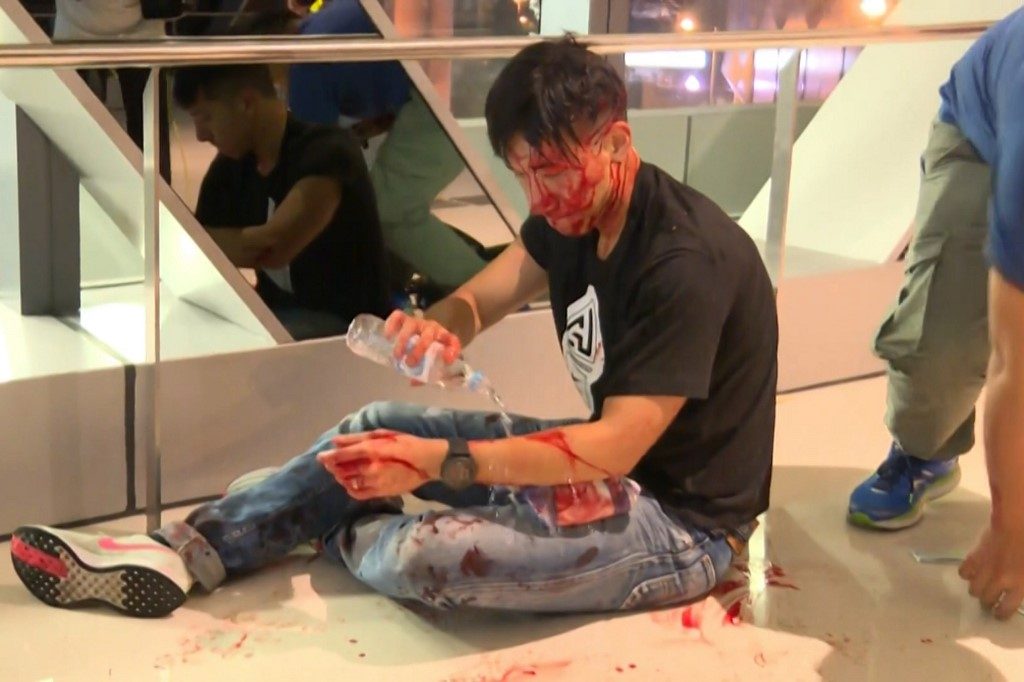 HONG KONG, China – An assault on pro-democracy protesters by suspected triad gangsters that left dozens wounded sparked a firestorm of outrage in Hong Kong on Monday, July 21, in a dramatic escalation of political turmoil plaguing the Chinese city.

Gangs of men – most wearing white T-shirts and carrying bats, sticks and metal poles – set upon anti-government demonstrators late Sunday, July 21, who had been returning from a huge anti-government march.

Footage broadcast live on Facebook showed people screaming as the assailants beat multiple protesters and journalists in a subway station and in trains carriages, leaving pools of blood on the floor.

Medical authorities said 45 people were hurt, with one man in a critical condition and 5 others seriously wounded.

Critics accused the city’s embattled police force of taking more than an hour to reach the site and failing to arrest the attackers who stayed in the streets around the station into Monday morning.

‘Shame on the government’

Lam Cheuk-ting, a pro-democracy lawmaker who sustained cuts to his face and arms, criticized police for their response and accused “triad members” of being behind the attacks.

Furious fellow pro-democracy lawmakers told a news conference on Monday the city’s pro-Beijing leaders were turning a blind eye to the attacks.

“This is triad gangs beating up Hong Kong people,” fumed legislator Alvin Yeung. “Yet you pretend nothing had happened?”

“Definitely our manpower is stretched,” he told reporters, dismissing any suggestion police colluded with triads.

At a briefing around midnight Monday into Tuesday, July 23, police said 6 men had been arrested, including some with alleged triad backgrounds.

The violence broke out in the New Territories near the Chinese border, where criminal gangs and staunchly pro-Beijing rural committees remain influential.

Similar assaults by pro-government vigilantes against demonstrators during the 2014 “Umbrella Movement” protests were blamed on triads.

On Monday afternoon, masked protesters trashed the office of staunch pro-Beijing lawmaker Junius Ho, who was filmed shaking hands with white-shirted men in the vicinity of the attacks shortly before they started.

Weeks of marches, and sporadic clashes, have left Beijing’s authority in the city of 7 million facing its most serious test since Britain handed it back to China in 1997 under a deal that allowed Hong Kongers to keep liberties including an independent judiciary and freedom of speech.

The initial demonstrations were sparked by a now-suspended bill that would have allowed extraditions to mainland China, but they have evolved into a wider movement calling for democratic reform and a halt to sliding freedoms in the territory.

The foreign minister of self-ruled Taiwan, which Beijing sees as its own territory, supported the protesters’ calls.

“The way forward is genuine democratic elections, not violence in the streets & (subway) stations,” Joseph Wu tweeted on Monday.

“China could stop them if they wanted,” Trump said, adding that President Xi Jinping had “acted responsibly, very responsibly.”

“Actions by some radical demonstrators have affected the bottom line of the ‘one country, two systems’ principle, and that is absolutely intolerable,” foreign ministry spokesman Geng Shuang said in Beijing. – Rappler.com

Here are more stories about the Hong Kong pro-democracy protest: