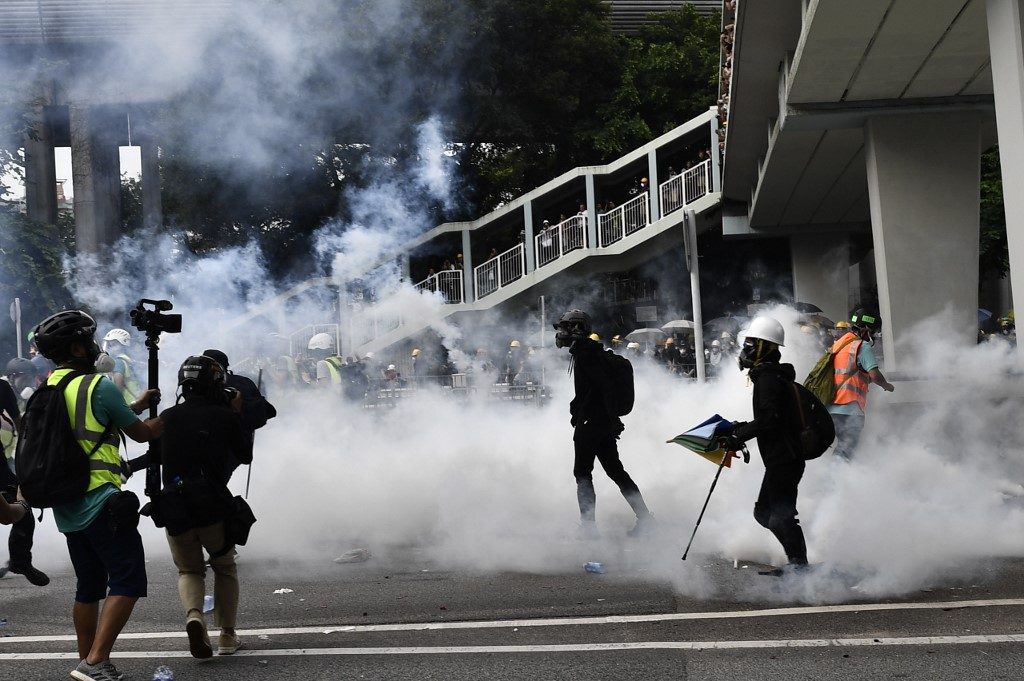 Riot police used tear gas throughout the afternoon and evening in Yuen Long, a town close to the border, after tense standoffs with protesters, some of whom were throwing projectiles and had surrounded a police van.

Hospital authorities said 9 people were injured, with 5 in a serious condition, as rubber bullets were fired later in the evening to disperse remaining protesters.

Public anger has been raging since last Sunday, July 21 when a gang of men in white t-shirts, armed with poles and batons, set upon anti-government protesters and bystanders in Yuen Long station.

The brazen assault – which hospitalized at least 45 people – marked an escalation in 7 weeks of unprecedented political violence that shows little sign of abating as the city’s pro-Beijing leaders refuse to budge.

Police have been heavily criticized for being too slow to respond to Sunday’s violence, fueling accusations of collusion or turning a blind eye to the pro-government mob – allegations the force has denied.

Hong Kong has been plunged into its worst crisis in recent history after millions of demonstrators took to the streets – and sporadic violent confrontations erupted between police and pockets of hardcore protesters.

The demonstrations were triggered by a controversial bill which would have allowed extraditions to mainland China, but have evolved into a call for wider democratic reforms and a halt to sliding freedoms.

Saturday’s violence compounds the political crisis with the city’s pro-Beijing leadership seemingly unable, or unwilling, to end the chaos.

Yuen Long is in Hong Kong’s New Territories, a rural area where many of the surrounding villages are known for triad connections and their staunch support for the pro-Beijing establishment.

Police say they have arrested 12 people so far in connection with Sunday’s violence, nine of whom have known triad links.

The white shirt mob ran into two villages near Yuen Long station after their attack and later left without police making any arrests despite a large presence of officers.

These two villages became the focus of protester anger on Saturday.

The rally began peacefully. But small groups of more hardcore protesters, many in helmets and carrying shields, confronted police outside the villages and accused them of protecting triads.

Soon tear gas rounds were arcing through the air and a now-familiar pattern of running battles between police and protesters began.

Throughout the afternoon and into the evening protesters formed shield walls of umbrellas, scattering each time new volleys of tear gas came their way. Some hurled bricks and stones at police.

On one road, a parked Lexus that was found to have wooden sticks and clubs similar to those used in Sunday’s attacks inside it – as well as a Samurai-style sword – had been trashed.

By late evening only some 200 protesters remained around the main station.

In a rare move, police banned Saturday’s rally saying they feared reprisal attacks against villagers from protesters, a decision that only heightened public anger towards a force perceived to be protecting pro-government aggressors.

Social messaging channels used to organize the largely leaderless movement quickly filled up with vows from people to join in.

Some suggested holding a “shopping spree” in Yuen Long, others for a mass gathering of Pokemon Go, a popular mobile phone game.

Huge crowds spilled out of Yuen Long’s main station on Saturday afternoon and into surrounding streets where police maintained a large presence but kept their distance. Many shops were shuttered.

“Everyone of us came here on our own initiation,” a 25-year-old medical worker surnamed Ng, told Agence France-Presse. “So I don’t think this is an illegal assembly, I’ve just come here as an individual to tell people my thoughts.”

Another woman, surnamed Cheung, said she wanted to show “we are not afraid and that Hong Kongers won’t cower in fear”.

“The police and (the government) are together suppressing people’s freedom to express their views,” she added.

Weeks of unprecedented protests with huge turnouts – as well as frequent clashes and the sacking of parliament – have had little luck persuading Beijing or Hong Kong’s leaders.

Beijing has issued increasingly shrill condemnations in the last fortnight, but has left it to the city’s semi-autonomous government to deal with the situation.

City leader Carrie Lam has shown no sign of backing down beyond agreeing to suspend the extradition bill.

On Friday, July 26, thousands held a 10-hour protest at the airport arrival hall in a bid to “educate” visitors about their movement – especially those on the Chinese mainland where news is heavily censored.

The protest was peaceful and there was no disruption to flights.

Protesters also plan to march on Sunday, July 28 through a district where riot police fired tear gas and rubber bullets at projectile-hurling protesters the week before. – Rappler.com