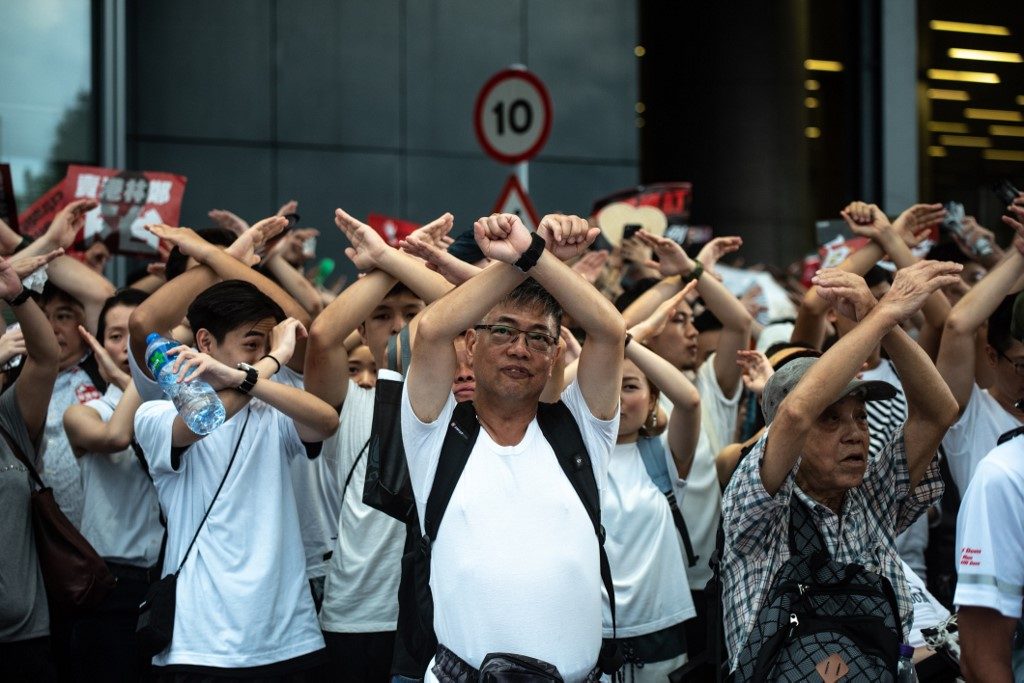 Huge crowds made their way through the main island’s streets in a now-familiar scene, but Sunday’s march had a key difference – police had banned it.

Officials had initially only given permission for a rally in a park in the commercial district known as Central.

But the crowds quickly spilled into the surrounding streets and began walking east in spite of the ban, ratcheting up the likelihood of renewed clashes.

The latest march comes a day after a town near the border with mainland China descended into chaos as police battled protesters holding another banned rally against suspected pro-government triad gangs who beat up democracy demonstrators there last weekend.

Riot police used tear gas throughout the afternoon and evening in Yuen Long after tense standoffs with protesters, some of whom were throwing projectiles and had surrounded a police van.

Rubber bullets were fired later in the clashes, which ended when officers baton-charged the last remaining demonstrators inside the town’s metro station, leaving pools of blood in the same concourse where the suspected triads had attacked the previous weekend.

Saturday’s violence compounds the political crisis engulfing the city’s pro-Beijing leadership who are seemingly unable, or unwilling, to end the chaos.

Semi-autonomous Hong Kong has been plunged into its worst crisis in recent history after millions of demonstrators took to the streets and sporadic violent confrontations erupted between police and pockets of hardcore protesters.

The demonstrations over the last seven weeks were triggered by a controversial bill which would have allowed extraditions to mainland China, but have evolved into a call for wider democratic reforms and a halt to sliding freedoms.

Yet the unprecedented protests with huge turnouts – as well as frequent clashes and the sacking of parliament – have had little luck persuading Beijing or Hong Kong’s leaders.

Beijing has issued increasingly shrill condemnations in the last two weeks, but has left it to the city’s government to deal with the situation.

City leader Carrie Lam has shown no sign of backing down beyond agreeing to suspend the extradition bill.

Her administration has faced down weeks of public anger and she has made few public appearances beyond visiting injured officers and holding a handful of press conferences.

Pro-democracy lawmaker Claudia Mo said the city was now trapped in a “vicious cycle” where huge peaceful marches that have been ignored by the government end with violence between police and small groups of hardcore protesters.

“You see force being escalated on both sides but then this is a huge imbalance because the police are in possession of deadly weapons. This sums up Hong Kong today,” she told Agence France Presse.

Tensions were significantly raised after last weekend’s attack by a pro-government mob in Yuen Long.

The town is in Hong Kong’s rural New Territories where many of the surrounding villages are known for triad connections and their staunch support for the pro-Beijing establishment.

That brazen assault resulted in at least 45 people being taken to hospital. Police were heavily criticised for being too slow to respond to the violence, fuelling accusations of collusion or turning a blind eye to the pro-government mob – allegations the force has denied.

In a rare move, police banned Saturday’s rally saying they feared reprisal attacks against villagers from protesters, a decision that only heightened anger towards a force already perceived to be protecting pro-government aggressors.

Tens of thousands of people defied the ban on Saturday and began a peaceful rally. (READ: High points of Hong Kong’s huge protests)

But small groups of more hardcore protesters, many in helmets and carrying shields, confronted police outside the villages and accused them of protecting triads.

Tensions quickly rose and a now-familiar pattern of running battles between police and protesters began.

Police on Sunday said 13 arrests were made in Yuen Long.

Among them was Max Chung, a young activist who had initially applied for permission to hold the Yuen Long protest. He was arrested for inciting an illegal assembly.

Hospital authorities said 24 people were injured, most of whom have been discharged but with two remaining in a serious condition. – Rappler.com