Clashes in Hong Kong after police charge protesters with rioting

Jul 31, 2019 12:05 AM PHT
Agence France-Presse
Facebook Twitter Copy URL
Copied
Hundreds are protesting after police announced that 44 people arrested in clashes on Sunday, July 28, have been charged with rioting 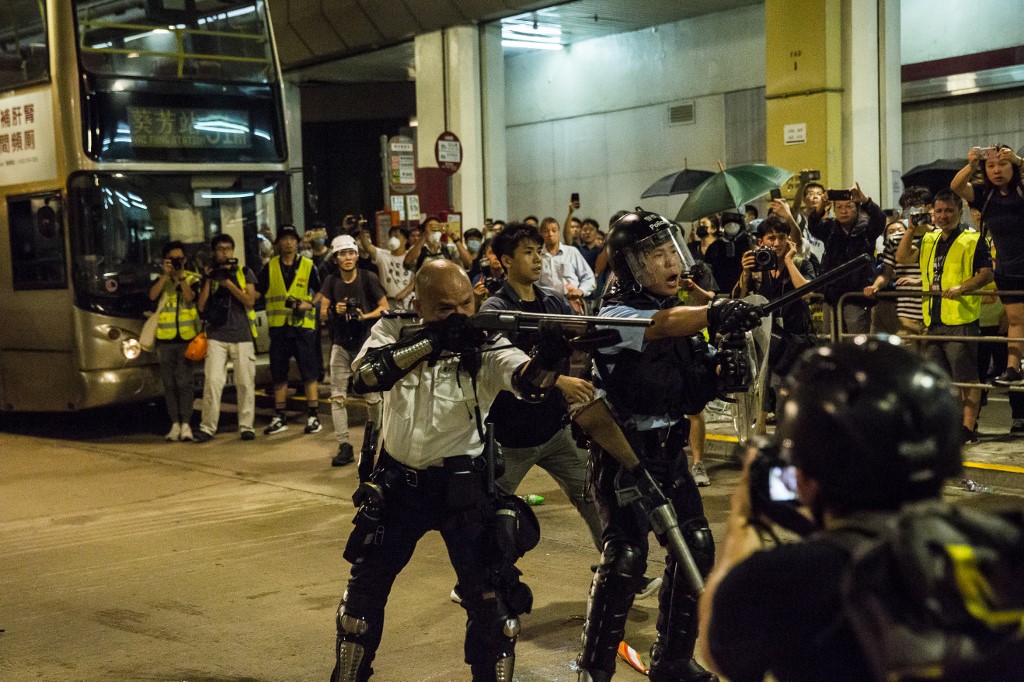 HONG KONG – Renewed clashes broke out between pro-democracy protesters and police in Hong Kong on Tuesday night after dozens of demonstrators were charged with rioting – an offence that carries a jail term of up to ten years.

The city is reeling from 7 weeks of mass protest rallies – some of which have ended in violence – triggered by a controversial bill which would have allowed extraditions to mainland China.

They have evolved into calls for wider democratic reforms and a halt to sliding freedoms in the most significant challenge to Beijing’s rule since the city’s 1997 handover.

In the latest flashpoint police used pepper spray and batons on Tuesday night against protesters who had gathered outside a police station in Kwai Chung district, an Agence France-Presse (AFP) reporter on scene said.

Hundreds were protesting after police announced 44 people arrested in clashes on Sunday had been charged with rioting.

Protesters responded to the police charge by throwing plastic bottles and umbrellas.

In footage broadcast live on Now TV an officer could be seen aiming a shotgun at protesters throwing objects at him in a nearby bus station until he and his colleagues beat a hasty retreat.

The last two weekends have seen a dramatic surge in the level of violence used by both protesters and police who have repeatedly fired rubber bullets and tear gas to disperse projectile-throwing crowds.

Tuesday night’s violence was brief and less pronounced in comparison but tensions remained high with the police charge having little effect in dispersing the crowds.

Before the clashes broke out, the crowds were chanting democracy slogans and spraying graffiti on the building’s walls. The police station had metal shutters pulled down over the door and all public-facing windows.

Rioting is one of the most serious public order offenses on Hong Kong’s statute books and carries a sentence of up to a decade in jail.

Edward Leung, a prominent activist, was jailed for 6 years last year after he was found guilty of rioting in clashes with police in 2016.

The move to charge the 44 protesters came a day after Beijing publicly threw its weight behind Hong Kong’s unelected leader Carrie Lam and the police, saying violent protesters must be swiftly punished.

Yang blamed the violence on a “few radicals” and said it “bumped into the bottom line” of the “one country, two systems” principle that governs the financial hub.

Beijing has issued increasingly shrill condemnations of the protests, but has left it to the city’s government to deal with the situation.

Lam has shown no sign of backing down beyond agreeing to suspend the extradition bill and has made few public appearances.

Police have not released a detailed breakdown of arrests and charges since the protests began but an AFP tally of public statements shows at least 170 people have been arrested since 9 June.

Protesters have vowed to keep their campaign going until their core demands are met.

They include the resignation of Lam, an independent inquiry into police tactics, an amnesty for those arrested, a permanent withdrawal of the bill and the right to elect their leaders.

On Tuesday morning, activists held up trains on the city’s subway system during the morning rush hour, leading to lengthy delays and long queues for buses.

It was not the first time they have used those tactics, but the disruption was more widespread than previously.

Under the 1997 handover deal with Britain, China promised to allow Hong Kong to keep key liberties such as its independent judiciary and freedom of speech.

But many say those provisions are already being curtailed, citing the disappearance into mainland custody of dissident booksellers, the disqualification of prominent politicians and the jailing of pro-democracy protest leaders.

Public anger has been compounded by rising inequality, the high costs of living and the perception that the city’s distinct language and culture are being threatened by ever closer integration with the Chinese mainland. – Rappler.com