Jul 31, 2019 1:29 PM PHT
Agence France-Presse
Facebook Twitter Copy URL
Copied
The announcement on Tuesday night that 44 people had been charged with rioting immediately triggers another round of clashes between police and protesters 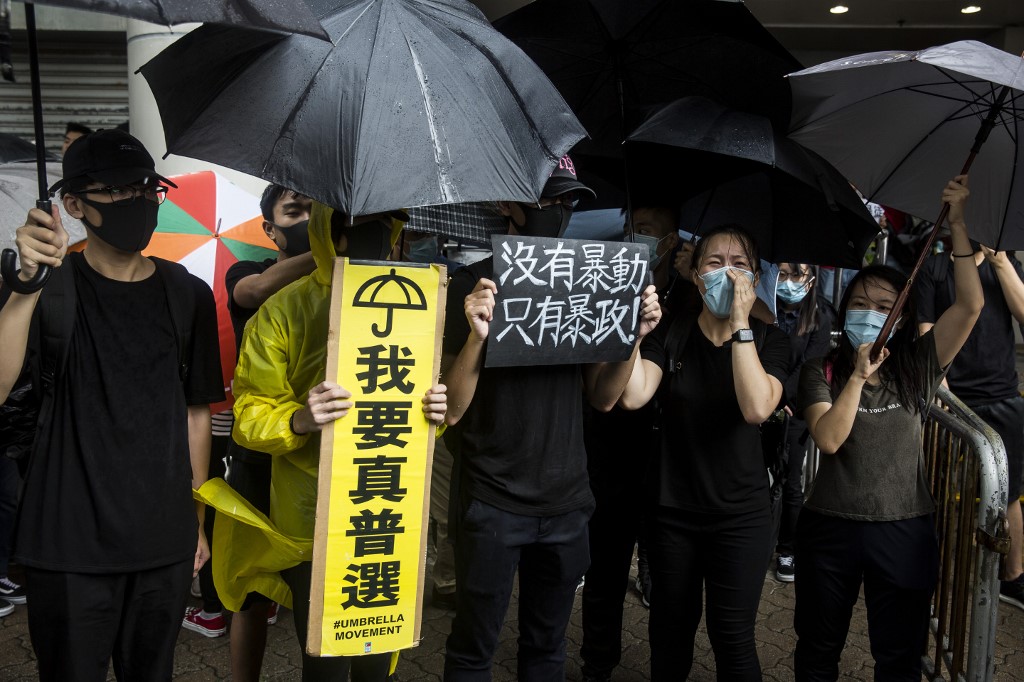 HONG KONG –  Dozens of Hong Kong pro-democracy protesters appeared in court Wednesday, July 31, after being charged with rioting, setting the stage for further unrest in a weeks-long crisis that has rocked the global financial hub.

The announcement on Tuesday night that 44 people had been charged with rioting – an offense that carries a jail term of up to 10 years – immediately triggered another round of clashes between police and protesters.

Supporters continued to voice their outrage on Wednesday morning as they stood outside court, braving heavy winds and rain, before the proceedings started.

“Release the righteous… no rioters, only tyranny… reclaim Hong Kong, the revolution of our times,” they chanted.

The protesters were generally calm as they took turns to appear in front of the judge, who formally read the charges and granted bail.

Semi-autonomous Hong Kong has endured more than seven weeks of unrest that began with a government bid to introduce a law that would have allowed extraditions to mainland China.

The protests evolved into a movement for deeper democratic reforms and an end to eroding freedoms, in the most significant challenge to Beijing’s rule since the city’s handover from Britain in 1997.

In the latest confrontation, police used pepper spray and batons against hundreds of protesters who had gathered outside a police station in solidarity with those who had just been charged.

Footage broadcast live on television showed an officer aiming a shotgun at protesters who were throwing objects at him.

The previous two weekends had seen a surge in the level of violence used by both protesters and police, who repeatedly fired rubber bullets and tear gas to disperse projectile-throwing crowds.

The 44 protesters were charged for their alleged role in running battles between police and protesters in a well-heeled residential neighbourhood on the main island on Sunday.

The range of their professions and ages reflected the wide support the pro-democracy movement enjoys.

They included a student, a teacher, a nurse, an airline pilot, a barber, a chef, an electrician, a construction worker and an unemployed person, according to their charge sheets.

Police had earlier said a total of 49 people, aged between 16 and 41, had been arrested over Sunday’s arrest.

The move to charge protesters with rioting came a day after Beijing publicly threw its weight behind Hong Kong’s unelected leader Carrie Lam and the police, saying violent protesters must be swiftly punished.

But while Beijing has issued increasingly shrill condemnations of the protests, it has left the city’s government to deal with the situation.

Lam has shown no sign of backing down beyond agreeing to suspend the extradition bill, and has made few public appearances.

Protesters have vowed to keep their campaign going until their core demands are met.

They include Lam’s resignation, an independent inquiry into police tactics, an amnesty for those arrested, a permanent withdrawal of the bill and the right to elect their leaders.

Under the terms of the 1997 handover deal from British to Chinese rule, Hong Kong enjoys rights and liberties unseen on the mainland, including an independent judiciary and freedom of speech.

Public anger has been compounded by rising inequality, the high costs of living and the perception that the city’s distinct language and culture are being threatened by ever closer integration with the Chinese mainland.  – Rappler.com