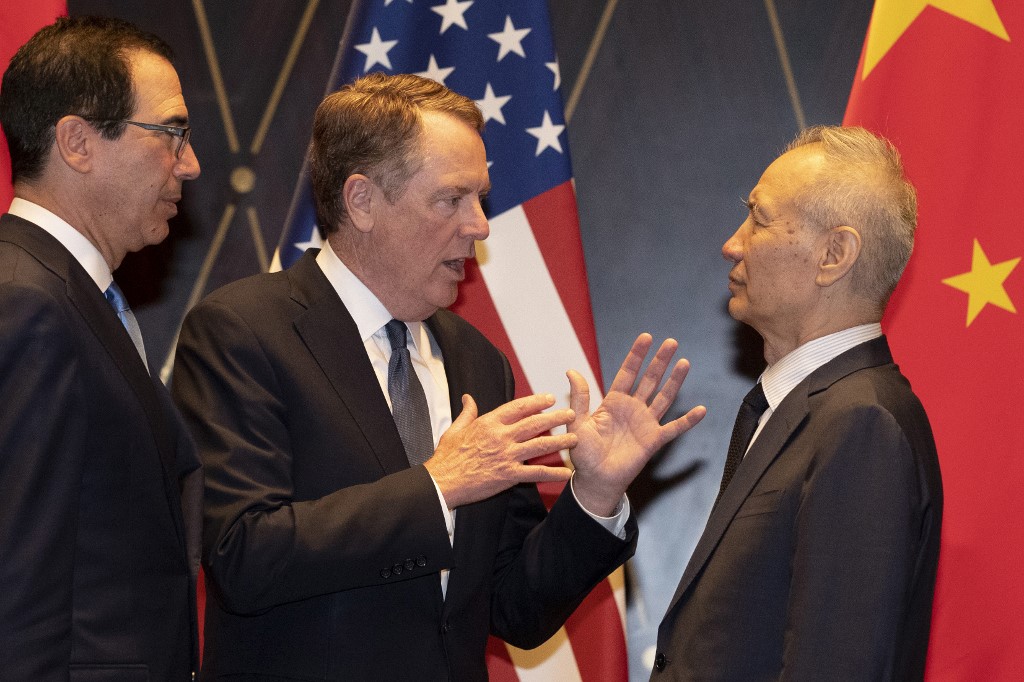 SHANGHAI, China (3rd UPDATE)  – US and Chinese negotiators agreed to meet again in the United States in September after holding “frank” and “constructive” talks in Shanghai on Wednesday, July 31, state media said following meetings overshadowed by a Twitter tirade from President Donald Trump.

US Treasury Secretary Steven Mnuchin and Trade Representative Robert Lighthizer met with Vice Premier Liu He in the Chinese financial hub for the first face-to-face negotiations since a trade war truce was declared last month.

“The two sides conducted frank, highly efficient and constructive in-depth exchanges on major issues of common interest in the economic and trade field,” according to the official Xinhua news agency, adding that the purchase of US agricultural goods by China was discussed.

The White House likewise called the talks “constructive” and said Wednesday that Chinese officials “confirmed their commitment” to buy more US farm exports, which would offer some relief to the American industry badly battered in the trade conflict.

The White House statement said the two sides also discussed central US grievances, including intellectual property rights and trade barriers other than tariffs.

“The meetings were constructive and we expect negotiations on an enforceable trade deal to continue” in Washington in early September, the statement said.

Washington and Beijing have so far hit each other with punitive tariffs covering more than $360 billion in two-way trade in a row focused on demands for China to curb the alleged theft of American technology and provide a level playing field to US companies.

The negotiators shook hands and exchanged pleasantries when they met Wednesday morning and then held talks for around 4 hours behind closed doors.

The talks were relatively brief and the negotiators emerged a little earlier than expected, for a group photo before the US trade officials left for the airport without speaking to reporters.

Talks had broken down in May after Trump accused China of reneging on its commitments, but the US leader and President Xi Jinping agreed to a truce in June.

Lighthizer and Mnuchin had arrived Tuesday, July 30, and joined Chinese officials for dinner and informal discussions – just as Trump lambasted the Chinese side on Twitter, saying “they always change the deal in the end to their benefit.”

Trump said Beijing was supposed to start buying US agricultural products but had shown “no signs that they are doing so.”

Xinhua said Wednesday the negotiators discussed “the issue of China increasing its purchases of US agricultural products according to its domestic needs” and the US creating “favorable conditions for these purchases.”

Commerce Minister Zhong Shan, who is considered a tough negotiator and who has taken a more prominent role in the talks, was among the Chinese officials at the meeting.

Jake Parker, senior vice president at the US-China Business Council, said: “We are pleased the two sides agreed to move forward with agriculture purchases to provide some much needed relief to American farmers.”

“We hope the negotiators will continue to take a pragmatic and realistic approach to compromise and reach a conclusion that leads to greater market access for foreign companies, improves the protection and enforcement of intellectual property, and ultimately levels the playing field for foreign companies operating in the market,” Parker added.

‘Rip off the USA’

Hours after Trump’s tweets, a commentary in the Communist Party mouthpiece People’s Daily on Wednesday complained that as the talks started, “the drums of some Americans struck again on the side, disturbing the main melody.”

At a press briefing in Beijing, a foreign ministry spokeswoman made it clear which side China saw as responsible for the trade impasse.

“When one is ill it is useless to ask someone else to take the medicine,” said Hua Chunying, when asked about the talks wrapping up in Shanghai.

“I believe the US should show more sincerity and good faith when it comes to trade negotiations.”

Expectations were already low before the talks, and officials on both sides were keeping a low profile throughout their Shanghai trip.

US trade negotiators entered and left their hotel on Shanghai’s waterfront through side doors without going through public areas, and did not stop to speak to press or show their faces.

Trump suggested Tuesday that Beijing was hoping to delay a deal until after the US presidential elections in November 2020, saying China wanted to see if a Democratic opponent wins the vote so it could “continue to rip off the USA.”

But Trump also warned that “if & when I win, the deal that they get will be much tougher than what we are negotiating now…or no deal at all.”

Trade experts also view a deal as unlikely before the 2020 elections.

“He (Trump) can’t afford politically to step up and say ‘I made a great deal with China’ when it’s not a great deal,” said Derek M. Scissors, resident scholar at the American Enterprise Institute.

“So the most likely outcome is we get nothing until the election.” – Rappler.com