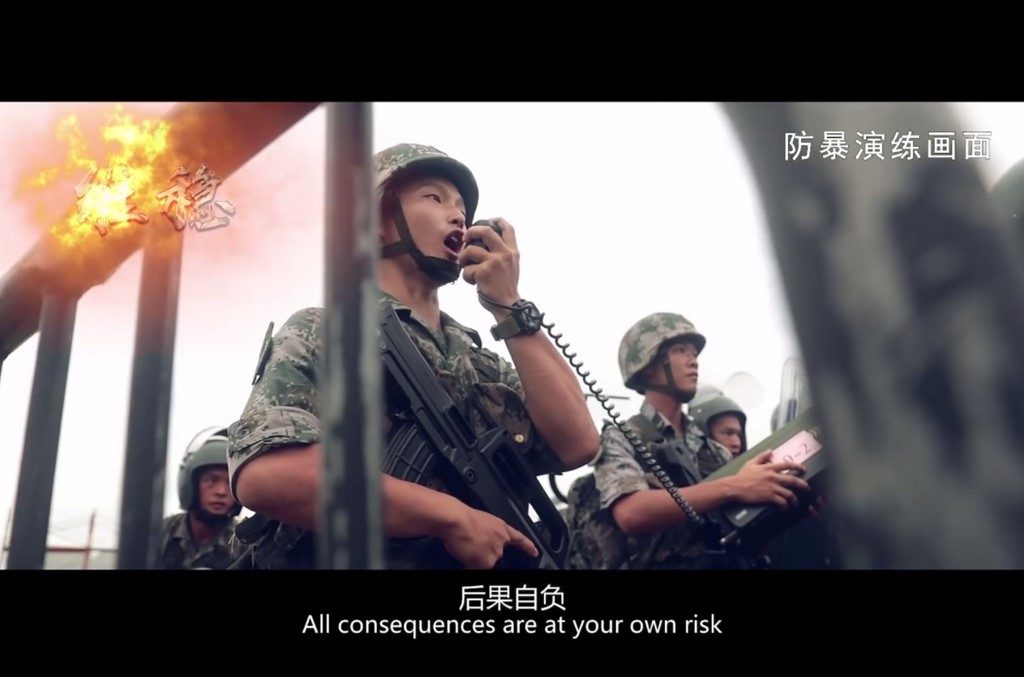 HONG KONG, China – US President Donald Trump said Thursday, August 1, he would be taking a hands-off approach towards unrest in Hong Kong as China flexed its military muscle in a sign of growing frustration over weeks of pro-democracy rallies in the former British colony.

The semi-autonomous southern Chinese city has endured two months of protests that began with a government bid to introduce a law that would have allowed extraditions to mainland China.

The demonstrations evolved into a movement for deeper democratic reforms and an end to eroding freedoms, in the most significant challenge to Beijing’s rule since the city’s handover from Britain in 1997.

Authorities have shown no sign of backing down, and China’s military on Wednesday released a propaganda video showing a drill in which armed troops quell a protest in Hong Kong.

Beijing is celebrating Armed Forces Day in a most uncivilized fashion. The people of #HongKong are gifted a video of vile threats! The PLA is supposed to protect the people, not pound them into submission. It's time for authoritarian China to back off! JW https://t.co/L2q4PCblSd pic.twitter.com/PJ0nqG3xLJ

The commander of the army’s city garrison said he was determined to maintain law and order.

It was the strongest public intervention yet from China’s armed forces but, questioned Thursday about the crisis, US President Donald Trump passed up opportunity to support the pro-democracy movement.

Chinese People's Liberation Army (PLA) Hong Kong Garrison is an important symbol of China's sovereignty over Hong Kong. How does it fulfill its mission? Find out here as we celebrate Army Day in China! #HongKong #PLA #ArmyDay pic.twitter.com/remDQJzgzs

“All consequences are at your own risk,” a soldier yells into a loudspeaker at the start of the drill in Cantonese, the language spoken in Hong Kong rather than the Mandarin of mainland China.

The video was released on the same day dozens of demonstrators appeared in court to face charges of “rioting” over their alleged involvement in a weekend protest.

Chen Daoxiang, the commander of PLA’s Hong Kong garrison, spoke of the need to maintain order in rare public comments at a late Wednesday, July 31, reception.

“We firmly support the action to maintain Hong Kong’s rule of law by the people who love the nation and the city, and we are determined to protect the national sovereignty, security, stability and the prosperity of Hong Kong,” he said.

Thousands of PLA troops have been based at the Hong Kong garrison since the handover from Britain in 1997, but they generally keep a low profile.

Under the terms of the handover deal, Hong Kong residents enjoy rights and liberties unseen on the mainland, including an independent judiciary and freedom of speech.

But many say those rights are being curtailed.

Meanwhile Hong Kong is braced for a civil servants’ rally planned for Friday night, August 2, pro-democracy demos during the weekend and a city-wide strike on Monday, August 5.

Braving heavy rain on Thursday, workers from around 80 banks gathered in the financial district and more than 700 workers posted photos of their staff cards to declare they would also join Monday’s action, organizers on the messaging app Telegram said.

Demonstrators said they were angered by alleged cooperation between police and gangsters last month, when a gang of suspected triad members armed with clubs attacked anti-government protesters and bystanders in Yuen Long, a border town near the mainland.

Demonstrators said police reacted too slowly to the incident, and were too lenient with the thugs.

“There is too much evidence that leads to police-triad collusion,” KS Wong, who works at HSBC retail banking, told AFP. – Rappler.com