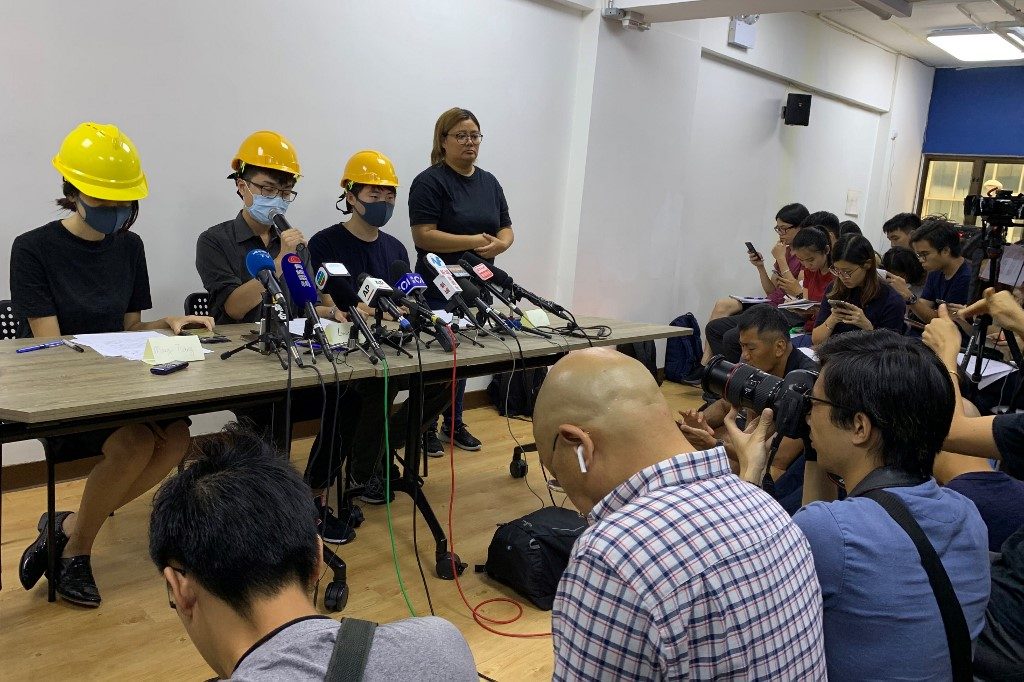 Facebook Twitter Copy URL
Copied
Dressed in the movement's signature yellow construction helmets and hiding their identities with face masks, the two young men and one woman bill their gathering as a civilian press conference 'by the people, for the people'

Dressed in the movement’s signature yellow construction helmets and hiding their identities with face masks, the two young men and one woman billed their gathering as a civilian press conference “by the people, for the people”.

“We call on the government to return the power back to the people and to address the demands of Hong Kong citizens,” they said as they read out their statements in both English and Cantonese.

The semi-autonomous southern Chinese city has been wracked by two months of protests and clashes between police and increasingly hardcore demonstrators in the biggest threat to Beijing’s rule since its 1997 handover from Britain.

But the protests are largely leaderless and organized online through social media and messaging apps.

Tuesday’s appearance was the first time people from within the movement have delivered a statement in a formal setting.

“This platform aims to act as a counterweight to the government’s monopoly on the political discourse on this issue,” they said, adding they were not affiliated with any political party or group.

The event came a day after a general strike caused widespread travel disruption and saw clashes in a dozen different locations across the international finance hub.

In a statement on Monday, Hong Kong’s government condemned the latest protests.

“The incrementally spreading and rapidly escalating violence is outrageous, and is pushing Hong Kong to the verge of a very dangerous situation,” the statement said.

But the 3 protesters hit back.

“The current administration should be responsible for the public outcry but they have chosen to stay away from the responsibility,” one said in English. “Such disgraceful behavior should be condemned.”

They criticized the city’s police force which they accused of showing a “total loss of self-discipline… and their incompetence in carrying out their lawful duties.”

And they also reiterated the movement’s calls for greater democratic freedoms in a city where the leader is chosen by a pro-Beijing committee.

“The pursuit of democracy, liberty and equality is an inalienable right of every citizen. We therefore call on the government to refrain from exterminating our right to pursue these universal values,” they said.

But many say those rights are being curtailed.

Protesters are demanding the resignation of city leader Carrie Lam, an independent inquiry into police tactics, an amnesty for those arrested, a permanent withdrawal of a reviled extradition bill, and the right to elect their leaders. – Rappler.com