El Paso residents tell Trump to stay away after shooting 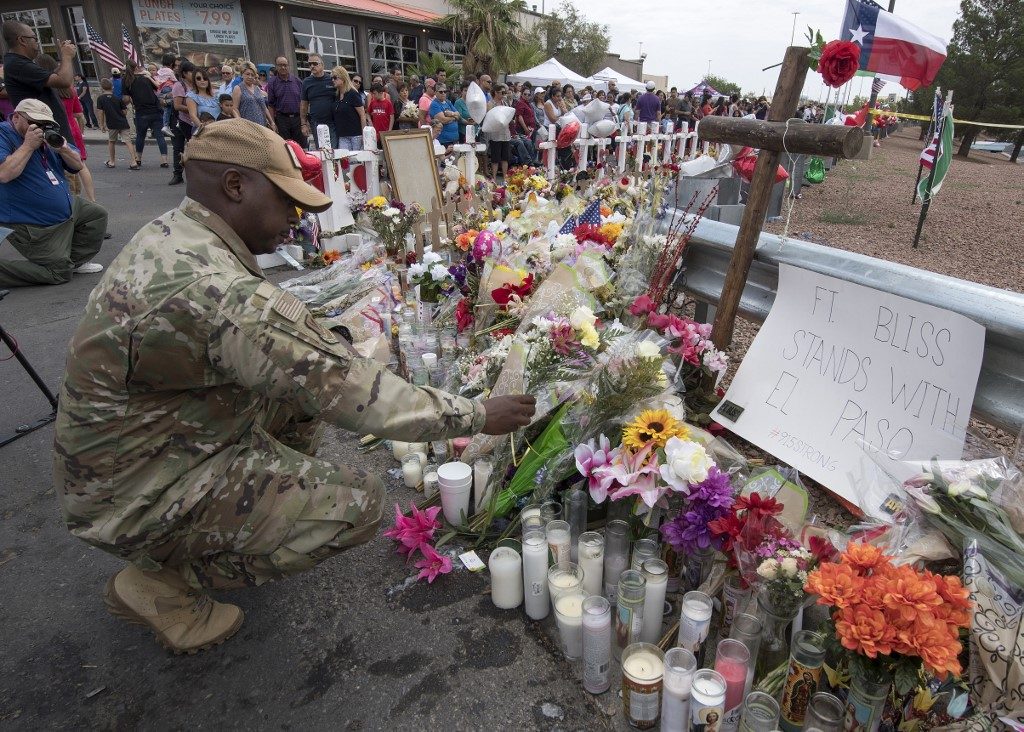 EL PASO, USA – Residents in majority-Hispanic El Paso told US President Donald Trump Tuesday, August 6, to stay away amid fury over his anti-immigration rhetoric as he struggles to unite the country in the wake of back-to-back mass shootings that killed 31 people.

Trump is scheduled to stop off in the Texan border city where 22 died in a weekend gun massacre on Wednesday, August 7, after first visiting Dayton, Ohio, where another gunman shot nine dead.

The president called on Americans in a nationwide address Monday, August 5, to condemn bigotry – but community leaders say his words rang hollow set against a longstanding refusal to call out white supremacy and a history of tweets widely condemned as racist.

“This president, who helped create the hatred that made Saturday’s tragedy possible, should not come to El Paso,” tweeted Beto O’Rourke, a Democratic presidential hopeful and former congressman who grew up in the city.

“We do not need more division. We need to heal. He has no place here.”

Before opening fire at a Walmart superstore in El Paso, the 21-year-old suspected gunman, who is white and from the Dallas area, reportedly posted an online manifesto railing against a “Hispanic invasion of Texas.”

Critics pointed out that the language echoed much of Trump’s rhetoric on Twitter and at rallies, where he has frequently framed Hispanic migrants as part of an “invasion.”

Trump has also characterized Mexicans and Central Americans as criminals, gang members and rapists, and described the communities of African American lawmakers on several occasions as “infested” with crime and filth.

Congresswoman Veronica Escobar, whose district includes the area targeted by the El Paso gunman, urged Trump “to consider the fact that his words and his actions have played a role in this.”

“From my perspective, he is not welcome here,” Escobar told MSNBC. “He should not come here while we are in mourning.”

Presidential advisor Kellyanne Conway accused Democrats of politicizing a moment of acute pain while Trump was trying to “bring the country together, heal a nation.”

She was backed by the chairman of the El Paso County Republican Party, Adolpho Telles, who defended Trump’s visit but told CNN he needs to be more careful about his language.

In his nationwide address, Trump spoke out against racism but blamed mental illness, video games and the internet for fueling gun violence, sidestepping the fact that other countries with these issues do not have mass shootings.

He had nothing substantial to say about gun control measures, drawing expressions of disappointment from those hoping for a healing moment.

“I think, watching the president over the past few years on the issue of guns… I don’t know if he knows what he believes, frankly.”

‘He has no right’

Residents in El Paso, unimpressed by Trump’s tightly scripted appeal for unity, told AFP they were fearful of a rise in white nationalism and said the president was part of the problem.

“I do blame our president. Since the moment he got into office the rhetoric, the hate that he’s got towards people that are just different color skin, he has no right,” said Silvia Rios.

Adding to the backlash, Washington-based non-profit the Center for Public Integrity questioned Trump’s self-professed “unfailing support” to El Paso, pointing to $570,000 in unpaid police and public safety-related bills it said he owed the city dating back to a campaign visit in February.

The president began Tuesday apparently irritated by veiled criticism from former president Barack Obama, who called on Americans to “soundly reject language coming out of the mouths of any of our leaders that feeds a climate of fear and hatred.”

Trump responded with a tweeted quote from Fox News anchor Brian Kilmeade, who said Obama had seen 32 mass shootings during his presidency, yet “not many people said Obama is out of control.”

Legislation to overhaul gun control under Obama failed in 2013 when the Republican-controlled Senate rejected a ban of assault-style weapons and expanding background checks.

He told the BBC that gun control was “the one area where I feel that I’ve been most frustrated and most stymied.” – Rappler.com