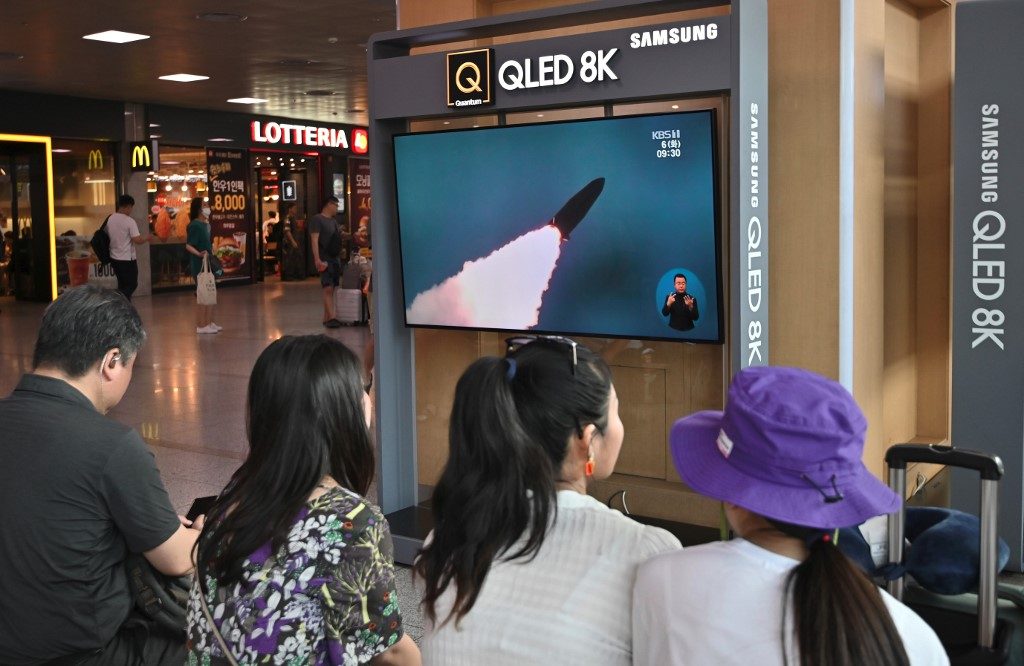 Trump said he had received a “beautiful letter” from Kim expressing Pyongyang’s anger over the joint war games, which spurred the series of tests of extremely fast, short-range guided missiles.

But hours after Trump said he foresaw having another meeting with Kim, South Korea’s Joint Chiefs of Staff said North Korea fired two more apparent rockets into the East Sea, or Sea of Japan.

It was the 5th round of missile launches in two weeks, and came just days after US and South Korean forces began their defense readiness exercises, which Kim’s government has said are a “flagrant violation” of the diplomatic process between Pyongyang, Washington and Seoul.

The newest launch came after Trump strained to keep the door open for denuclearization negotiations with Kim after months in which no progress has been made.

While other US officials have called the launches “provocations,” Trump said he agreed with the North Korean leader and was hoping to meet him again, with talks having been frozen for months.

“I got a very beautiful letter from Kim Jong Un yesterday,” Trump said. “It was a very positive letter.”

“He wasn’t happy with the war games,” Trump said, referring to the US-South Korean military exercises.

“As you know, I’ve never liked it either. I’ve never been a fan. And you know why? I don’t like paying for it.”

Hours later, the White House had no immediate comment on the newest rocket tests.

“We are aware of reports of a missile launch from North Korea, and we continue to monitor the situation. We are consulting closely with our Japanese and South Korean allies,” a senior administration official told Agence France-Presse.

Trump has appeared determined to secure a denuclearization agreement with North Korea ahead of the November 2020 US presidential elections, despite faltering talks since he first met Kim in a historic ice-breaking summit in Singapore in June 2018.

At the time, the US temporarily froze military exercises with South Korea and Trump claimed Kim had agreed to give up his newly-acquired nuclear weapons and long-range ballistic missiles.

But Pyongyang has maintained that the United States must lift its economic embargo and sanctions on the country to make any progress in nuclear talks.

Yet even after their abortive second summit in Hanoi in February, Trump has been loath to criticize the North Korean leader.

In June he offered an olive branch by meeting Kim in the Panmunjon truce village on the North Korea-South Korea border, the first sitting US president ever to step inside the North.

And on Friday, he said the missile launches weren’t important.

“I’ll say it again. There have been no nuclear tests. The missile tests have all been short-range. No ballistic missile tests, no long-range missiles,” Trump said.

That contrasted with his tough words Friday for Washington’s key East Asia allies, who have been locked in a searing trade row.

“South Korea and Japan are fighting all the time,” he said. “They have to get along with each other. If they don’t get along, what are we doing?”

But others in the Trump administration sound less enthusiastic about Kim’s missiles.

After Pyongyang’s 4th launch early this week, Secretary of State Mike Pompeo said Washington was ready to resume talks, but that the target of the “full, final denuclearization of North Korea” had not changed.

A senior State Department official who refused to be named told journalists last week that the missile tests were an impediment to peace.

“The missile launches, any kind of provocations, are not helpful to advancing the cause of diplomacy,” the official said.

The official said there was a unified message going to the North Koreans from China and Russia that they need to “cease the provocations, reengage in diplomacy to achieve complete denuclearization.” – Rappler.com