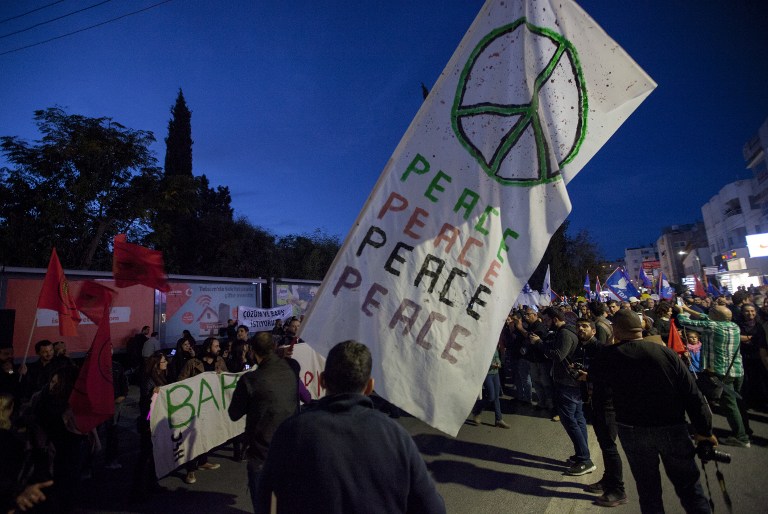 “The two leaders… decided to announce their readiness to hold a tripartite meeting with the secretary-general after the United Nations General Assembly (in September) in order to plan the way forward,” a UN statement said.

Cypriot President Nicos Anastasiades and Turkish Cypriot leader Mustafa Akinci held an informal 3-hour meeting on Friday in the UN compound in the buffer zone which divides the capital Nicosia.

The two leaders had a “sincere and constructive exchange of views,” the UN said, but failed to make any breakthrough in reviving talks on ending the island’s 4 and a half decade division.

The new effort to revive peace negotiations, which collapsed in Switzerland in July 2017, was overshadowed by escalating tensions between the two sides over oil and gas exploration in the waters off the eastern Mediterranean island.

The two leaders agreed to continue engaging in the efforts undertaken by UN envoy Jane Holl Lute that “would enable structured and results-oriented negotiations leading to a settlement with a sense of urgency,” the UN said.

The statement marked little progress since the leaders’ last informal meeting in February with no mention of the dispute over offshore energy wealth.

Turkey and Cyprus both stepped up gas exploration and drilling efforts in late 2018.

Ankara and the island’s internationally recognized Greek Cypriot government Nicosia have been at odds over Turkish Cypriots’ share in gas revenues and Turkey’s territorial claims, which overlap with Cyprus’s exclusive economic zone (EEZ).

The two leaders simply reaffirmed their commitment to “improving the daily lives of all Cypriots and to implementing further confidence-building measures, with UN support”.

Ankara’s deployment of two ships – the Fatih and Yavuz – to search for oil and gas in waters designated as a Republic of Cyprus maritime zone has sparked a dispute, which has seen the EU impose sanctions against Turkey.

The offshore area where the vessels have been dispatched is part of what the international community recognizes as the EEZ of the Republic of Cyprus, which has invited energy giants like ExxonMobil, Italy’s Eni and France’s Total to drill for hydrocarbons.

Turkey opposes any offshore exploration which excludes the Turkish Cypriot part of the island led by Akinci.

Turkey says its actions abide by international law and that it is drilling inside its continental shelf.

But its decision to press on with drilling in the EEZ has drawn criticism from Egypt, Israel and the United States, as well as the European Union, of which Cyprus is a member.

Akinci proposed resolving the dispute by forming a committee to share hydrocarbon revenues but his plan was rejected by the Greek Cypriots.

The last talks aimed at reunifying the island as a bi-zonal, bi-communal federation collapsed in Switzerland after the UN chief failed to get the parties to agree on post-settlement security arrangements.

It was the first time Cyprus talks had involved the guarantor powers of Britain, Greece and Turkey but that raised hopes that have made their subsequent collapse harder to recover from.

Cyprus has been divided since 1974 when Turkish troops invaded and occupied its northern 3rd in response to a coup sponsored by the military junta then ruling Greece. – Rappler.com