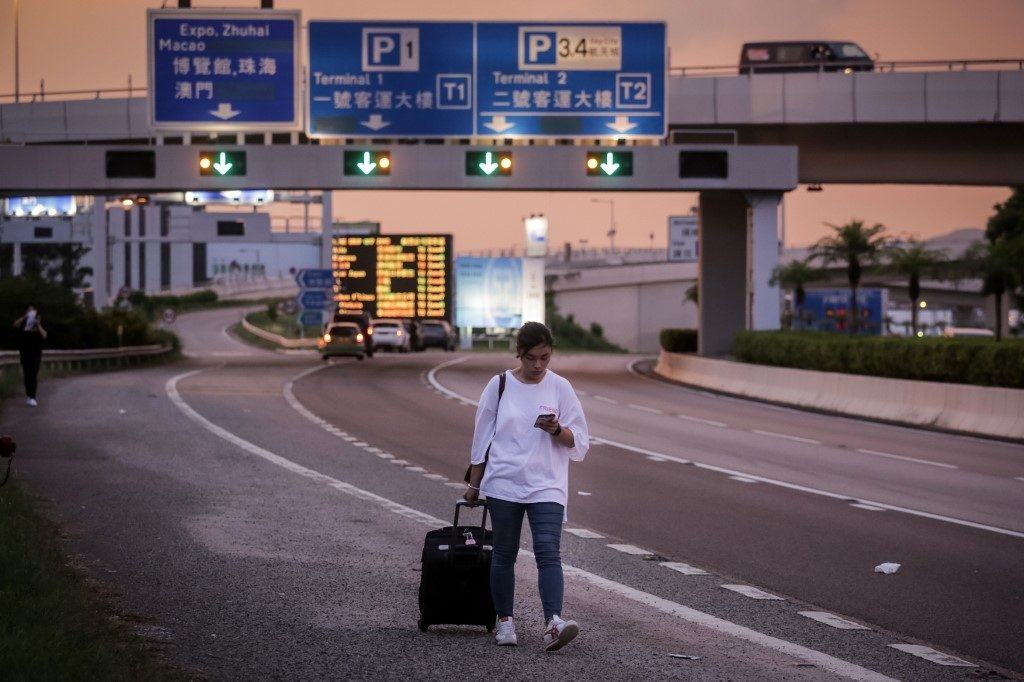 HONG KONG, China (3rd UPDATE) – Hong Kong airport re-opened on Tuesday, August 13, after a rally by thousands of pro-democracy protesters triggered an unprecedented shutdown, but hundreds of flights were still listed as cancelled.

The abrupt closure marked a new low in a 10-week crisis that has seen millions of people take to Hong Kong’s streets in the biggest challenge to Chinese rule of the semi-autonomous city since its 1997 handover from Britain.

The protests on Monday, August 12, were driven by anger over alleged police brutality, with demonstrators claiming one woman had lost an eye at a weekend rally and video showing tear gas being used against them in a subway station.

But the protests have led to rising anger from authorities in Beijing, who on Monday described some of the violent demonstrations as “terrorism”.

Early Tuesday, passengers with luggage were being checked in at the departures hall and information boards showed several flights were boarding or about to depart.

But the woes at the airport remained far from over, with a massive backlog of flights to clear and activists calling for another protest there on Tuesday afternoon.

In an advisory posted on its website at 6 am (2200 GMT Monday), Cathay said passengers urged customers to postpone non-essential travel from Hong Kong.

On Tuesday morning, only a handful of protesters remained in the airport.

It was unclear whether protesters, who have no clear leadership and organize via social media, would return to the airport in big numbers on Tuesday.

Nor was it clear whether authorities would allow them to protest.

Many of the posters and artwork the protesters had hung throughout the airport on Monday had been taken down, but graffiti – some reading “an eye for an eye” – could still be seen in several places.

The protesters adopted the slogan after a woman suffered a serious facial injury that reportedly caused her to lose the vision in one eye at a demonstration that turned violent on Sunday night.

The demonstrators have accused police of causing the injury by firing a bean-bag round, and cite the case as evidence of what they say has been an excessive and disproportionate response by police to their protests.

The protests began in opposition to a bill that would have allowed extraditions to the mainland, but quickly evolved into a broader bid to reverse a slide of rights and freedoms in the southern Chinese city.

But Lam has consistently ruled out meeting any of the protesters’ other demands, which include the right to choose their next leader and an independent inquiry into alleged police brutality.

The demonstrations have become increasingly violent from both sides, with police using tear gas and rubber bullets protesters sometimes hurling bricks and bottles.

“It is becoming more and more dangerous, but if we don’t still come out at this point, our future will become more frightening, and we will lose our freedoms,” a 22-year-old protester at the airport told AFP on Monday.

Authorities in Beijing on Monday slammed violent protesters who threw petrol bombs at police officers, linking them to “terrorism”.

“This wantonly tramples on Hong Kong’s rule of law and social order.”

And a commentary early Tuesday on China’s official Xinhua news agency spoke of “black-clad mobsters” and said Hong Kong’s future is at a “critical juncture”.

A senior official in the administration of US President Donald Trump on Monday urged “all sides” to avoid violence in Hong Kong.

“Societies are best served when diverse political views are respected and can be freely and peacefully expressed,” the official said on condition of anonymity. – Rappler.com