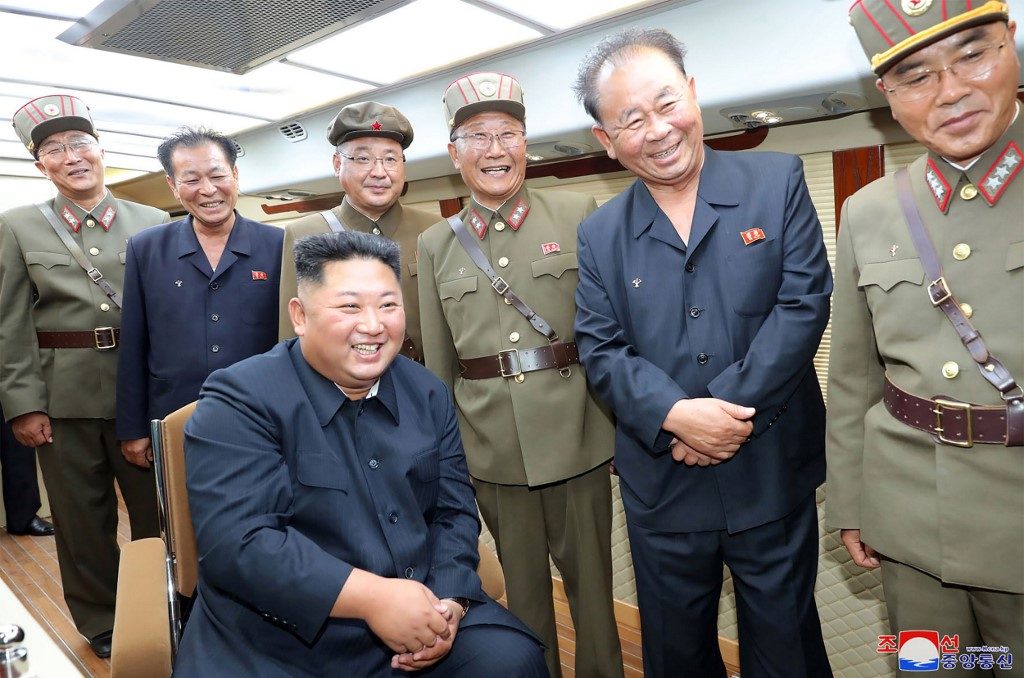 Facebook Twitter Copy URL
Copied
(UPDATED) The South Korean military says the projectiles were fired from near the city of Tongchon of Kangwon Province into the East Sea, also known as the Sea of Japan

It was the sixth round of launches in recent weeks in protest at ongoing joint military drills between Seoul and the US. North Korean leader Kim Jong-un has described the tests as a “solemn warning” to the South.

Pyongyang has routinely expressed anger at the war games, which it considers rehearsals for invasion, but in the past has avoided carrying out tests while the maneuvers are taking place.

The South Korean military said the projectiles were fired from near the city of Tongchon, and flew some 230 kilometers (140 miles) before falling into the Sea of Japan, which is also known as the East Sea.

They were “presumed to be short-range ballistic missiles,” an official of the Joint Chiefs of Staff told Agence France-Presse, while further analysis was required to confirm that.

The latest test came as the North’s Committee for the Peaceful Reunification of the Country said it rejected comments by Moon on Thursday, August 15, outlining his desire for unification, and said it had nothing more to discuss with the South.

It called Moon – who has long favored dialogue with the North – an “impudent guy rare to be found,” for hoping for a resumption of inter-Korean talks while continuing military drills with Washington.

In a speech on Thursday marking the anniversary of Korea’s liberation from Japan’s 1910-45 rule, Moon outlined a goal of “achieving peace and unification by 2045,” although his single five-year term ends in 2022.

“His speech deserves the comments ‘foolish commemorative speech’,” the North said in its statement.

“We have nothing to talk any more with the south Korean authorities nor have any idea to sit with them again,” it added.

Seoul’s Unification Ministry said the North’s comments are not “consistent” with the spirit of inter-Korean agreements, including the Panmunjeom Declaration signed by Moon and Kim in April last year.

“We want to clearly point out that (the comments) won’t help the improvement of inter-Korean relations at all,” a ministry official added.

The joint US-South Korea drills have been held for years but were scaled down to ease tensions with Pyongyang.

But the North threatened last week to carry out more weapons tests following the start of the latest joint drills between Seoul and Washington, which began on August 5.

Moon has played down the North’s recent tests, even suggesting potential inter-Korean economic projects as a way to tackle the South’s ongoing trade row with Japan, prompting critics to accuse him of having a “peace fantasy.”

Seoul has described most of the previous launches as short-range ballistic missiles, while Pyongyang has said some were a “large-caliber multiple-launch guided rocket system.”

The North is banned from ballistic missile launches under UN Security Council resolutions.

Seoul’s Joint Chiefs of Staff said the South was “monitoring the situation in case of additional launches while maintaining a readiness posture.”

The tests come as plans to resume working-level talks between the North and Washington appear to have stalled.

After a year of mutual threats and mounting tension, US President Donald Trump and Kim held a historic summit in Singapore last year, where both leaders signed a vague pledge to work towards “denuclearisation of the Korean peninsula.”

A second summit in Hanoi in February broke up amid disagreements over sanctions relief and concessions from the North.

The two leaders then agreed to resume nuclear talks during an impromptu June meeting in the Demilitarized Zone that divides the peninsula.

Pyongyang recently said nuclear talks would be “strictly” between the North and the US, refusing to hold separate dialogue with the South, having accused Seoul of posing as a “meddlesome mediator” following the collapse of the Hanoi summit.

South Korean authorities are “snooping about to fish in troubled waters in the future DPRK-US dialogue,” the North’s statement said Friday, “dreaming that the phase of dialogue would naturally arrive” once the joint Seoul-Washington military drills are over.

But Moon “had better drop that senseless lingering attachment,” it said. – Rappler.com