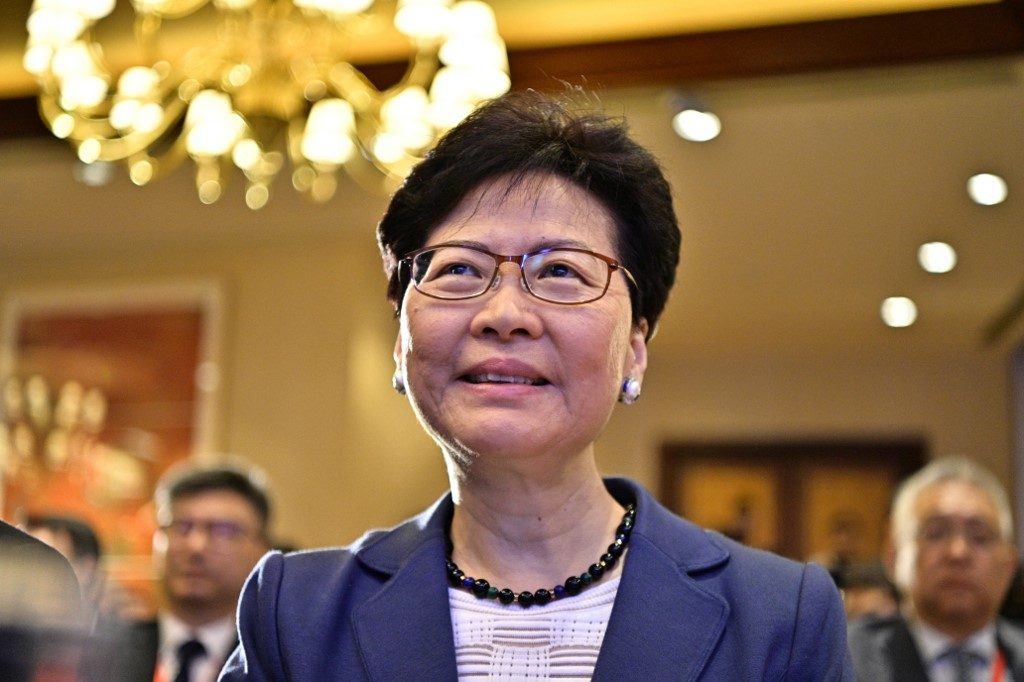 Facebook Twitter Copy URL
Copied
'I wholeheartedly hope that this is the beginning of society returning to calm and staying away from violence,' Carrie Lam says

HONG KONG – Hong Kong’s embattled leader Carrie Lam on Tuesday, August 20, said she hoped “calm” will prevail after a massive weekend march passed without clashes between police and demonstrators, but again refused to give ground to protester demands.

Hundreds of thousands of people marched through the heart of the city on Sunday, August 18, in a show of peaceful protest after escalating street battles with police drew stark warnings from Beijing and threatened to undermine public support.

“On Sunday, many Hong Kong residents participated in a rally at Victoria Park that was largely peaceful,” Chief Executive Carrie Lam said at a televised press conference.

“I wholeheartedly hope that this is the beginning of society returning to calm and staying away from violence.”

The protests began against a proposed extradition law to China but morphed into a pro-democracy movement sparking the city’s biggest political crisis in decades.

They have been fuelled by anger over alleged police brutality, with tear gas and rubber bullets deployed against protesters.

Lam reported 174 complaints have been made against police since protests began.

She said they would be “robustly” investigated by the Independent Police Complaints Council, whose head is appointed by the chief executive.

However, the probe is unlikely to satisfy protesters who have called for an independent inquiry by an external body.

In addition to universal suffrage and cancelling the extradition bill, protesters also demand the release of those detained during clashes.

Lam, pilloried by press and protesters for failing to step down while the city plunges into crisis, said her government would continue a “fact-finding mission” on how to move forward from the demonstrations.

She took a softer tone than in recent weeks, but again refused to formally withdraw the contentious extradition bill, repeating only that: “The bill is dead. There’s no plan to revive this bill.”

The chaos has caused mounting concerns for business and investment in Hong Kong, with the effects of the trouble particularly impacting the tourism industry.

“One of its most important strengths is the rule of law,” Lam said of the financial hub.

“That’s why we have been doing so much to ensure that the rule of law is being upheld and respected in Hong Kong.” – Rappler.com