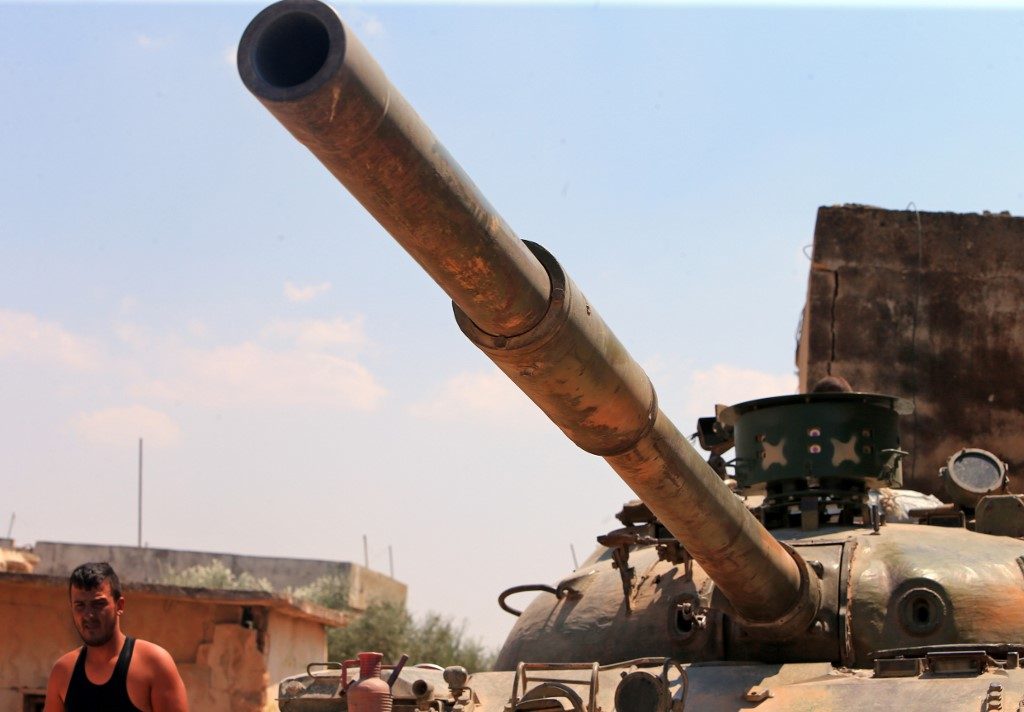 Facebook Twitter Copy URL
Copied
After 8 years of civil war, the Idlib region on the border with Turkey is the last major stronghold of opposition to Assad's Russia-backed government

Turkey warned Damascus “not to play with fire” after the advance saw government fighters almost encircle a patch of countryside including an important Turkish monitoring post.

After 8 years of civil war, the Idlib region on the border with Turkey is the last major stronghold of opposition to Assad’s Russia-backed government.

Since January, it has been administered by the Hayat Tahrir al-Sham alliance, which is led by jihadists from Syria’s former Al-Qaeda affiliate.

The region of some 3 million people was supposed to be protected by a buffer zone deal signed last September by Moscow and rebel backer Ankara, but government and Russian forces have subjected it to heavy bombardment since late April, killing more than 880 civilians.

And in recent weeks, regime forces have inched forward at the southern edges of the bastion.

In the early hours of Tuesday, anti-Assad fighters pulled back from the town of Khan Sheikhun and the countryside to its south, said the Britain-based Syrian Observatory for Human Rights monitor.

The withdrawal means a Turkish observation point in the nearby town of Morek, as well as a string of surrounding villages, are effectively surrounded by government forces, Observatory chief Rami Abdel Rahman told AFP.

All roads leading out of the area are either controlled by government forces or within range of their guns, he said.

Also Tuesday, 12 civilians including 3 children were killed in raids in several locations in southeast Idlib, the Observatory said.

Among the casualties, 9 of them perished in Russian strikes, it added.

Turkey’s Foreign Minister Mevlut Cavusoglu said his country had no intention of removing the post from Morek.

“We will do whatever is necessary to ensure the security of our soldiers and observation posts,” he said.

An HTS spokesman, meanwhile, denied its forces had withdrawn from the countryside around Morek, adding they had regrouped in the south of Khan Sheikhun after heavy bombardment.

Another coalition of pro-Turkey rebel groups, the National Liberation Front, also denied in a statement the “rumors” concerning a retreat, saying it was a tactical “redeployment” in order to “pursue the resistance.”

Moscow claimed rebel attacks against a key Russian air base to the west of Idlib and on regime-held civilian areas had continued despite the presence of the Turkish posts.

“We have warned our Turkish colleagues that we would respond,” Russian Foreign Minister Sergei Lavrov said.

Assad also hit out at Turkey in a statement, saying “the latest battles in Idlib uncovered… Ankara’s clear and unlimited support for terrorists”, using his term for both jihadists and rebels.

Khan Sheikhun lies on the highway connecting Damascus to second city Aleppo, which has long been a key government objective.

On Monday, August 19, a Turkish military convoy crossed the border into Idlib and headed south along the highway, drawing condemnation from Damascus.

Ankara alleged an air strike had targeted its troops, while a Syrian pro-government newspaper said regime aircraft had targeted a rebel vehicle leading them.

Analyst Samuel Ramani said the government’s accusation that Turkey was supporting its opponents could provide a “pretext for further Syrian army incursions”.

But “for Russia, holding the Astana coalition together is a chief priority,” he said.

On Tuesday, the convoy was at a standstill just north of Khan Sheikhun, after government forces to the south cut the road into the town the previous day.

Air raids continued on areas north of Khan Sheikhun on Tuesday, including in the town of Binin where the AFP reporter saw a man pulled from the rubble alive.

The war has killed more than 370,000 people since it started with the brutal repression of anti-government protests in 2011.

Successive rounds of UN-backed peace talks have failed to stem the bloodshed, and in recent years have been overshadowed by a parallel negotiations track led by Russia and Turkey, dubbed the Astana process.

Under the September deal, Turkish troops were to monitor a planned buffer zone around Idlib after jihadists had withdrawn from it — but that pullout failed to materialise.

The International Committee of the Red Cross warned Tuesday that a “humanitarian disaster” was unfolding in Idlib.

“Further escalation of hostilities could cause hundreds of thousands of additional people to flee their homes,” said Rehana Zawar, the organisation’s Syria director.

More than 400,000 people have been displaced by the fighting since late April, according to the United Nations. – Rappler.com