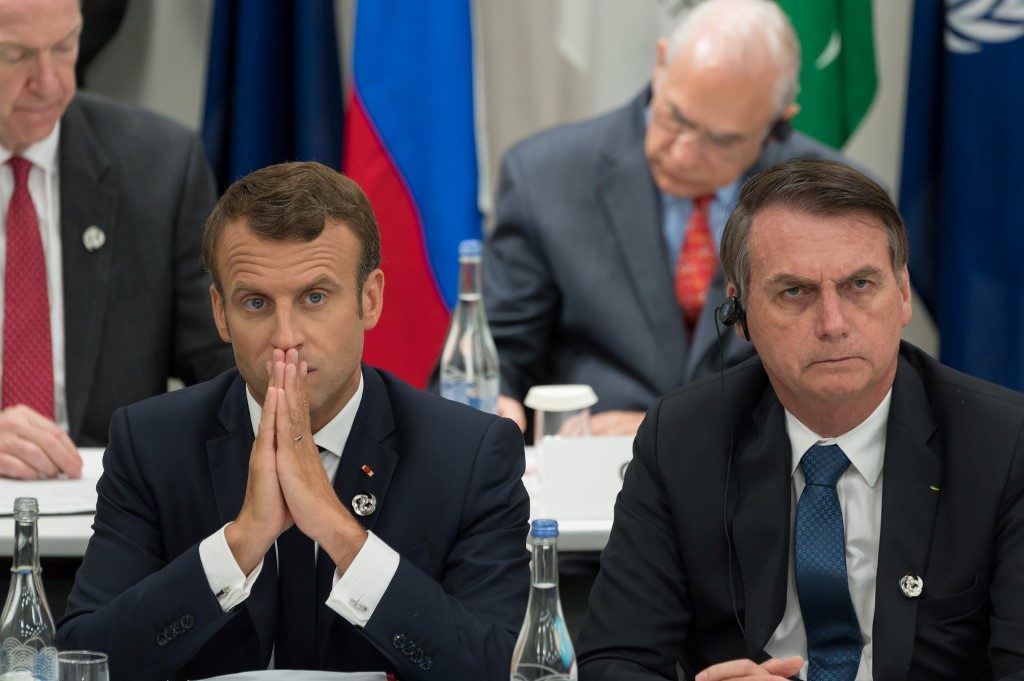 Plumes of thick smoke rose into the sky above dense forest in the northwestern state of Rondonia, where bright orange flames from various fires were visible for kilometers (miles), an Agence France-Presse (AFP) photographer reported.

“It’s not normal and it’s like this because of the smoke from the fires,” said a hotel employee in the state capital Porto Velho, which was covered by a layer of smoke as fires burned near the city.

The fires in the world’s largest rainforest have sparked street protests around the planet and ignited a war of words between Bolsonaro and his French counterpart Emmanuel Macron, who has described the wildfires as an “international crisis” and vowed to block a trade agreement between the European Union (EU) and South American countries.

The latest official figures show 76,720 forest fires were recorded in Brazil so far this year – the highest number for any year since 2013 – which experts blame on accelerating deforestation as land is cleared during the months-long dry season to make way for crops or grazing.

More than half are in the Amazon.

Around 700 new fires were ignited between Wednesday, August 21, and Thursday, August 22, according to the National Institute for Space Research (INPE), fueling air contamination in cities including Sao Paulo, where thick smog turned day into night on Monday, August 19.

After a late-night crisis meeting with members of his cabinet, Bolsonaro on Friday issued a decree permitting the deployment of armed forces to help extinguish fires and crack down on criminal activities in the region.

Bolsonaro’s decision came as demonstrations are held around the world over the fires in the Amazon forest, a region considered the “lungs of the planet” and seen as crucial to keeping climate change in check.

In an escalating public row over the blazes, Macron on Friday accused Bolsonaro of lying to him on Brazil’s stance on climate change.

France will now block a trade deal between the EU and the South American trade bloc Mercosur, which includes Brazil, a French presidential official said.

Ireland also threatened to block the deal, and Finland said it would propose to EU countries that they stop importing Brazilian beef.

Bolsonaro insisted that the fires should not be used as an excuse to punish Brazil.

“There are forest fires all over the world, and this cannot be used as a pretext for possible international sanctions,” Bolsonaro said in brief remarks on television Friday evening.

Macron had tweeted Thursday that the fires burning in the Amazon amount to an international crisis and should be discussed as a top priority when the G7 countries meet this weekend in France.

Bolsonaro then blasted Macron for having a “colonialist mentality.”

Environmental specialists say the fires have accompanied a rapid rate of deforestation in the Amazon region, which in July quadrupled compared to the same month in 2018, according to INPE data, which Bolsonaro previously described as lies and prompted the sacking of the agency’s head.

Bolsonaro instead attributes the blazes to increased drought, and accuses environmental groups and non-governmental organizations (NGOs) of whipping up an “environmental psychosis” to harm Brazil’s economic interests.

Earlier in the week, Bolsonaro accused NGOs of starting the fires.

Brazil’s powerful agriculture sector – a key supporter of Bolsonaro – has expressed concerns over the president’s rhetoric, fearing a boycott of their products in key markets.

Thomaz Favaro of Control Risks consultancy told AFP Bolsonaro’s comments were “raising the risks of sanctions and retaliation, including against the EU-Mercosur deal.”

“Brazil has gone from being a global model of forest conservation to an international pariah,” Robert Muggah, research director at the Igarape Institute, a think tank in Rio de Janeiro, told AFP.

Bolsonaro had given “ammunition” to countries opposed to the EU-Mercosur deal, said Oliver Stuenkel, professor of international relations at Getulio Vargas Foundation.

The mayor of Manaus, Brazil’s largest city in the Amazon, told reporters Friday the rainforest was “fundamental for the world.”

“The entire world demands sensible, intelligent, appropriate governance for the Amazon at the risk of regrettable consequences for our country,” Arthur Virgilio Neto said on the sidelines of a United Nations climate change workshop in the northeastern city of Salvador.

Neighboring Paraguay and Bolivia are also battling separate wildfires that have devastated large areas of their rainforests.

The Bolivian government on Friday took delivery of a “supertanker” aircraft to help extinguish fires that have destroyed around 7,770 square kilometers (3,000 square miles) of the eastern province of Santa Cruz for the past month. – Rappler.com