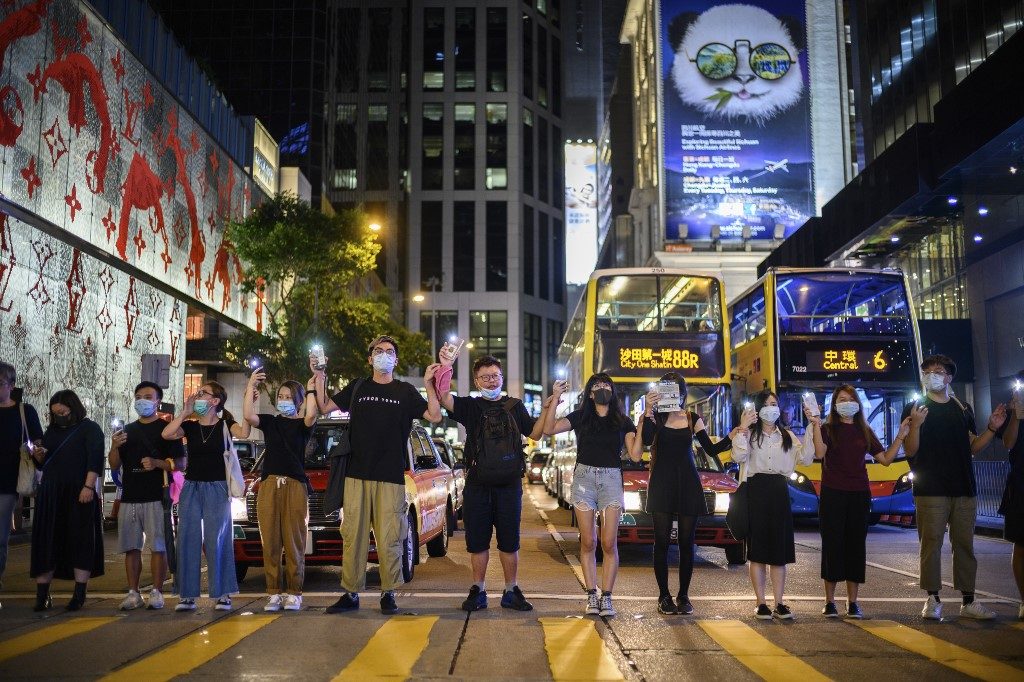 Facebook Twitter Copy URL
Copied
The Baltic Way was one of the largest ever anti-Soviet demonstrations, when more than one million people linked hands to form a human chain on August 23, 1989

The city’s skyscraper-studded harborfront as well as several busy shopping districts were lined with peaceful protesters, many wearing surgical masks to hide their identity and holding Hong Kong flags or mobile phones with lights shining.

The human chain is the latest creative demonstration in nearly 3 months of rolling protests which have tipped Hong Kong into an unprecedented political crisis.

“We have tried traditional marches, we have tried more militant acts – although I don’t agree with them – this time we are coming out together to join hands and show that we are all still united,” Wing, who gave only her first name, told Agence France-Presse (AFP).

The protests started against a bill that would have allowed extradition to China, but have transformed into a wider rejection of Beijing’s increasingly tight grip on the semi-autonomous city and a defense of its unique freedoms.

“By doing this, we are showing people around the world the high quality of Hong Kongers. What people did 30 years ago, we can also do,” said Cat Law, a logistic worker in her 60s.

The Baltic Way was one of the largest ever anti-Soviet demonstrations, when more than one million people linked hands to form a human chain spanning over 600 kilometers (370 miles) on August 23, 1989.

Three decades on, the moving show of solidarity continues to inspire activists across the world.

The “Hong Kong Way” was called by the social media-driven protesters who have turned for the last several days to non-violent means of making their voice heard.

Protesters young and old chanted “Free Hong Kong” as well as the protest rallying cry “Hong Kong, add oil,” while hand sanitizer was passed along the chains in the famously fastidious city.

Protests had previously slipped into violence, with running street clashes between police and a minority of hardcore demonstrators bringing chaos to a city normally associated with safety and stability.

But an uneasy peace was maintained through a week which started with a huge rally on Sunday, August 18, hailed by organizers as proof the movement still draws widespread public support.

Yet Hong Kong remains a city divided. Anger against the government and police runs deep among protesters who are exhausted after months on the street but still conducting near daily actions.

Protesters have called for an attempt Saturday, August 24, to blockade routes to the city’s airport – a potential flashpoint if large numbers come out.

Eight thousand kilometers away in the Lithuanian capital of Vilnius – one of the sites of the original anti-Soviet Baltic Way protest – a few hundred people staged a rally in support of the Hong Kong protesters, linking hands in the central square.

“We have to show solidarity with the Hong Kongers! They are at the frontline of fighting for freedom and democracy,” opposition lawmaker Mantas Adomenas, who helped organize the rally, told AFP.