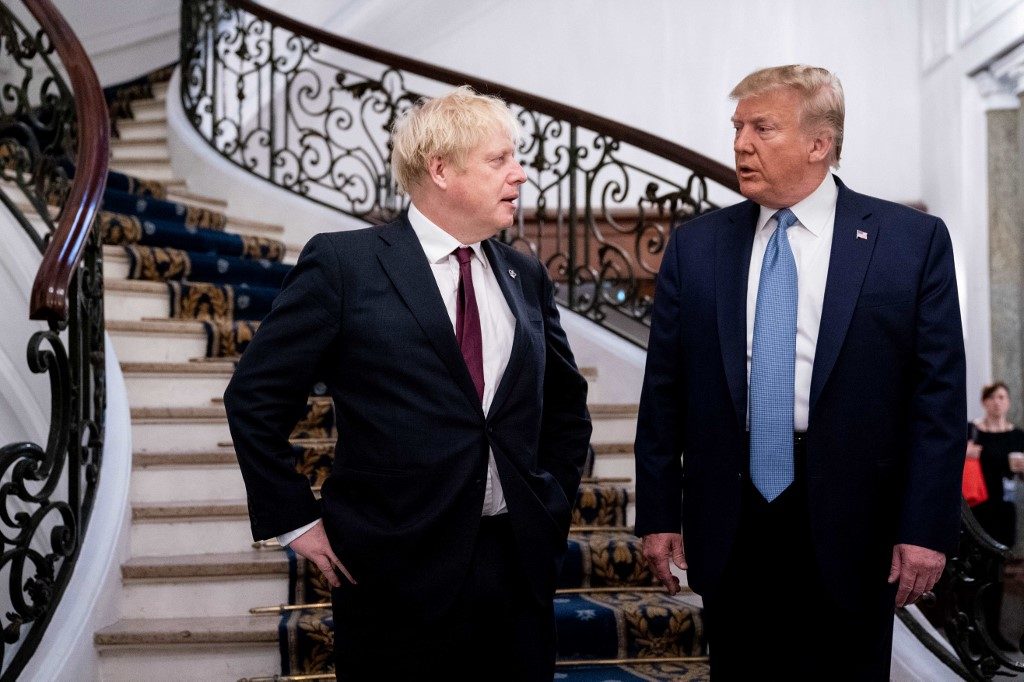 BIARRITZ, France (UPDATED) – US President Donald Trump on Sunday, August 25, backed British Prime Minister Boris Johnson as the “right man” for Brexit and sent mixed signals about his trade war with China at a G7 summit dominated by worries about the global economy.

Johnson and Trump were on obviously friendly terms as they sat down for a working breakfast in the southern French resort of Biarritz where Group of Seven leaders are gathering this weekend.

“He’s going to be a fantastic prime minister,” Trump said in their first meeting since Johnson took office last month.

Asked what his advice was for Brexit, Trump replied: “He needs no advice. He’s the right man for the job. I’ve been saying that for a long time.”

In the lead-up to the talks, Johnson had appeared at pains to distance himself from Trump after facing accusations in the past of being too cosy with the American leader.

And at their meeting, Johnson again pressed a common message from European leaders at the summit about Trump’s escalating trade war with China. (READ: Johnson seeks to push Trump at fractious G7)

“Just to register a faint, sheep-like note of our view on the trade war – we are in favor of trade peace on the whole,” Johnson told Trump.

The 73-year-old US leader promised Johnson “very big trade deal, bigger than we’ve ever had”, but couldn’t resist another undiplomatic dig at the European Union.

Trump compared it to an “anchor around their ankle.”

But to the relief of his partners, Trump also appeared to back off from a threatened further escalation in his battle with China.

“I think they respect the trade war. It has to happen,” Trump told reporters.

The Basque resort of Biarritz, which at this time of year usually teems with surfers and sunbathers, has been turned into a fortress for the G7 event with over 13,000 police on duty.

An anti-capitalism demonstration in nearby Bayonne turned ugly Saturday night when the crowd of several hundred tried to get through police barricades and was repelled with water cannon and tear gas.

Earlier on Saturday, organizers in the French border town of Hendaye said 15,000 people rallied in a peaceful march over the Bidassoa River towards the Spanish town of Irun. (READ: Protests to greet G7 leaders as they discuss Amazon fires, trade)

G7 summits, gathering Britain, Canada, France, Germany, Italy, Japan and the United States, were once a meeting of like-minded allies, but they have become a diplomatic battlefield in the Trump era.

“This may be the last moment to restore our political community,” EU Council president Donald Tusk said on Saturday.

Over an open dinner dinner of red tuna at the foot of a landmark lighthouse in the famed surf town of Biarritz, the leaders began talks on Saturday night attempting to narrow their differences.

The US-China trade war, but also fires in the Amazon and the Iranian nuclear crisis, were on the menu.

“You did very well last night President Macron,” Johnson told his French host as the leaders met for a session to discuss the world economy. “That was a difficult one.”

In a sign of the difficulties, Macron thought he had agreed a common G7 position on Iran to try to find a way out of the current impasse that has seen tensions spiral in the Middle East.

Macron said in an interview to French television that they had “agreed on what to say to Iran”.

But Trump, who has previously accused Macron of sending “mixed signals” to Iran, denied it.

“We’ll do our own outreach. But you can’t stop people from talking. If they want to talk, they can talk,” he said.

In a radical break from previous meetings of the elite club, there is to be no final statement at the end of the talks on Monday, an admission of lowered expectations.

Macron has also invited several world leaders from outside the G7 such as India’s Narendra Modi and Egyptian President Abdel Fattah al-Sisi who will join the meeting on Sunday.

Macron is also pushing for action against fires in the Amazon rainforest, despite Brazilian right-wing President Jair Bolsonaro’s angry response to what he sees as outside interference. – Rappler.com