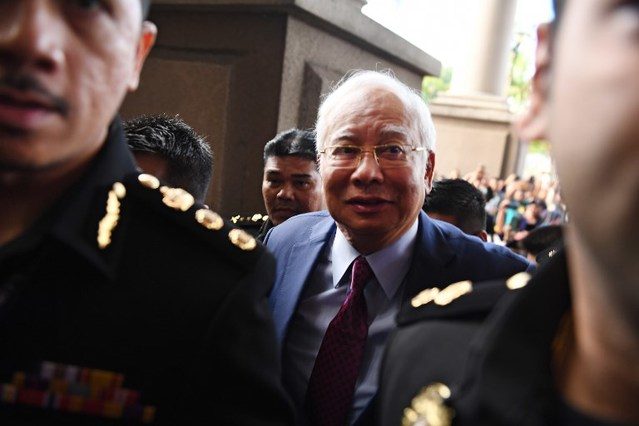 Facebook Twitter Copy URL
Copied
With the prosecution now finished, a judge will hear arguments from both sides in October and rule on November 11 whether the case is strong enough to continue

KUALA LUMPUR, Malaysia – Malaysian prosecutors Tuesday, August 27, wrapped up the first of several cases against toppled leader Najib Razak over the plundering of 1MDB, a day before the start of his main trial linked to the scandal-hit fund.

With the prosecution now finished, a judge will hear arguments from both sides in October and rule on November 11 whether the case is strong enough to continue.

If he rules it is, Najib will likely begin his defense in December.

The former prime minister, his family members and inner circle are accused of stealing billions of dollars from the sovereign wealth fund 1MDB in a fraud that stretched around the world.

The claims played a major part in Najib’s government losing power at elections last year. He was arrested after being ejected from office, and went on trial in April.

The current trial is the first of several that Najib is expected to face over 1MDB, and centers on claims that 42 million ringgit ($10 million) was stolen from SRC International, a former unit of the fund.

The prosecution called 57 witnesses during the first stage of the trial and the court heard evidence about the lavish lifestyle enjoyed by Najib and his widely reviled wife, Rosmah Mansor, after allegedly looting state coffers.

Najib has denied all charges.

The 66-year-old’s biggest trial over 1MDB will begin Wednesday, August 28, centering on allegations that hundreds of millions of dollars linked to the fund were transferred to his bank account. – Rappler.com