Justin Trudeau returns to campaign with promise of lower taxes 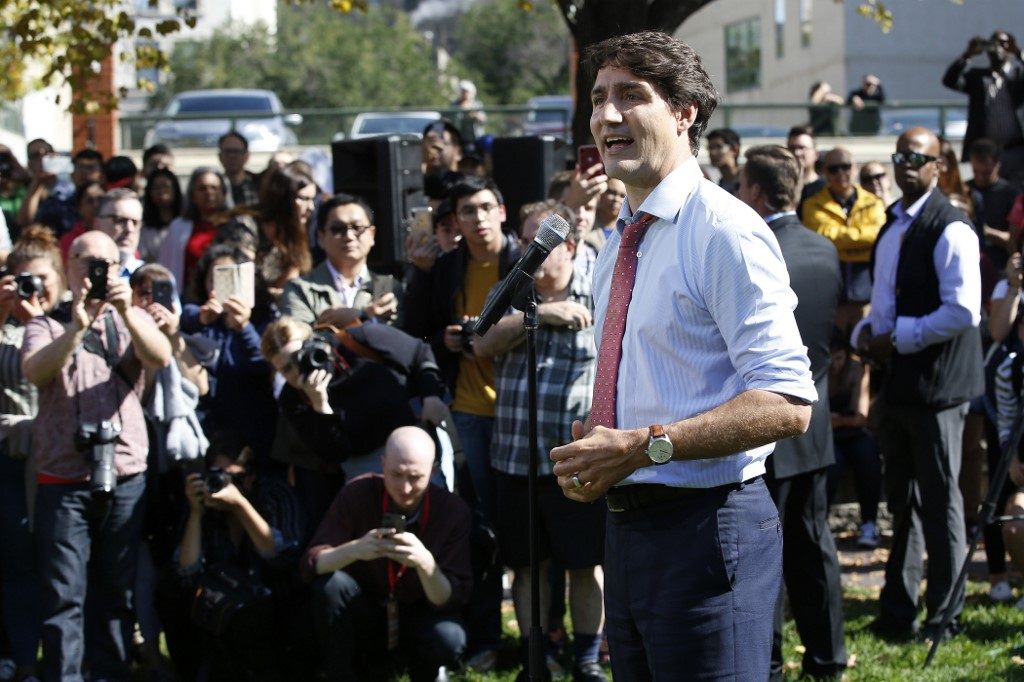 Facebook Twitter Copy URL
Copied
If he is reelected, Trudeau says middle-class Canadians would not pay taxes on the first Can$15,000 ($11,300) they earn

MONTREAL, Canada – Canadian Prime Minister Justin Trudeau on Sunday, September 22, resumed his re-election campaign with a promise to lower taxes, but once again had to apologize for a photo showing him in blackface makeup.

Trudeau, 47, was already under fire for an ethics lapse and other controversies, and the decades-old photos and videos that resurfaced last week of him engaging in activities he has acknowledged as “racist” dealt a fresh blow to his chances.

After taking Saturday off, Trudeau traveled to Brampton on Sunday, in the central province of Ontario, where he announced two concrete measures aimed at wooing middle-class voters, the main targets of both his Liberal party and opposition Conservatives in the October 21 elections.

He also promised to cut Canadian cell phone plan costs, which he called “among the most expensive in the G7,” by 25 percent.

These two measures would “put more than Can$1,500 a year back in the pockets of Canadian hard-working families,” he said.

His main opponent, Conservative Andrew Scheer, has also promised his government would “put money back into Canadians’ pockets.”

Trudeau then gave a press conference during which he faced a barrage of questions about the photos and videos that appeared in media outlets Wednesday showing him dressed in blackface or brownface on multiple occasions between the 1990s and in 2001.

“As a country, we need to keep working for diversity, working to fight racism and intolerance,” he said.

“As an individual, I have to keep having extremely important conversations about choices made in the past and how I earn, once again, the trust of Canadians that I hurt.”

The opposition has heavily criticized Trudeau, who as prime minister has presented himself as a champion of multiculturalism and a fighter of racism and discrimination.

Accused of hypocrisy, Trudeau has apologized for the images, blaming the costume choice on youthful ignorance.

According to multiple opinion polls published this weekend in Canadian media outlets, the Conservatives appear to have taken a slight lead over Trudeau’s Liberals since the scandal.

Although the two parties were neck-and-neck at the start of the campaign, the Nanos Institute on Sunday tipped in favor of the opposition, with 35.5% of Canadians saying they would vote for the Conservatives, versus 32.9% for the Liberals.

Results from the same poll, however, show Trudeau remains the top choice to become the next prime minister, with 31.5% of Canadians favoring him compared to 29.2% for his main opponent.

Public broadcaster CBC’s poll aggregator also showed a spread of 34.6 percent for the Conservatives versus 32.9 percent for the Liberals, while a Forum Research study conducted after the images surfaced and published Sunday by the Toronto Star puts the two main parties on equal footing at 33 percent each. – Rappler.com